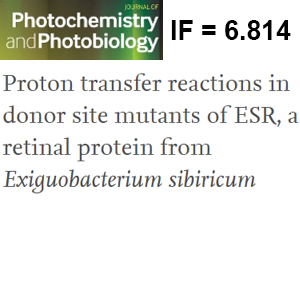 Microbial rhodopsins are integral membrane proteins that contain the retinal chromophore and perform light-dependent ion transport or other functions. The interest in them is largely explained by the perspectives for use in optogenetics in order to regulate the neuronal activity, including for the treatment of various diseases. A team of scientists from the Laboratory of protein engineering and the Group of nanobioengineering of the ICBh RAS has been studying the rhodopsin from Exiguobacterium sibiricum (ESR) for many years. The presence of a lysine residue at position 96 corresponding to the internal proton donor for the Schiff base distinguishes it from bacteriorhodopsin (BR), the most studied retinal protein. In a new study, carried out in collaboration with colleagues from other Russian and foreign institutions, authors have shown that Asp or Glu residues in this position effectively perform the function of a donor in the ESR molecule. However, the kinetics of the photocycle and charge transfer in mutants differ significantly from BR, indicating an alternative mechanism for reprotonation of the Schiff base in ESR. The results are published in the J Photochem Photobiol B.