The unit was disbanded in 2018. It is part of the unit Laboratory of molecular design and synthesis.

The laboratory conducts experiments to search for the possible conditions of abiotic synthesis of adenosine and adenosine monophosphate, as well as work on the properties, synthesis and possible use of ionic liquids - a fundamentally new type of solvents.

Moreover researchers are engaged in the creation of fluorescent probes for DNA, anesthetics and muscle relaxants new generation, as well as developing methods for the determination of drugs.

The Laboratory was founded on the basis of organic synthesis Group (worked since 1994) in 2010.

• A new preparative method for the synthesis argiope, synthesized 100 g of this natural toxin. Founded method was used in the synthesis of argiope analogues.

• Synthetic schemes were developed and synthesis of haptens were conducted, which play an important role in an enzyme immunoassay toxic components of household detergents that pollute the environment, modern pesticides and antibiotics.

• The methods of synthesis were designed and photoswitchable protein fragment to create a controlled secondary structure elements was received; photoactivated labels for studies of receptor systems; fluorescent labels for the study of structure and functions of nucleic acids; photosensitizing agents; fluorescent indicators.

• As a part of the Program of the Presidium of the RAS "Biosphere Origin and Evolution" were analyzed the abiogenous variations of the adenine formation conditions and condensation of adenine with ribose and ribosophosphate using the methods of computer synthesis; monosaccharides library were formed, methods of determining the methods of gas chromatography-mass spectrometry and GLC were developed.

• New subclass of modified nucleosides having high activity against enveloped viruses was founded. Peruse detected earlier (Bioorgan. Chemistry, 29 (3), 289-294 (2003), Nucleosides, Nucleotides & Nucleic Acids, 24 (5/7), 923-926 (2005), Tetrahedron, 62 (6), 1279 -1287 (2006) Problems of Virology, 2006 (1), 34-38, Org. Biomol. Chem., 4 (6), 1091-1096 (2006)) identified a class of antiviral compounds from the group of substances active against enveloped viruses. Specifically, IC50 5- (perylene-3-yl) ethynyl-2'-deoxyuridine was 50 nmol / L for herpes simplex virus type 1 and 180 nmol / L for hepatitis C. A characteristic feature of active nucleosides structure is the availability of an aromatic residue hydrocarbon perylene rigidly attached to the nucleobase via a triple bond. It is suggested that the unique structure of the resulting compounds is responsible for their incorporation into the virion membrane, resulting in the fusion of the virion to the cell (infection) becomes very disadvantageous process (Figure). The novel compounds practically cytotoxic. 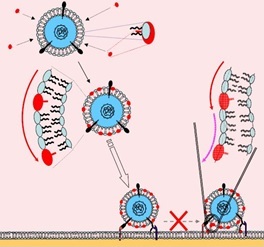