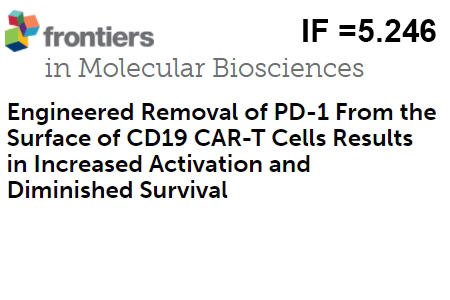 A promising approach in tumor therapy is the use of T cells armed with the recombinant Chimeric T cell Receptors (CAR). Unfortunately, the CAR-T cell therapy is effective currently only for the treatment of hematologic malignancies. The major issue that limits practical usefulness of the CAR-T technology is cancer microenvironment, which suppresses activation of the CAR-T cells. A collaboration of scientists from IBCh RAS and other Russian and foreign institutes has modified T cells with CD19-CAR and reduced the expression PD-1 at the same time. Unexpectedly, despite increased activation of CAR-T cells with low level of PD-1, these T cells had reduced survival and diminished cytotoxicity. This work was supported by the Ministry Education and Science of the Russian Federation (Grant No. 075-15-2020-773) and published in Frontiers in molecular biosciences. Learn more