Born: April 25, 1979 (Moscow). Graduated from bioclass of Moscow high-school 1543. From 1996 to 2001 studied at the Higher Chemical College of the Russian Academy of Sciences. While being a student worked at N. D. Zelinsky Institute of Organic Chemistry and A. N. Nesmeyanov Institute of Organoelement Compounds. Since 2002 works at M.M. Shemyakin and Yu. A. Ovchinnikov Institute of Bioorganic Chemistry of the Russian Academy of Sciences. In 2009 received PhD degree in biochemistry for studying chemical structures of the chromophores of GFP-like fluorescent proteins.

Biosynthetic mechanism of chemically unstable acylimine chromophore of red fluorescent proteins was investigated. This required development of new synthetic strategy to 2-acylaminoimidazolones - biosynthetic precursors of 2-acyliminoimidazolones. We have shown spontaneous oxidation of precursors with air oxygen by unusual mechanism. 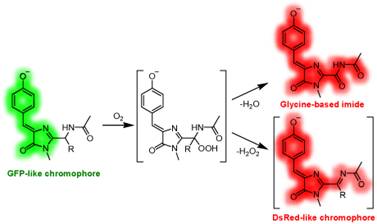 Total synthesis of chromophores of GFP-like fluorescent proteins was used as a tool for independent structure determination of these chromophores. Also, this allowed to study structure-spectral properties relationship within this range of imidazole derivatives and to develop novel synthetic approaches to 2-functionalized arylideneimidazolones. Chromophores of AsFP595, Kaede and YFP538 were synthesized.

A blue proteinaceous pigment from Rhizostoma pulmo (jellyfish from the Black Sea) was isolated, sequenced and studied by biochemical methods. An attempt to determine the nature of the blue coloration (chromophore) was unsuccessful.