Today the Laboratory of Biological Testing is the most titled in the Russian Federation in the field of non-clinical research. Since 2005, it has been accredited by Association for Assessment and Accreditation of Laboratory Animal Care International (AAALAC International). In 2013, the Laboratory was officially recognized as conforming to the principles of good laboratory practice (GLP) by the Slovak National Accreditation Service (SNAS), which allows us to declare that the results of non-clinical studies carried out in it can be recognized in the countries of the Organization for Economic Cooperation and Development (EU countries, USA, Canada, etc.). In addition, the Laboratory was the first laboratory that received recognition of compliance with GLP principles by the Russian monitoring agency – the Federal Accreditation Service, and therefore the work on the creation of the National GLP system was completed in Russia.

Now the Laboratory together with MIPT and the Research Institute of Medical Primatology organized two geographically remote platforms. Thus, a center was formed that performs a full cycle of non-clinical studies in accordance with the principles of GLP. Thanks to this center in Russia, it was possible to export both the products that were examined in this center and services for non-clinical research for foreign customers, and also participate in complex international programs on the study of medicines, pesticides, cosmetic products, veterinary drugs, food and fodder additives, industrial chemicals. 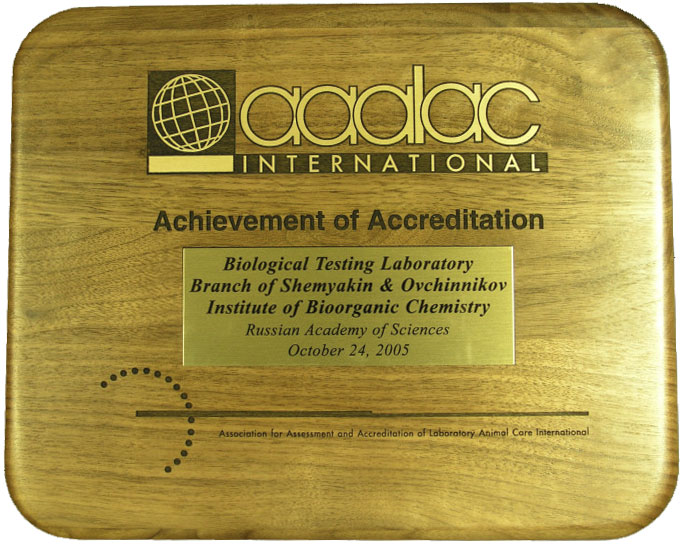 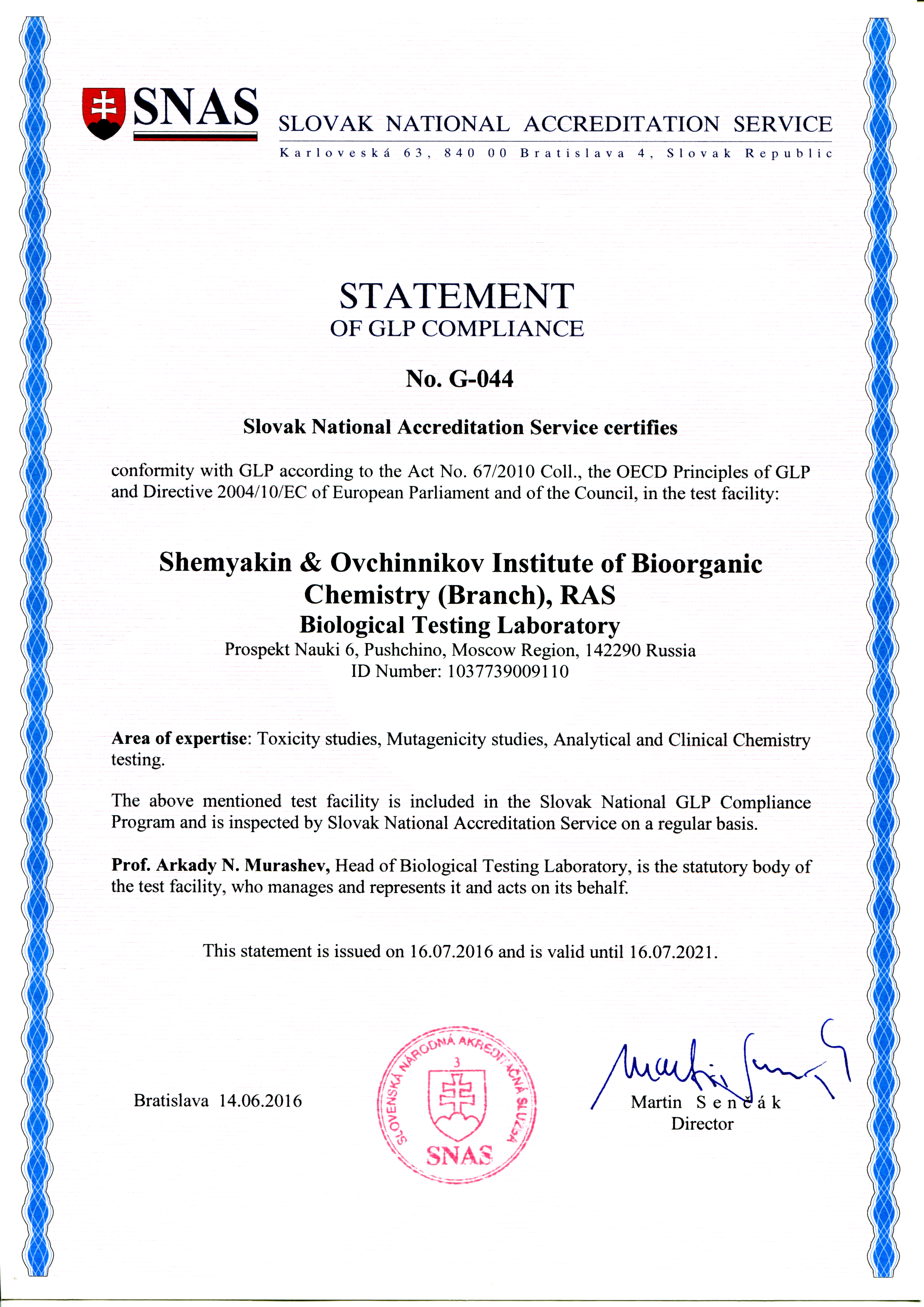 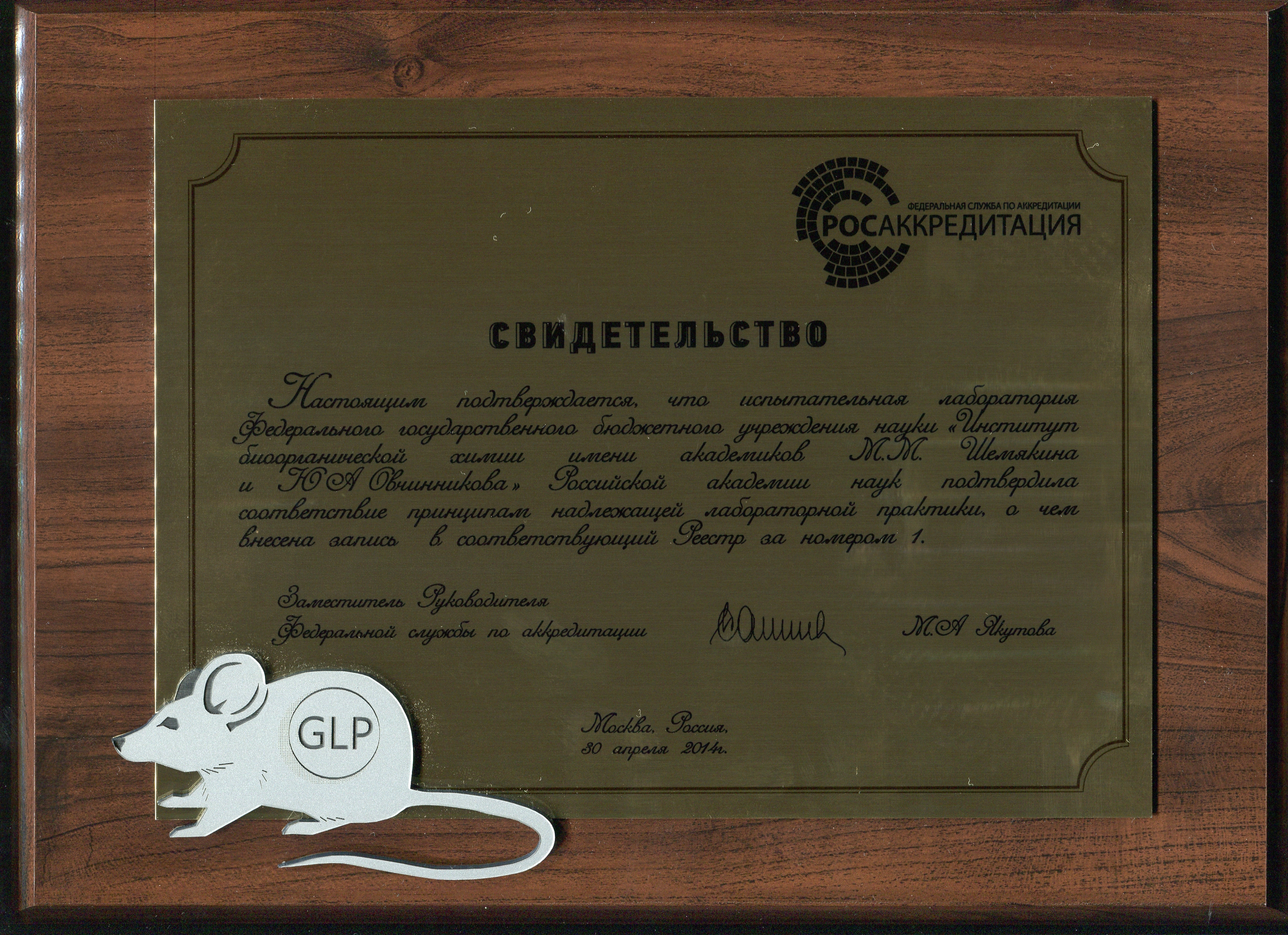 New analgesic drugs suitable for oral use have been developed 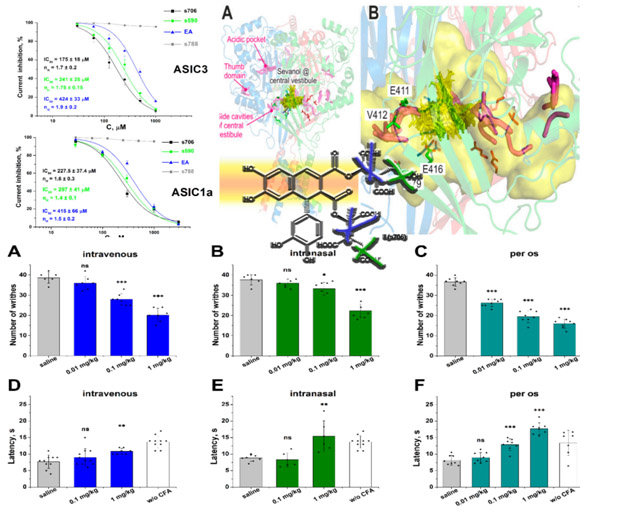 Among acid-sensitive ion channels (ASIC) the ASIC1a and ASIC3 subunits are the most attractive pharmacological targets. The inhibition of these channels by specific ligands can treat many socially significant diseases, such as chronic and pathological pain, ischemic stroke, and Parkinson's disease. Sevanol, a natural lignan isolated from Thymus armeniacus, inhibits the activity of ASIC1a and ASIC3 isoforms and has a significant analgesic and anti-inflammatory effect. However its production by chemical synthesis is a labor and material consumption process from many stages. The structure-functional investigation  allowed to minimize the structure of Sevanol and to keep both analgesic activity in animal models, and ASICs inhibitory effect for analogs. The location of Sevanols binding site in the Central vestibule of ASIC1a was predicted in mathematical modeling experiment and its competition with the FRRF-amide peptide for this binding site was proved by electrophysiology. Sevanols analogues had a significant analgesic and anti-inflammatory effect in animal models by various administration routes- intravenous or intramuscular (parenteral methods), as well as intranasal or oral (non-invasive methods). Cozy synthesis method developed for each analogs allow us to recommend these molecules as potential prodrugs, since the absence of side effects identified at this moment together with oral activity are potent competitive advantages of new molecules to existent analgesic drugs. The results were published in Pharmaceuticals (Basel) journal.

Three-finger neurotoxins and new analogues of bradykinin-potentiating peptides were found in the venom of vipers for the first time, using transcriptomics and quantitative proteomics 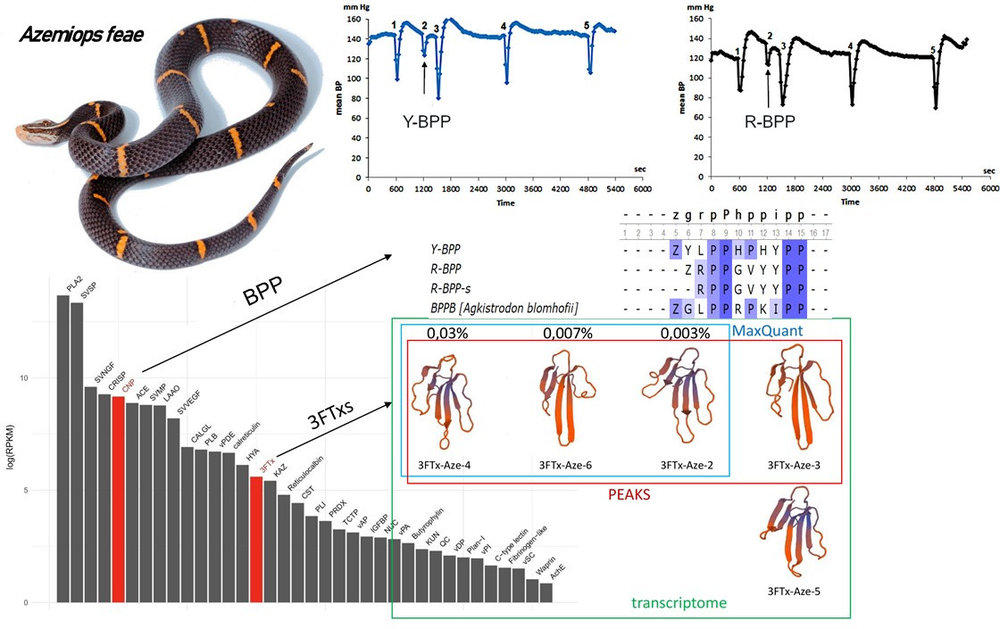 From Azemiops feae viper venom, we have isolated previously azemiopsin, a new neurotoxin, that inhibited the nicotinic acetylcholine receptor. To characterize other A. feae toxins, quantitative proteomics was used and 120 unique proteins were identified. In total, identified toxins represented 14 families, among which bradykinin-potentiating peptides with unique amino acid sequences were found and manifested biological activity in vivo. Proteomic analysis also revealed non-conventional three-finger toxins belonging to the group of toxins with neurotoxic activity. This is the first indication of the presence of three-finger neurotoxins in viper venoms. In parallel, transcriptome analysis of the venom gland was carried out by the next generation sequencing, and additionally identified 206 putative venom transcripts. Together, the study unveiled the venom proteome and venom gland transciptome of A. feae which in general resemble those of other snakes from the Viperidae family. However, new toxins not found earlier in viper venom and including three-finger toxins and unusual bradykinin-potentiating peptides were discovered.

In collaboration with Laboratory of hormonal regulation proteins 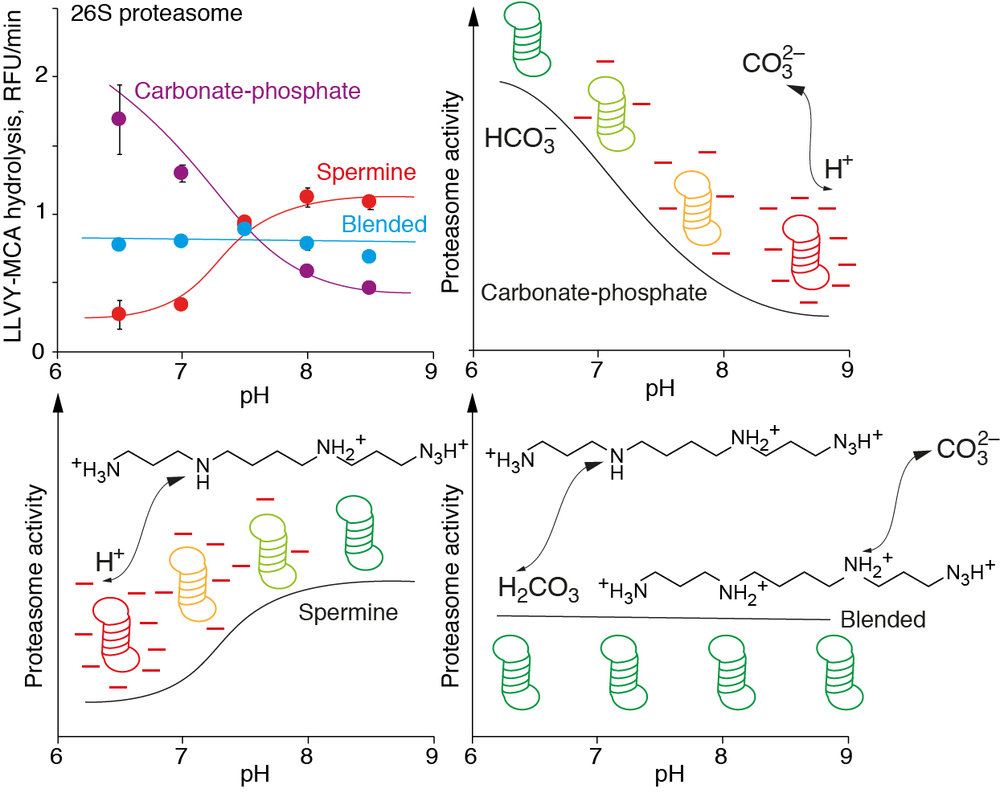 Anionic buffers such as phosphate or carbonate inhibit proteasome activity during alkalization. Importantly, supplementation of a carbonate–phosphate buffer with spermine counteracts carbonate-driven proteasome stalling in alkaline conditions, predicting an additional physiological role of polyamines in maintaining the metabolism and survival of cancer cells.

The physiological effect of two bisbenzylisoquinoline alkaloids having activity on ASIC1a 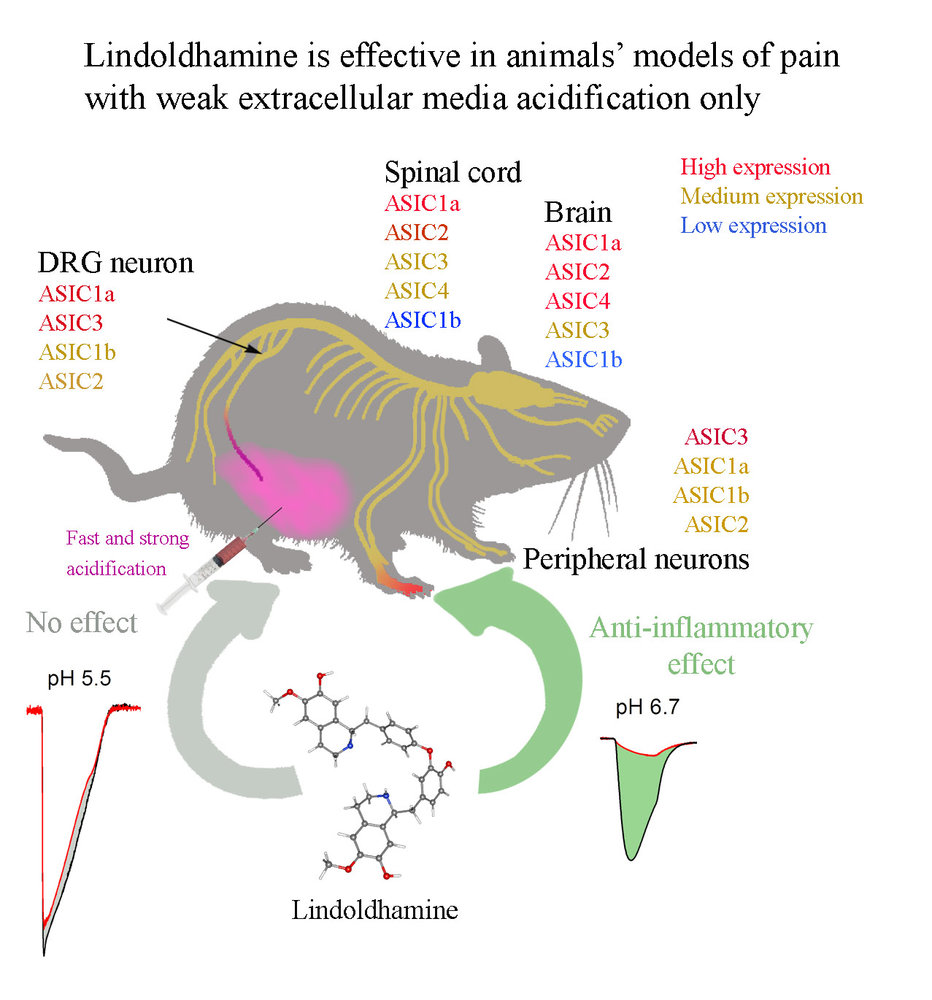 The ASIC1a is the most sensitive subtype of acid-sensing ion channel in the cell membrane, and it plays an important role in the excitation of neurons of CNS. Long time the ligands to this ASIC subtype are under intense attention for the development of drugs for pain relief, as well as protectors from strokes and neurodegenerative diseases. In in vitro experiments on heterologically expressed ASIC1a channels, the action of two bisbenzylisoquinoline alkaloids from plants was studied by electrophysiological method of two-electrode potential fixing on oocyte cells.

The alkaloid lindoldhamine extracted from the leaves of Laurus nobilis L. significantly inhibited the ASIC1a channel’s response to physiologically-relevant stimuli of pH 6.5–6.85 with IC50 range 150–9 µM, but produced only partial inhibition of that response to more acidic stimuli. In mice, the intravenous administration of lindoldhamine at a dose of 1 mg/kg significantly reversed complete Freund’s adjuvant-induced thermal hyperalgesia and inflammation; however, this administration did not affect the pain response to an intraperitoneal injection of acetic acid. Thus, it was shown not only a prospective of plant alkaloids using for a pain relief, but was indirectly confirmed the involvement of the ASIC1a channels of the peripheral nervous system in the generation of a pain response to mild acidification.

The structural analogue named daurisoline, unlike lindoldamine, did not inhibit the activation of the ASIC1a channel by protons, but produced the second peak component of the ASIC1a current. This second peak manifested with a 2.5 seconds delay after the first fast respond followed by completely desensitization with the same kinetics as the main peak. The presence of second current components was specific characteristic of ASIC2 and ASIC3 subtypes early, but this component is sustained, that last all time while the acid stimulus presented. The discovery of the second component of ASIC1a current allows us to declare the common mechanism of opening and desensitization for all ASICs, which will be interesting to determine in further experiments.

In collaboration with Laboratory of pharmacokinetics,  Group of Peptide Chemistry

The relative efficacies of several synthesis methods have been investigated aiming to prepare target peptides that are quite potent in a test for suppression of the experimental autoimmune encephalomyelitis. Toward this goal chemical yields of the target peptides as well as side product distributions in the samples of the peptides obtained using various methods have been evaluated and quantitatively characterized. A variation of Fmoc/tBu methodology have been found to be the most efficient providing targets peptides in the highest chemical yield since it allowed to use a broader range of  activated amino acid derivatives. Side products of the amino acid doubling were detected among the side products of chemical synthesis. Some of the amino acid doubling side products made the HPLC purification step to be complicated. Nevertheless the synthetic methods developed allowed the preparation of the target peptides in sufficient quantities.

Development of peptide drugs for the treatment of multiple sclerosis 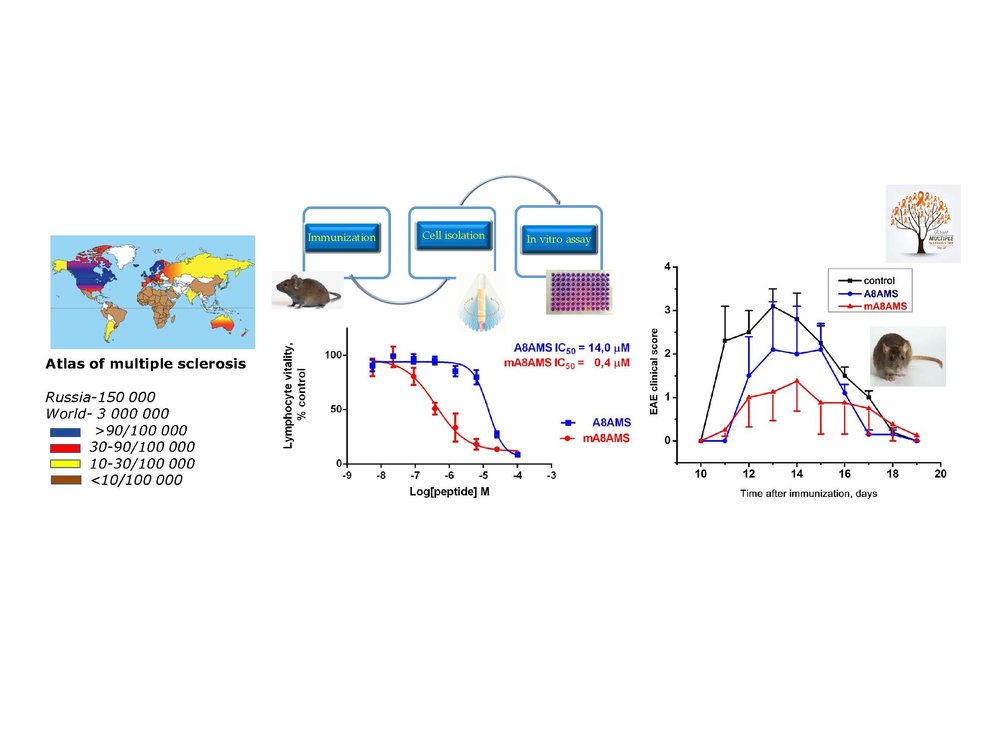 Multiple sclerosis is a chronic autoimmune disease with neurological pathology. The dominant role of immunological processes in the development of the disease dictates the need for medications that specifically minimize the activity of immune processes. The peptides A8AMS and mA8AMS, homologous to the fragment of the human IgG VH domain, have been shown to act in vitro and in vivo, effectively reducing the symptoms of experimental autoimmune encephalomyelitis, an animal model of multiple sclerosis. The results provide new opportunities for the development of peptide drugs for the treatment of multiple sclerosis.