GMBS was established de facto in 1979, when Yu.A. Ovchinnikov, vice-president of Academy of Sciences of USSR ordered N.N., Modyanov to organize a new scientific group to pursue a new direction of research primarily aimed at molecular basis of ion transport across biological membranes. On May 19, 1986, the group was given a formal status as a division of Shemyakin Institute of Bioorganic Chemistry - that day may be celebrated as the beginning of its official history. Major efforts of the group were directed towards structure-functional aspects of ion-transporting ATPases, especially of the Na,K-ATPase In colloboration with E.D. Sverdlov, primary structures of α and β-subunits of Na,K-ATPase from pig kidney were determined by DNA sequencing for the first time, independently from and nearly simultaneously with competing groups from USA and Japan, which were studying similar objects from different species. The resulting paper, published in FEBS Letters, was cited by other scientists several hundred times. This success inspired further studies including investigations of Na,K-ATPase transmembrane fold – an absolutely mysterious aspect of molecular organization at that time. For this purpose, various experimental approaches were used, such as limited proteolysis, hydrophobic photoactivatable labeling, vectorial iodination by lactoprexidase, as well as the use of site-specific monoclonal antibodies. A parallel research direction lead to the discovery of novel homologous X,К-ATPase genes, for example, ATP1AL1, later shown to be a novel enzyme, termed nongastric Н,К-ATPase. From 1986 to 1992 the group was one of the leaders among divisions of the Shemyakin Institute as judged by the number of papers in peer-reviewed journals.

A new stage began in 1992 coinciding with unexpected break-up of the USSR and simultaneous departure of of more than half of the group's staff to USA. By now, most of them have built highly successfull careers in science, suffice it to mention Nikolay Modyanov (Toledo University), Svetlana Lutsenko (Oregon Health Science University), Konstantin Petrukhin (Merck Research Laboratories), Alexander Grishin (Mount Sinai School of Medicine), Grigory Belogrudov (University of California, Los Angeles), Elena Arystarkhova (Massachusetts General Hospital and Harvard Medical School).

Remaining collegues had to exert extraordinary efforts in order to prevent the group from disintegration. The leadership was taken by M.I. Shakhparonov, appointed acting head on January 4, 1993, and the official group head from December 30, 1994, whereas the division was officially renamed as Group of Membrane Bioenergetic Systems (November 2, 1994). A deep reorganization was to follow that would help to preserve and raise scientific level by means of acquisition of new equipment and application of modern methods. Thus the group transformed into a highly dynamic, creative and solidary body. The ever persisting dearth of adequate funding was partly alleviated by grants from Russian Foundation for Basic Research, Russian Ministry of Science, Soros International Foundation, INTAS and CRDF.

In recent years, new perspectives have been found and the spectrum of GMBS investigations has been significantly widened thanks to old partnerships and also new ones in Russia and abroad. Especially important, pleasant and fuitful were colloborations with groups of N.N. Modyanov (University of Toledo, USA), K. Geering (University of Lausanne, Switzerland), J. Rydstrom (Goteborg University, Sweden) and E.D. Sverdlov (Shemyakin-Ovchinnikov Institute).

Members of GMBS together with post- and undergraduate students have been studying the diversity of X,К-ATPase isoforms, such as nongastric H,K-ATPase. An important point was the discovery of a new isoform of its β-subunit, termed βm, which possesses some unusual properties. Versatile studies of proton-transporting transhydrogenase, an interesting enzyme of bacteria and mitochondria, constituted another important research field of GMBS. In collaboration with the group of prof. Pepe (Australia) and prof. Ridstrem (Sweden) we have shown the role of transhydrogenase in maintaining antioxidant mitochondrial protection during heart failure.

On November 01, 2009 GMBS was split into two groups: GMBS and Group of Cross-Linking Enzymes (GCLE). GMBS and GKSF continued the established lines of investigation and alo entered several new areas. Main achievements include identification of new protein interactors of lysyl oxidase (LOX), a protein cross-linking enzymes. The most promising protein was p66-β, a component of the nucleosome-remodeling complex Mi2 / NuRD. Studies on the second interesting cross-linking enzyme, transglutaminase TG2, allowed developing a fundamentally new method of detecting its conformational dynamics in living cells. It has been shown that apoptosis activation changes conformation of cytoplasmic TG2 whereas endosomal TG2 remains in a state that lacks the transamidation activity. We succeeded in demonstrating that the interaction of survivin-Ran is extremely important for the resistance glioblastoma, a highly aggressive tumor, to therapy. Disruption of the survivin-Ran complex by a small molecule inhibitor of this protein-protein interaction LLP-3 interferes with the survival and growth of glioblastoma cells both in vitro and in vivo. Further, the phenotype of glioblastoma cells was shown to depend on the proteins that regulate alternative splicing.

Significant differences in the expression of splicing factors between proineuronal and mesenchymal stem cells of glioblastoma have been revealed. It has been demonstrated that protein regulators of splicing play an important role in signaling between tumor cells, and this signaling is carried out by extracellular vesicles.

Antiviral compounds based on 5-(perylen-3-ylethynyl)uracil scaffold

In collaboration with Laboratory of molecular design and synthesis 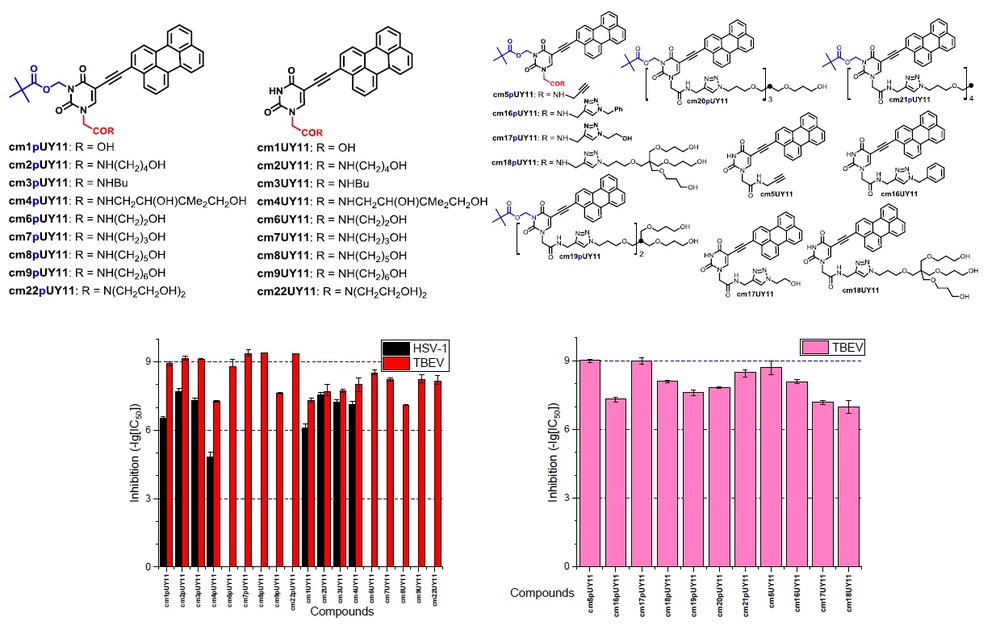 Rigid amphipathic fusion inhibitors (RAFIs) are potent antivirals based on a perylene core linked with a nucleoside moiety. Sugar-free analogues of RAFIs, 5-(perylen-3-ylethynyl)uracil-1-acetic acid and its amides were synthesized using combined protection group strategy. Compounds appeared to have low toxicity on porcine embryo kidney (PEK) or rhabdomiosarcoma (RD) cells together with remarkable activity against enveloped tick-borne encephalitis virus (TBEV): EC50 values vary from 0.077 μM to subnanomolar range. Surprisingly, 3-pivaloyloxymethyl (Pom) protected precursors showed even more pronounced activity. The propargylamide of N3-Pom-protected 5-(perylen-3-ylethynyl)uracil acetic acid, a universal precursor, was used in CuAAC click reaction for the synthesis of several derivatives including three ramified molecules with high activities against tick borne encephalitis virus (TBEV). Pentaerythritol-based polyazides were used for the assembly of molecules containing 2…4 antiviral 5-(perylen-3-ylethynyl)uracil scaffolds, the first examples of polyvalent perylene antivirals. Four prepared compounds, including one ramified cluster, showed remarkable 1…3 nM EC50 values against TBEV in cell culture. The results suggest that the carbohydrate moiety of RAFI nucleosides does not play a crucial role in their antiviral action, and biological activity of the 5-(perylen-3-ylethynyl)uracil scaffold can be effectively modulated by substituents in positions 1 and 3. The high antiviral activity of new compounds, coupled with low toxicity advocate their potential role in antiviral therapy. The antiviral evaluations were performed in Chumakov Institute of Poliomyelitis and Viral Encephalitides.

In collaboration with Laboratory of membrane bioenergetics

A novel mechanism of communication between tumor cells mediated by intercellular transport of spliceosomes has been demonstrated. Investigation of clinical samples from patients with ovarian cancer, as well as primary cultures of human glioblastoma cells, allowed us to observe that, upon induction of apoptosis, many tumor cells secrete into the extracellular environment various components of the spliceosome, a ribonucleoprotein complex that splices RNA molecules in eukaryotes. During the early stages of apoptosis the spliceosomes are transported from the nucleus to the cytoplasm, and then are secreted inside membrane vesicles (exosomes). These vesicles can be captured by neighboring tumor cells, and the splicing proteins contained therein affect mRNA splicing in the recipient cells. This leads to the formation of different protein isoforms and the acquisition of a more aggressive and treatment-resistant phenotype of surviving tumor cells. One of the key players of this process was identified as the RBM11 protein, which is readily transferred between glioblastoma cells and regulates alternative splicing of important oncogenes such as MDM4 and CyclinD1.