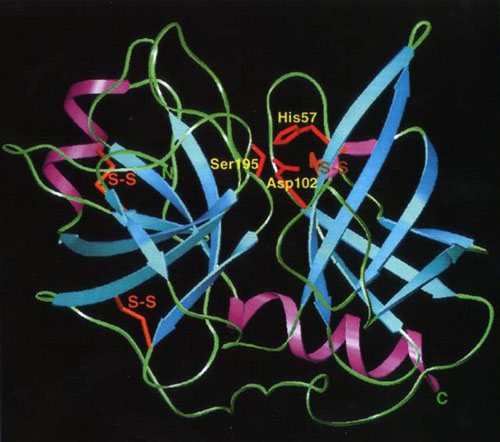 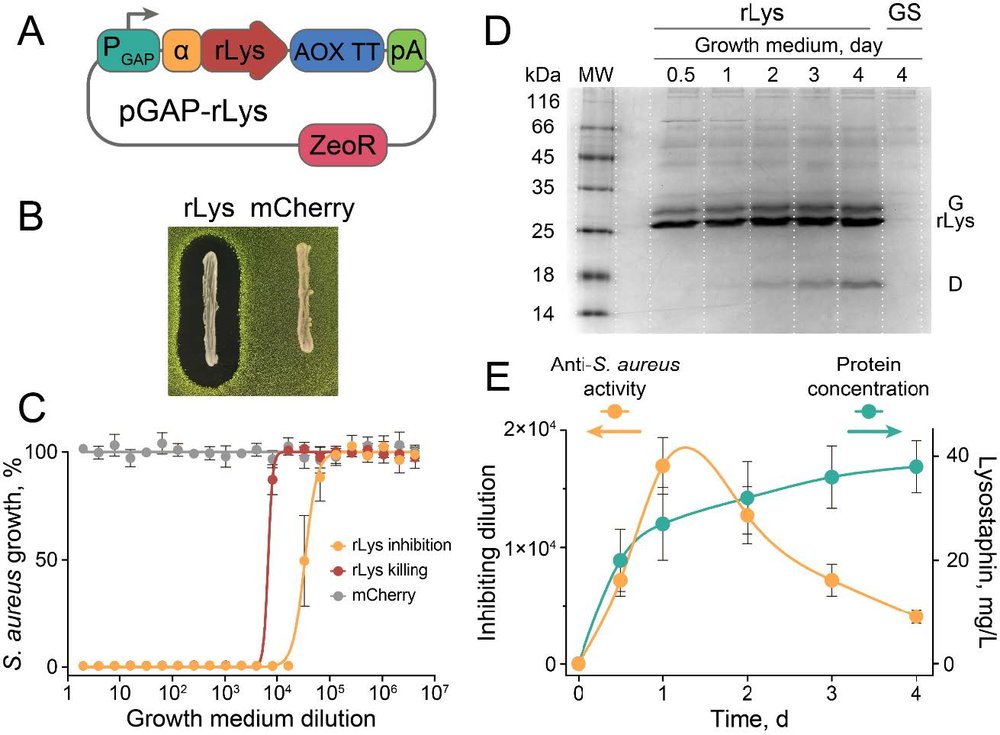 Staphylococcus aureus is a common human pathogen that is particularly often associated with antibiotic resistance. The eradication of this ubiquitous infectious agent from its ecological niches and contaminated surfaces is especially complicated by excessive biofilm formation and persisting cells, which evade the antibacterial activity of conventional antibiotics. Here, we present an alternative view of the problem of specific S. aureus eradication. The constitutive heterologous production of highly specific bacteriolytic protease lysostaphin in yeast Pichia pastoris provides an e_cient biocontrol agent, specifically killing S. aureus in coculture. A yeast-based anti-S. aureus probiotic was efficient in a high range of temperatures and target-to-effector ratios, indicating its robustness and versatility in eliminating S. aureus cells. The efficient eradication of S. aureus by live lysostaphin-producing P.pastoris was achieved at high scales, providing a simple, biocompatible, and cost-effective strategy for S. aureus lysis in bioproduction and surface decontamination. Future biomedical applications based on designer yeast biocontrol agents require evaluation in in vivo models. However, we believe that this strategy is very promising since it provides highly safe, effcient and selective genetically programmed probiotics and targeted biocontrol agents.

In collaboration with Laboratory of biocatalysis

Developed quantum mechanics/molecular mechanics (QM/MM) supercomputation is used to identify maturation of immuno¬globulin (Ig) reactivity through optimization of amino acids in the catalytic core, focused on enhanced nucleophilic attack on phosphorus. A computationally optimized variant, L-Leu47Lys, delivers 340-fold reactivity enhancement for paraoxon relative to wild-type Ig-paraoxonase resulting from substrate-induced ionization of the Tyr37 nucleophile. Variant antibody stereo¬selectivity toward a P-chiral phenylphosphonate toxin results from starkly contrasting solvent-assisted or general base cata¬lytic mechanisms relative to the parent Ig-paraoxonase. These mechanisms are defined by crystallographic and QM/MM anal¬yses as resulting from changed substrate orientation and par¬ticipating amino acid conformations within the catalytic site 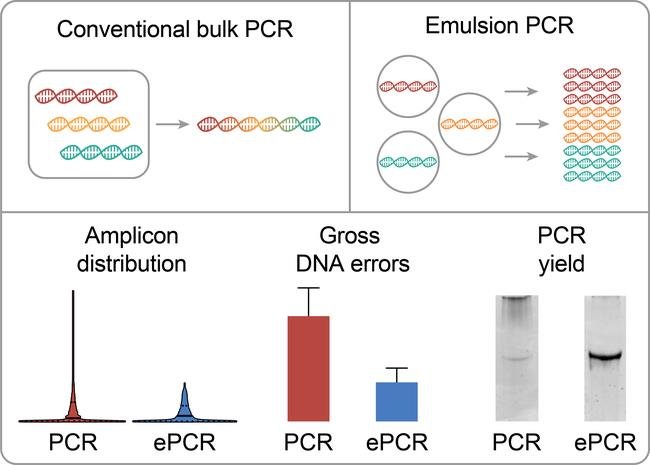 IBCh RAS together with their Russian and foreign colleagues showed that amplification of single DNA molecules encapsulated in a myriad of emulsion droplets (emulsion PCR, ePCR) allows the mitigation of this problem. Different ePCR regimes were experimentally analyzed to identify the most robust techniques for enhanced amplification of DNA libraries. A phenomenological mathematical model that forms an essential basis for optimal use of ePCR for library amplification was developed. A detailed description by high-throughput sequencing of amplified DNA-encoded libraries highlights the principal advantages of ePCR over bulk PCR. ePCR outperforms PCR, reduces gross DNA errors, and provides a more uniform distribution of the amplified sequences. The quasi single-molecule amplification achieved via ePCR represents the fundamental requirement in case of complex DNA templates being prone to diversity degeneration and provides a way to preserve the quality of DNA libraries.

Researchers from the Laboratory of biocatalysis, Laboratory of proteolytic enzyme chemistry, Laboratory of bioinformatics approaches in combinatorial chemistry and biology, Laboratory of hormonal regulation proteins IBCh RAS together with their Russian and foreign colleagues showed that amplification of single DNA molecules encapsulated in a myriad of emulsion droplets (emulsion PCR, ePCR) allows the mitigation of this problem. Different ePCR regimes were experimentally analyzed to identify the most robust techniques for enhanced amplification of DNA libraries. A phenomenological mathematical model that forms an essential basis for optimal use of ePCR for library amplification was developed. A detailed description by high-throughput sequencing of amplified DNA-encoded libraries highlights the principal advantages of ePCR over bulk PCR. ePCR outperforms PCR, reduces gross DNA errors, and provides a more uniform distribution of the amplified sequences. The quasi single-molecule amplification achieved via ePCR represents the fundamental requirement in case of complex DNA templates being prone to diversity degeneration and provides a way to preserve the quality of DNA libraries. 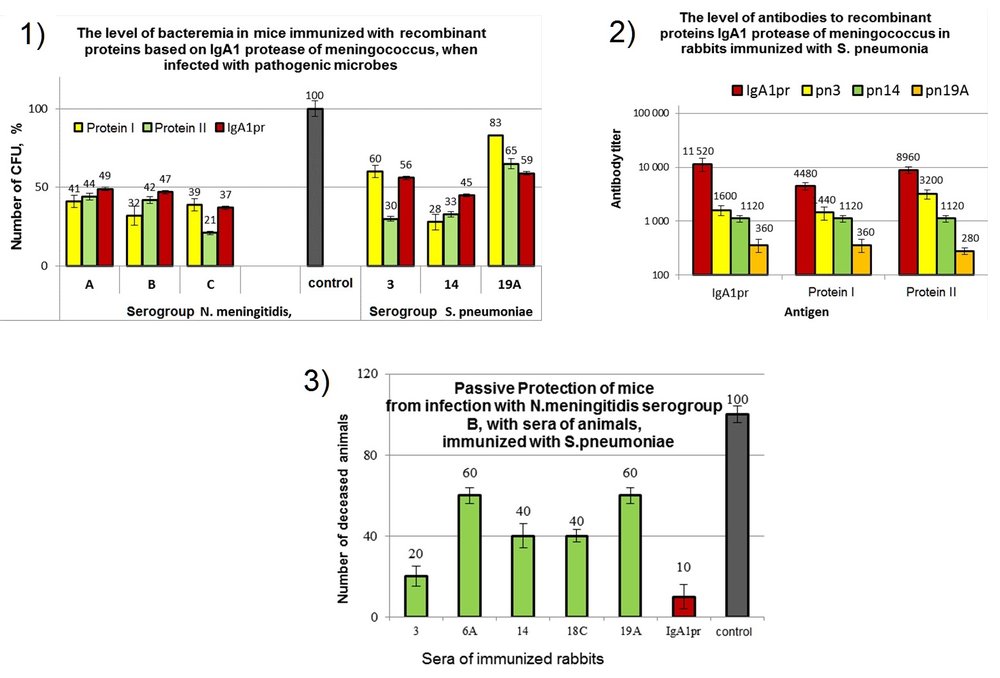 For the first time the ability of recombinant IgA1 protease N. meningitidis serogroup B and chimeric recombinant proteins created by us, consisting of two (I) or three  (II) interconnected fragments from different sites of the primary structure of the enzyme, to protect the animals immunized with fatal doses of meningococcal and some pneumococcal infections was shown. The decrease in the level of bacteremia (number of CFU, %) depended on the compound structure and the strain of the pathogen (Fig. 1).

For the first time in the sera of rabbits immunized with inactivated S. pneumonia microbial cells of different serotypes, antibodies to the N. meningitidis IgA1 protease and to the proteins I and II were detected (Fig.2). On the model of passive protection of animals, it was shown that the sera of these rabbits are able to protect animals from infection with N. meningitidis serogroup B, that indicates the possibility of cross immunity in pneumococcal and meningococcal infections (Fig.3).

The data obtained allow to conclude that a monocomponent polyvalent vaccine can be created based on the proteins of proteins I and II for the prevention of diseases caused by bacteria whose common virulence factor is the IgA1 protease: N. meningitidis, N. gonorrheoeae, H. influenzae, S. pneumoniae, S. sanguis, S. oralis, etc.

In the practice of world health, analogs of such a vaccine does not exist.