Laboratory of microfluidic technologies for biomedicine

The Laboratory of Microfluidic Technologies for Biomedicine is developing projects related to the use of microfluidic organ-on-a-chip models of various human organs, both in normal and pathological conditions, studying intercellular interactions, the pharmacokinetics and pharmacodynamics of various drugs and chemicals in preclinical experiments.

Laboratory staff conducted several studies using intestine-on-a-chip (absorption of drugs, dietary supplements, and toxins, secretion and uptake of microRNAs, the role of extracellular matrix and microcirculation in intestinal models, interaction with microbiome), placenta-on-a-chip (placental transport and toxicity of drugs, imitation of hypoxia in the placenta model, the role of miRNAs and extracellular matrix in intercellular interactions), liver-on-a-chip (metabolism and toxicity of different compounds), the blood-brain barrier-on-a-chip (studying the permeability of neurospheres coated with endothelium for various drugs, studying the effects of hypoxia in this model), tumor-on-a-chip/cancer-on-a-chip (growing tumors in a microfluidic device from primary patient cells, analysis of the sensitivity of tumors to drugs, the study of the processes of invasion and metastasis of tumor cells and penetration into target organs within the microfluidic chip), etc. Several studies have shown the role of various laminins as an extracellular matrix in the manifestation of cell and tumor properties, including morphological properties, proliferative, invasive and migratory activity, sensitivity to chemotherapy, etc.

The laboratory has a wide range of partners, both at the Institute and beyond. Together with other laboratories of the Institute, research is being carried out as part of the State task "Microfluidic technologies for the search of physiologically active metabolites, microbiotic agents, and the diagnosis of autoimmune and oncological diseases."

- Microfluidic technologies and organ-on-a-chip modeling for scientific and preclinical studies.
- Studying the role of toxins, including viscumin and ricin.
- The study of the role of microRNAs and their maturation system in the functioning of cells and intercellular interaction, the role of the miRNAs in the development of pathological conditions, as well as their utility as markers of diseases and predictors of various cell and tumor properties.
- Study of the role of the extracellular matrix, in particular various laminins, in determining the properties of tumor cells, including proliferation, invasion, migration, sensitivity to chemotherapy, etc. 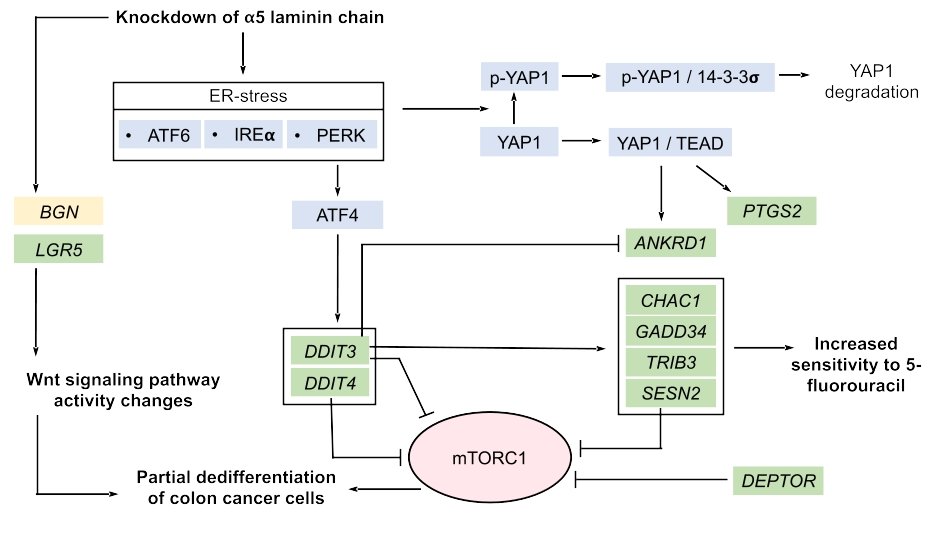 The interaction of tumor cells with the components of the extracellular matrix can effect on the rate of disease progression and metastasis. The most important components of this matrix are laminins, heterotrimeric glycoproteins consisting of one α-, one β- and one γ-chain (αβγ). Laminins are involved in the regulation of all the most important processes of living cell by interacting with receptors on the cell surface. In our work, we studied the effect of endogenous expression of the α5 laminin chain on colorectal cancer cells. Knockdown of the α5 chain has been shown to be associated with partial dedifferentiation of tumor cells, apparently by changing the activity of the Wnt signaling pathway and the mTORC1 complex. In addition, ER stress signaling pathways were activated in the cells, which contributed to an increase in the sensitivity of cells to 5-fluorouracil.

Figure: Scheme of the changes that occurred in colon cancer cells in response of the endogenous expression of the α5 laminin chain. Proteins for which there is a decrease or increase in the expression of their genes are highlighted in yellow and green, respectively.