The laboratory of Molecular Diagnostics was founded in 2015, on basis of Molecular Diagnostics group existing from 2005 in IBCh (before 2005 - group of phytoimmunodiagnostics). Principal work directions of the laboratory are development of the immunochemical test systems for plant pathogens (viruses, bacteria, fungi) detection, and fundamental research in the field of plant virology and molecular biology.

Basic research methods are genetic engineering and immunochemical methods and DNA technologies. Our studies are carried out in cooperation with some other IBCh labs, Belozersky Institute of Physico-Chemical Biology MSU, ZAO “DNA Technologies”, Institute of Phytopathology of the Russian Academy of Agricultural Sciences and a number of foreign institutes and companies.

The Laboratory was awarded with a lot of Russian grants as “Researching of ways and mechanisms of protein translocation through plasmodesma with the model of fitoviruses’ transport proteins” or EU grants “Researching of new and rentable methods for a noninvasive diagnostic of human pathogens microorganisms”.

...and many Russian talks. 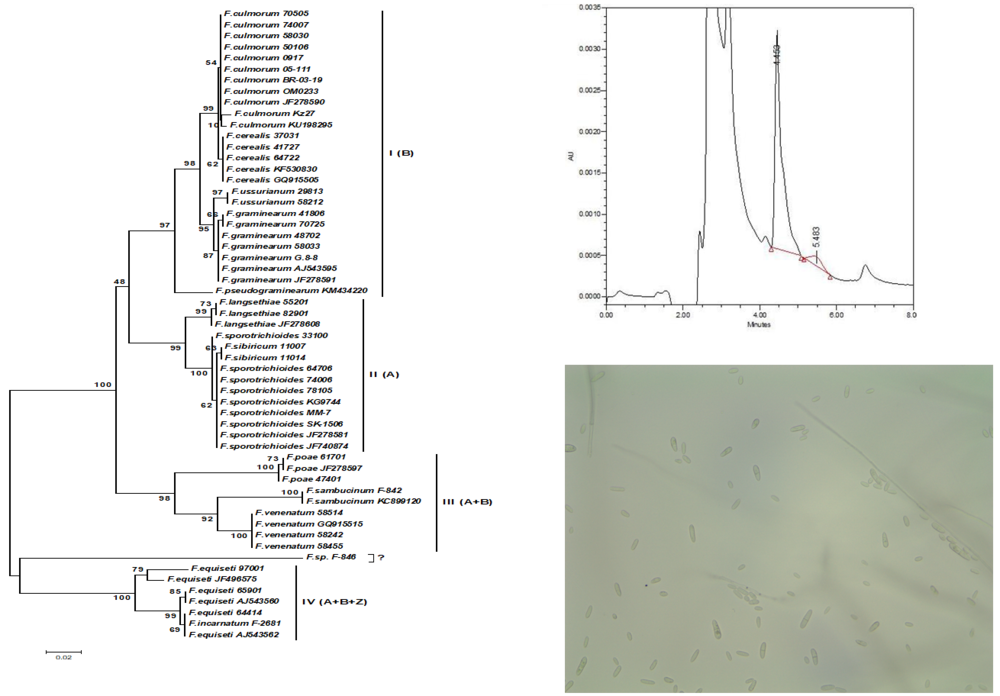 A comprehensive analysis of the taxonomic status and characteristics of a number of collection strains of fungi of the genus Fusarium was carried out. The use of multilocus phylogenetic analysis, morphological characteristics and the study of toxin formation allowed us to identify a number of cultures that are believed to be new, previously uncharacterized species. The most prominent example of such a strain is strain F-846, originally identified as F.poae. He formed a separate branch on phylogenetic trees constructed using sequences of 5 marker genes. A study using HPLC methods has demonstrated that strain F-846 is capable of synthesizing DON and its acetylated derivatives. Microscopic analysis confirmed that this strain appears to be a new species of the genus Fusarium.

In collaboration with Laboratory of ligand-receptor interactions,  Science-Educational center,  Laboratory of molecular toxinology 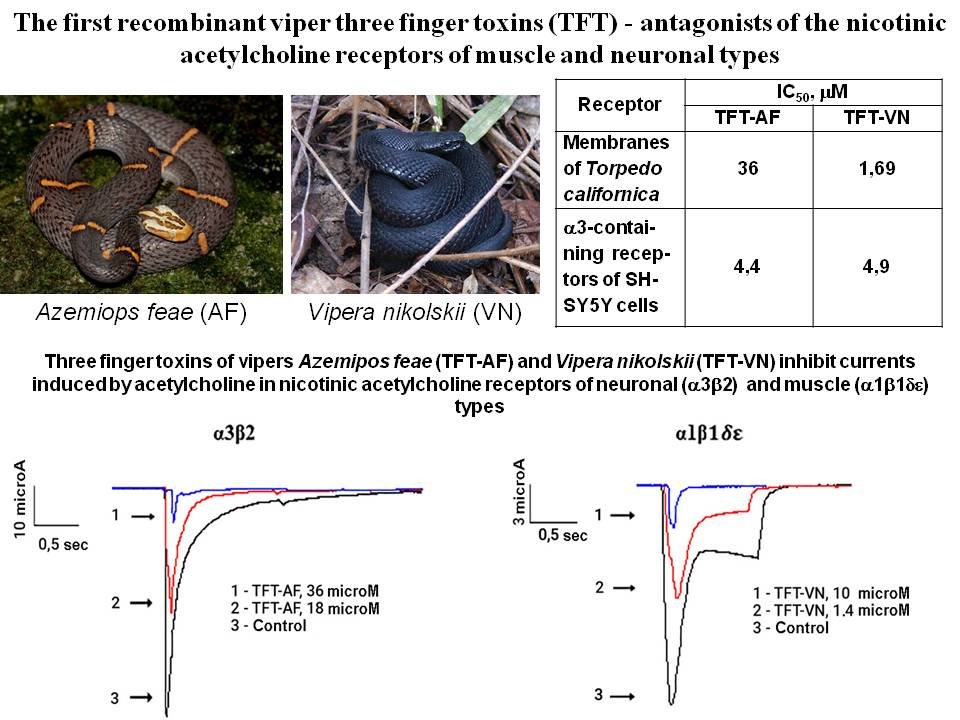 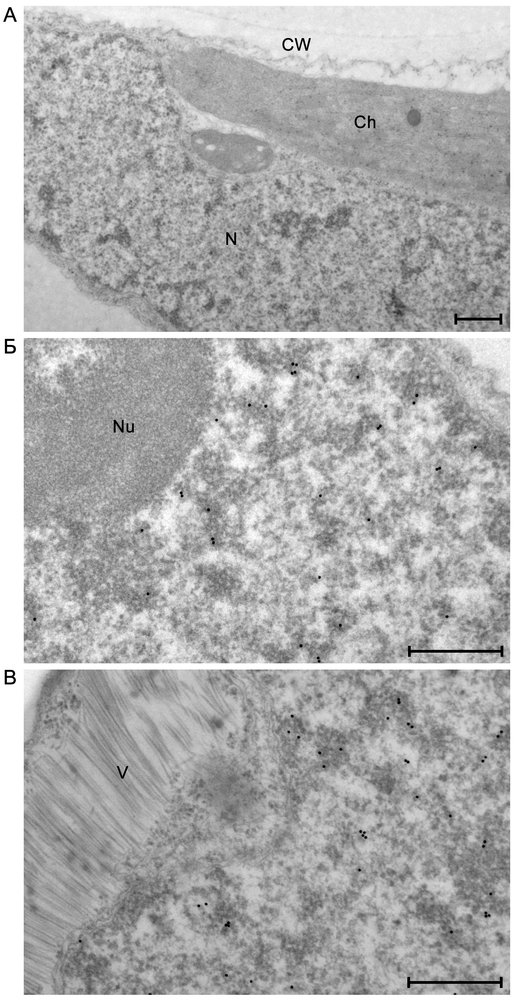 Previous studies have shown that genomes of some tobamoviruses contain not only genes coding for coat protein, movement protein, and the cistron coding for different domains of RNA-polymerase, but also a gene, named ORF6, coding for a poorly conserved small protein. In this study, using biochemical and immunological methods, we have shown that ORF6 peptide is accumulated after infection in case of two isolates of Tobacco mosaic virus strain U1 (TMV-U1 common and TMV-U1 isolate A15). Unlike virus particles accumulating in the cytoplasm, the product of the ORF6 gene is found mainly in nuclei, which correlates with previously published data about transient expression of ORF6 isolated from TMV-U1. Moreover, we present new data showing the presence of ORF6 genes in genomes of several tobamoviruses. 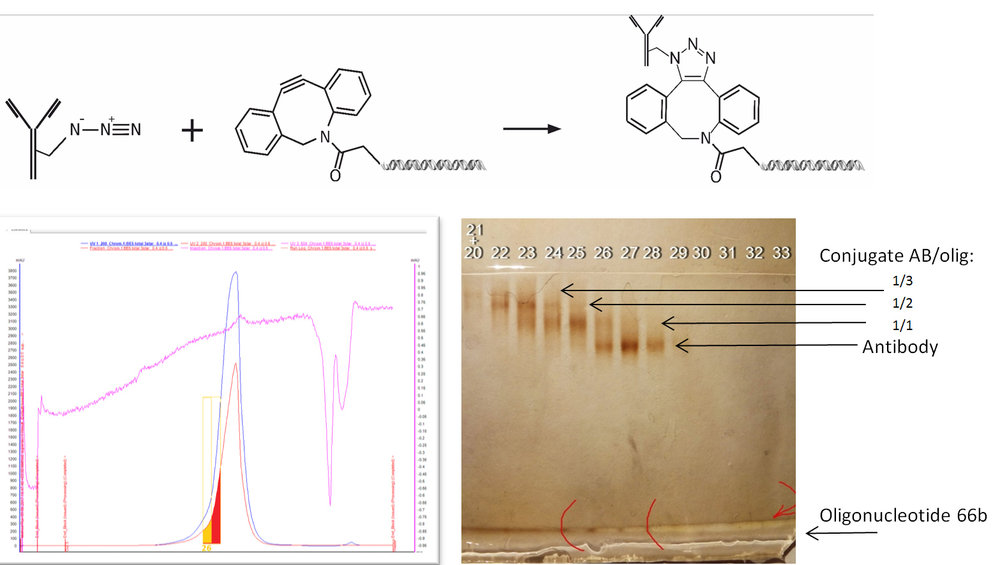 The conjugate of antibody and single-stranded oligonucleotide  was prepared using a bioorthogonal strain promoted azide-alkyne cycloaddition reaction. The antibody was modified by sulphotetrafluorophenyl ester of azidocaproic acid; N-hydroxysuccinimide ester of dibenzocyclooctin was used to modify the oligonucleotide with the amino group introduced during the synthesis. Conjugates are obtained with a degree of  labeling 1-3  of the oligonucleotide to the antibody.

Study of gene expression of trichothecene cluster genes in Fusarium graminearum and F. ussurianum under different culture conditions and their toxigenicity 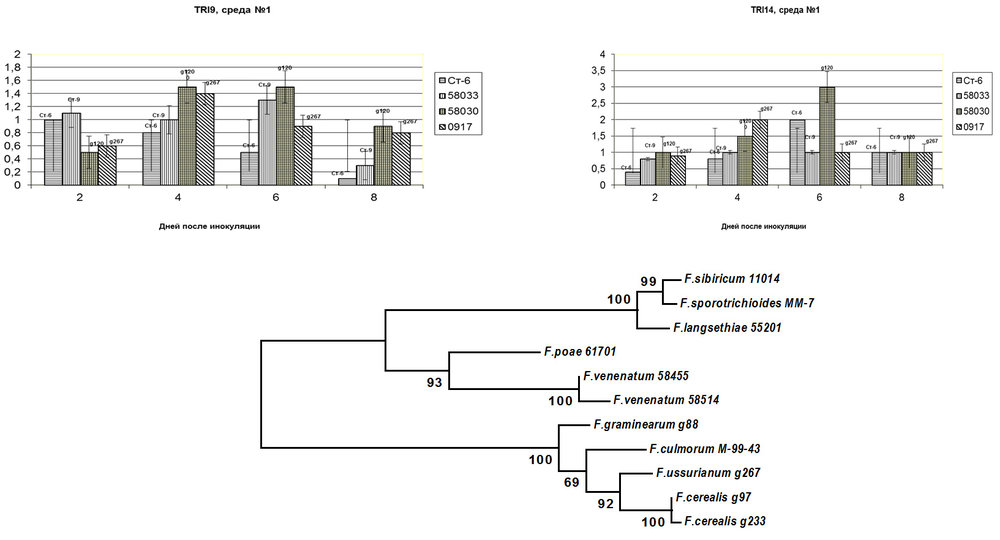 Expression dynamics of genes belonging to the trichothecene cluster which includes 12 genes, responsible for regulation and different steps of mycotoxin biosynthesis has been investigated. Strains of F. graminearum (St-6 and St-9) and F. ussurianum (g. 120 and g. 267) were selected for this study. 3 groups of genes with different levels and periods of expression were identified. A special attention was paid to genes TRI9 and TRI14, which functions are not known at the moment. The expression of these genes kept on the same level during all the cultivation process. Nucleotide sequences of these genes and predicted protein sequences for TRI14 gene of F. poae, F. sambucinum, F. langsethiae, F. venenatum, F. cerealis were determined for the first time. 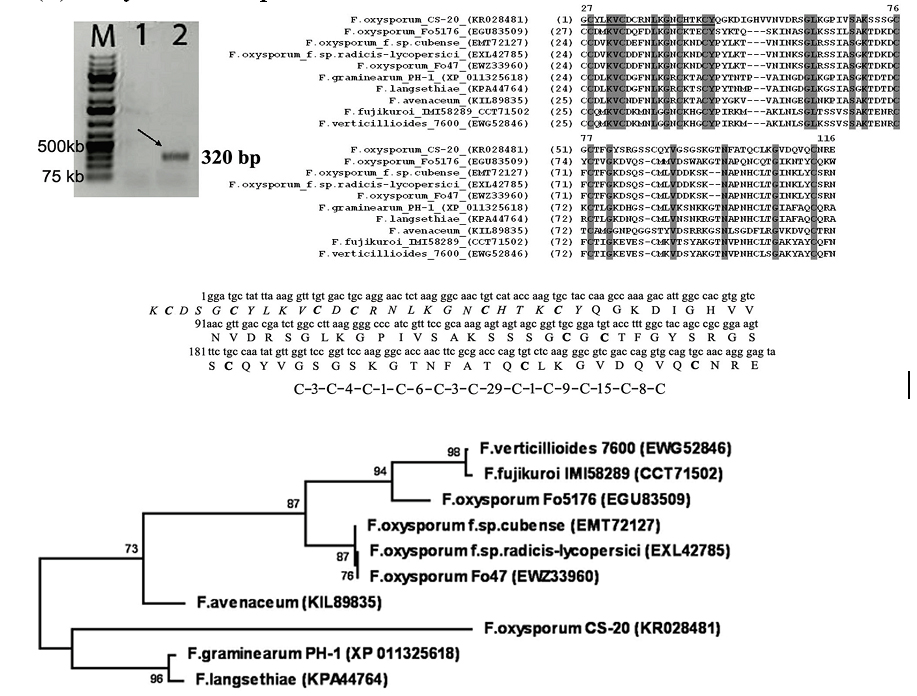 The structure of cDNA of a protein expressed by F. oxysporum strain CS-20 has been determined based on preliminary data of N-terminus sequence. The use of bioinformatics approach allowed to deduce the full amino-acid sequence of the protein. The calculated molecular mass corresponded well to the data obtained earlier by MALDI-TOF (10 kDa). It was demonstrated that the CS20EP possesses elicitor activity and stimulates tomato plants’ response to infection by virulent strain of F. oxysporum, causing vascular wilt and necrosis of plant tissue. Several structural differences between CS20EP and similar proteins from other Fusarium species have been shown. The nucleotide sequence of the gene encoding CS20EP protein has been deposited to the GenBank   (accession number KR028481).

The molecular genetics study of toxigenic Fusarium fungi diversity on the territory of Russia. Search of new high polymorphic markers in the fungi genome for their particular diagnostic and identification.

Partial sequences of frataxin and phosphate permease genes of major Fusarium pathogens common in Russia were first identified and presented in the international databases. As well, the phylogenetic potential of these loci was found.