The Laboratory is engaged in design and study of different recombinant proteins, first of all for medicine and biotechnology. In particular, researchers study toxins, antibodies, cytokines, membrane proteins (receptors, transporters, ion channels, etc.).

Ekaterina Lyukmanova’s group studies three-finger proteins of the Ly6 / uPAR family of human and snake origin. The main focus is on the molecular mechanisms of interaction between the studied proteins with their targets. The group owns advanced technologies of the recombinant production of the three-finger proteins that are not available from natural sources. It had allowed for the first time to investigate the spatial structure and perform a series of studies of functional human proteins such as Lynx1 (neuroplasticity regulation factor), as well as SLURP-1 and SLURP-2 (auto/paracrine regulators of epithelial cells). In the future these proteins may be used as a prototype for drugs that enhance cognitive function, anticancer drugs, and drugs aimed at the treatment of several skin diseases. Today the group actively studies other little-known three-finger proteins Lypd6 and Lypd6. Moreover the group collaborates with the group of the Structural Biology of Ion Channels of the IBCh RAS headed by Zakhar Shenkarev to study of voltage-gated ion channels.

Teymur Aliyev’s group is engaged in the design and improvement (humanization, affinity increase) of recombinant monoclonal antibodies, development of methods for the expression of recombinant antibodies in mammalian cells. Such antibodies may be used for the therapy and diagnosis of autoimmune, infectious and oncological diseases.

The Laboratory produces IgA antibodies against influenza A virus in an attempt to create a universal prophylactic drug against all subtypes of virus. Moreover, researchers produce unique antibodies to create instruments for the prevention and treatment at the early stages of Ebola disease.

Apart from it, the Laboratory creates artificial binding proteins with antibody functions. For the selection of such proteins derived from 10th human fibronectin domain, the cell surface display systems are being constructed. In particular, for these purposes the outer membrane protein of the microorganism isolated from permafrost – autotransporter from Psychrobacter cryohalolentis was expressed and characterized. Another interesting object is a proteorhodopsin from Exiguobacterium sibiricum, discovered and studied by researchers of the Laboratory. In collaboration with the Institute of Structural Biology (Grenoble, France), they determined the spatial structure of the protein.

Another group led by Marine Gasparian developed and received a unique receptor – a selective mutant variant of the antitumor cytokine TRAIL (tumour-necrosis-factor-related apoptosis-inducing ligand) – DR5-B. DR5-B kills tumor cells significantly more efficiently than wildtype TRAIL as alone as in combination with chemotherapy. DR5-B drug shows no toxicity in preclinical studies, and therefore it can be regarded as an effective way for the treatment of tumor diseases of various origins.

The Rita Chertkova’s group studies the functional activities of the electron transfer protein – cytochrome c from the different organisms. Using mutagenesis, the amino acid residues which are responsible for the activity of this protein in apoptosis were revealed, as well as residues responsible for transfer of electrons to the respiratory chain. The studies of mechanisms of inter- and intramolecular electron transfer from cytochrome, which results can be used to produce electronic devices with the protein molecules in a monolayer on the conductive surfaces.

Over the years the Laboratory creates and studies artificial proteins based albebetin, the first de novo protein created by a given structure. As a result albebetin variants were produced, which have antiviral, antiproliferative and insulin-like activity. Furthermore, albebetin and biologically active forms were used as a model protein to study amyloid fibril formation patterns underlying Alzheimer's disease.

The Laboratory of Protein Engineering was established in 2002 as an independent research structural unit of the Institute of Bioorganic Chemistry on the basis of the laboratory of Gene Chemistry and the Protein Engineering group of the laboratory of Spectral Analysis. The Laboratory was founded by Academician Mikhail Petrovich Kirpichnikov, who is now the Dean of the Faculty of Biology in the Lomonosov Moscow State University and the Head of the Department of Bioengineering of the Institute of Bioorganic Chemistry. For pioneering work on the design of artificial proteins with a given structure and biological activity, initiating the development of molecular bioengineering in our country, M.P. Kirpichnikov and D.A. Dolgikh were awarded the State Prize of the Russian Federation in the field of Science and Technology for 1999 (together with O.B. Ptitsin and A.V. Finkelstein of the Institute of Protein Research RAS).

Now the Laboratory directed by Professor Dmitry Dolgikh. He specializes in structural and functional studies, design and bioengineering of proteins. Under his leadership, the Laboratory carried out fundamental studies of the structure and function of a number of proteins that are of primary scientific and practical interest, including cytokines, bioactive artificial proteins, neurotoxins, cytochrome c, ion channels, antibodies.

The main achievements of the Laboratory of Protein Engineering since its inception include the following works:

- Was created a unique high-yield expression systems to produce snake neurotoxins for structural and functional studies, and proposed models of the interaction of some neurotoxins with their receptors.

- A new cold-active esterase from Gram-negative bacteria Psychrobacter cryohalolentis, isolated from permafrost, was produced and characterized. Its spatial structure and functional properties were studied.

- A unique retinal protein from Exiguobacterium sibiricum which conducts a transmembrane proton transfer, was expressed and characterized. We have identified the main stages of this process, determined its spatial structure and showed that its proton-acceptor site includes residues His57 and Asp85, and a proton donor for the Schiff base is a lysine residue.

- Recombinant analogues of neuromodulators Lynx1 and SLURPs – unique proteins regulating the nicotinic acetylcholine receptor were produced, and their physical-chemical and functional properties were studied.

Abstract: A sample-type protein monolayer, that can be a stepping stone to practical devices, can behave as an electrically driven switch. This feat is achieved using a redox protein, cytochrome C (CytC), with its heme shielded from direct contact with the solid-state electrodes. Ab initio DFT calculations, carried out on the CytC–Au structure, show that the coupling of the heme, the origin of the protein frontier orbitals, to the electrodes is sufficiently weak to prevent Fermi level pinning. Thus, external bias can bring these orbitals in and out of resonance with the electrode. Using a cytochrome C mutant for direct S–Au bonding, approximately 80% of the Au–CytC–Au junctions show at greater than 0.5 V bias a clear conductance peak, consistent with resonant tunneling. The on–off change persists up to room temperature, demonstrating reversible, bias-controlled switching of a protein ensemble, which, with its built-in redundancy, provides a realistic path to protein-based bioelectronics.

A retinal protein from Exiguobacterium sibiricum (ESR) is a light-dependent proton pump which possesses a unique structural feature – a lysine residue at a site for the internal proton donor for the Schiff base. For the first time, ESR derivatives with synthetic retinal analogs were produced and studied. With the use of direct electrometric approach, the kinetics of light-induced transmembrane electrical potential difference generation in proteoliposomes reconstituted with ESR and its mutant variant K96A were examined. We have demonstrated that at neutral and alkaline pH wt ESR produces positive photoelectric response corresponding to the transfer of a proton to the medium. Mutation of K96 results in the lack of millisecond electrogenic phase related to the Schiff base reprotonation. As a result, we have shown that reduced efficiency of proton transport in K96A is explained not only by slowing of the photocycle but also by increased probability of back reactions.

In collaboration with Biological Faculty MSU, IBCP RAS and MIPT 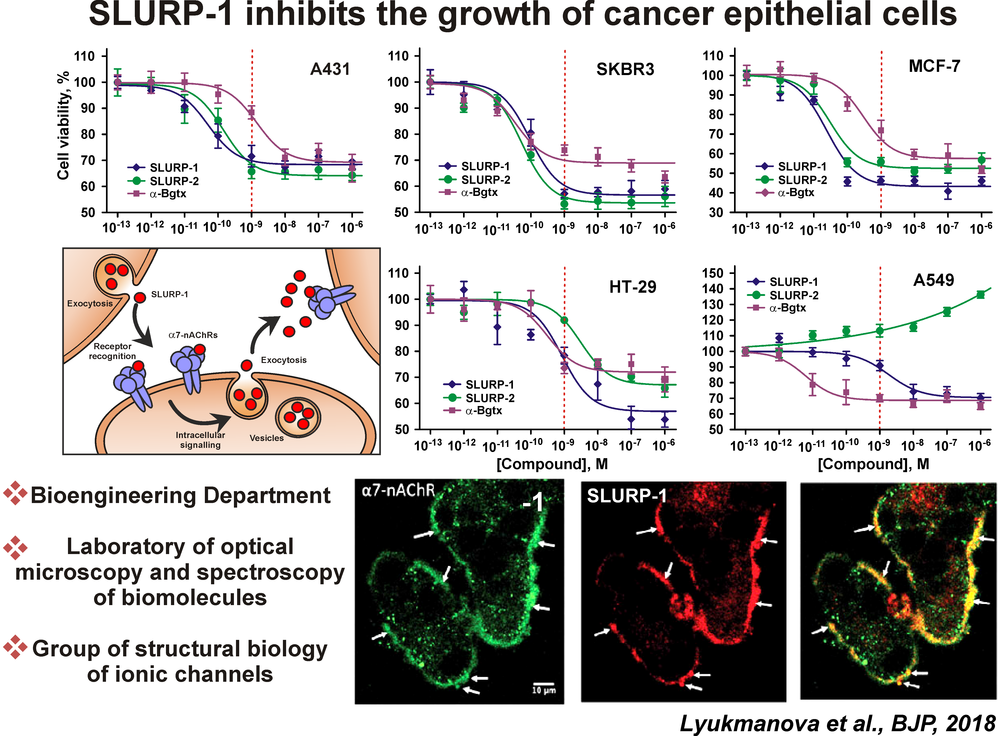 The human secreted protein SLURP-1, which is expressed in epithelial cells and controls their proliferation and migration, has been found to inhibit the growth of epithelial cancer cells.

The effect of SLURP-1 on cancer cells is characterized by a positive feedback: exogenous (recombinant) SLURP-1 binds to α7 nicotinic acetylcholine receptors on the cell membrane and triggers a cascade of signals that activates secretion of endogenous SLURP-1 from intracellular depot, quickly increasing its concentration in the intercellular space and enhancing antiproliferative action. 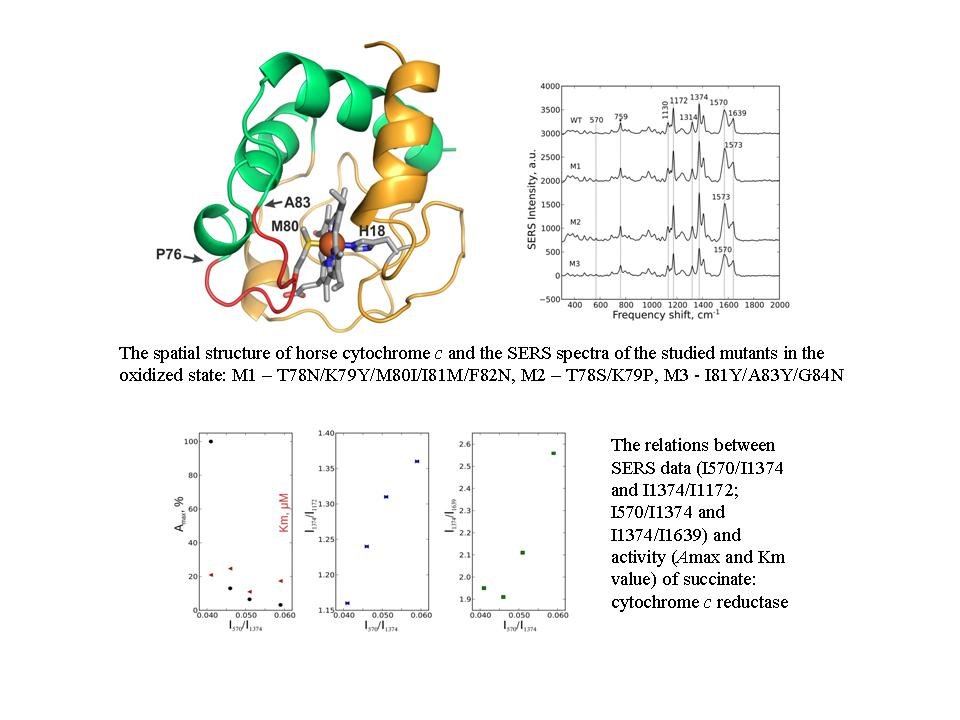 A preclinical study of the mutant variant of the antitumor cytokine TRAIL, which has a higher selectivity for the death receptor DR5, has been done. Variant DR5-B differs from the wild-type TRAIL by six substitutions of amino acid residues; it binds to the apoptosis conductive signal receptor DR5 as efficiently as the wild-type protein, but its affinity to apoptosis inhibitory decoy receptors DcR1 and DcR2 is significantly lower in comparison to TRAIL. Our experiments in cell cultures demonstrated that DR5-B kills tumor cells of different origin (either alone or in combination with chemotherapy) 2-10 times more effectively than wild-type TRAIL, which has recently passed clinical trials in the United States and has shown very limited therapeutic effect. Our results suggest that the mutant version of TRAIL (DR5-B) is not toxic and can be apply for an effective treatment of different types of cancer in which there is increased expression of DR5 receptor. (In collaboration with the Laboratory of prototyping and testing of biotechnological development of the Biological Faculty of Moscow State University).