The Laboratory is involved in study of three dimensional (3D) structure of the protein-peptide nature compounds by high resolution X-ray methods supported by molecular mechanics/dynamics/graphics and bioinformatics methods. The Laboratory studies proteins of different functional nature with emphasis on the structure-functional aspects of specificity of the ligand/substrate recognition and binding.

The Laboratory collaborates with the Macromolecular Crystallography Laboratory of the National Cancer Institute of USA (Argonne, IL, USA). The laboratory of X-ray study was organized in 1990 from the X-ray group functioning since 1972. 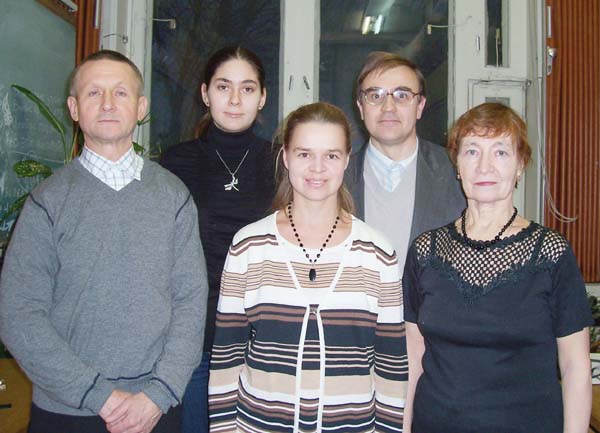 In the present time, much attention in our lab is paid to structural study of the fluorescent proteins (FP) used as molecular bionanomarkers in cell biology, biotechnology and biomedicine for visualization and monitoring the internal processes within cells or whole organisms. A big series of FPs, emitting in green, yellow, red and far red spectral regions, has been studied in our Lab by high resolution X-ray methods. The following analysis of the structure-functional relation allowed to explain many experimentally observed properties and to design new mutant fluorescent variants with improved photophysical characteristics. The obtained results of the Laboratory are expanding considerably the structural base for rational design of the advanced fluorescent biomarkers for practical application.

The 3D structures of the cyclic depsipeptide ionophores differing by cycle size, nature and configuration of residues helped to understand the important details of the metal ion binding specificity and mechanism of the ion transport through biological membranes.

In collaboration with Hauptman-Woodward Medical Research Institute (Buffalo, USA) a number of research projects has been performed under the title “Rational proteomics of short chain dehydrogenases”. A general approach for identification of the 3D pattern of residues (fingerprints) responsible for the protein fold, cofactor and substrate binding was developed for this family.

A big series of FPs, emitting in green, yellow, red and far red spectral regions, has been studied in our lab by high resolution X-ray methods. The following analysis of the structure-functional relation allowed to explain many experimentally observed properties and to design new mutant fluorescent variants with improved photophysical characteristics.

Selected species of the marine button polyps — the source of fluorescent proteins (FP) (a); The principal structural fold of FPs is an 11-stranded β-barrel and a chromophore (matured from the three residue sequence) embedded in the middle of an internal α-helix going along the β-barrel axis (b).

Crystals of the fluorescent proteins for X-ray study

Unic examples of fluorescent proteins obtained in the laboratory

I. Study of the far red monomeric FP mKate has showed that the observed pH dependence of fluorescence is a consequence of cis-trans isomerization of the internal chromophore. Based on its 3D structure the new gene engineered variant mKate_S158A with almost 2 fold brighter fluorescence has been rationally designed. Currently, the photophysical characteristics of this variant succeed significantly over those of other known monomeric fluorescent biomarkers.

Structural study of the highly toxic red and orange FPs, KillerRed and KillerOrange, allowed to determine the chromophore adjacent key amino-acid residues participating in generation of the active oxygen forms, responsible for the phototoxic effect. 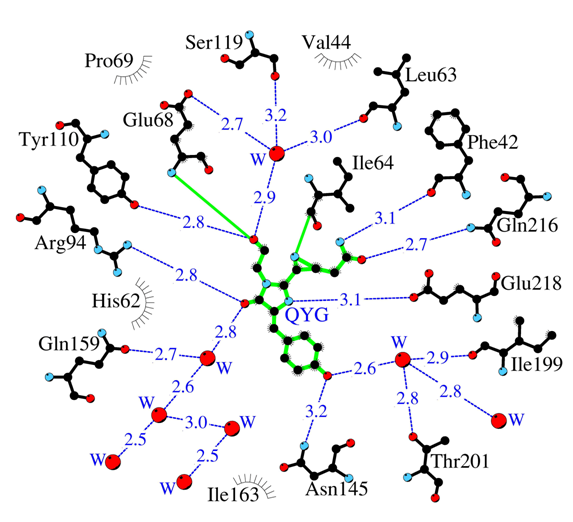 II. The intermediate form of chromophore biosynthesis has been observed in crystal structure of the colorless nonfluorescent FP, aceGFP-G222E. This new experimentally observed structure of the immature chromophore, characterized by the non-coplanar arrangement of the imidazolinone and phenolic rings, where cyclization of the protein backbone has occurred, but Tyr66 chromophore still stays in the native, non-oxidized form, with Cα and Cβ atoms in sp3 hybridization. 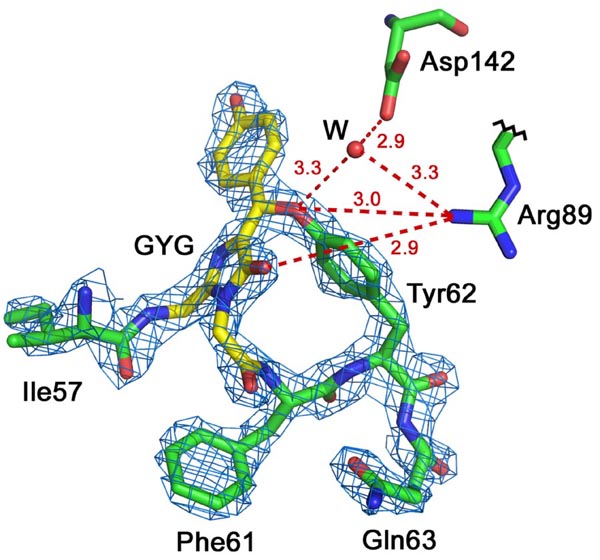 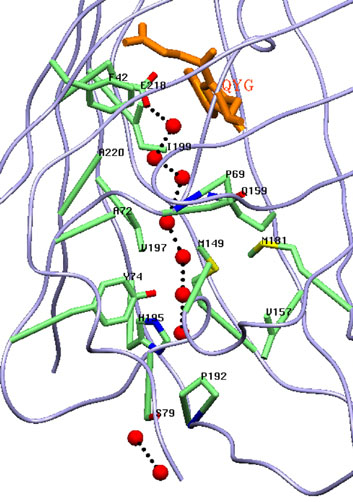 V. For the first time, the three-dimensional structure of the native green and UV irradiated photoconverted red forms of DendFP (Dendronephthya sp.) has been determined,  the latter showing cleavage of the main chain before chromophore

Chromophore structure (His62-Trp63-Gly64) in the green form of DendGFP (a) and the red form of DendRFP (b).

VI. In international collaboration three new bright far-red and near infrared genetically engineered biomarkers (from plant photoreceptors - phytochromes), providing high permeability of emission through biological tissues - miRFP670 (em ~ 670nm ), miRFP703 (703 nm) and miRFP709 (709 nm), have been studied by X-ray method with resolution 1.33, 1.35 and 1.34Å, respectively. Three-dimensional structure and structure-functional relations of these biomarkers have been established 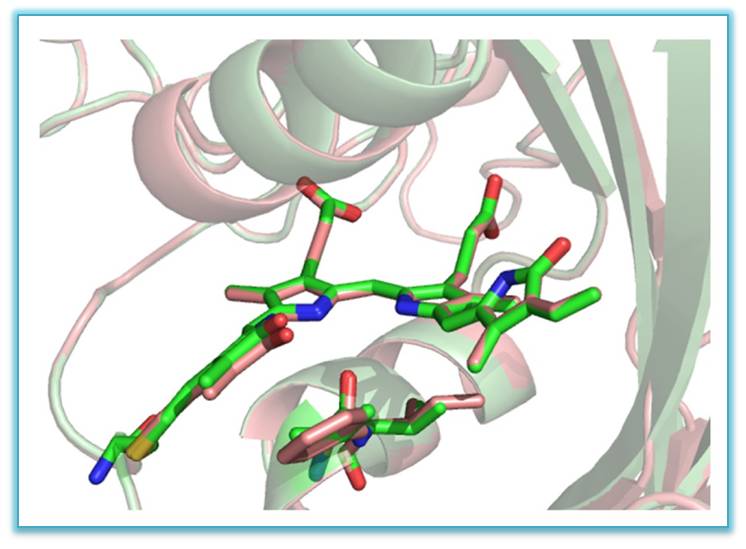 Fluorescent biomarker with Ala residue in the third position of the chromophore-forming triad. X-ray study. 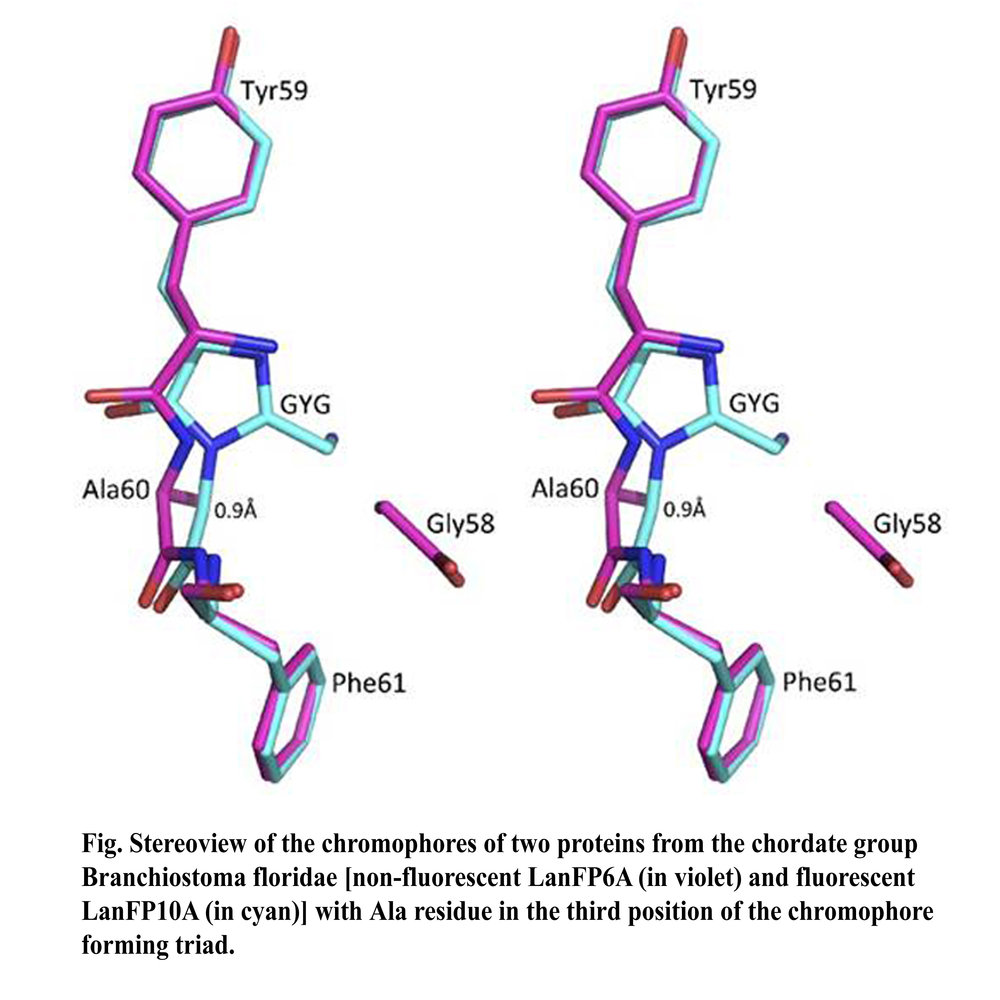 The three-dimensional structure and structure-functional relation of four fluorescent proteins, LanFP6G, LanFP6A, LanFP10G and LanFP10A, from the poorly studied chordate group (Branchiostoma floridae) were determined with a resolution 1.20, 1.35, 1.30 and 1.81Å, respectively. We determined the first structure of the GFP-like fluorescent protein, LanFP10A, having matured chromophore with Ala residue in the third position instead of the strictly conserved Gly.

In collaboration with Laboratory of biomolecular modeling 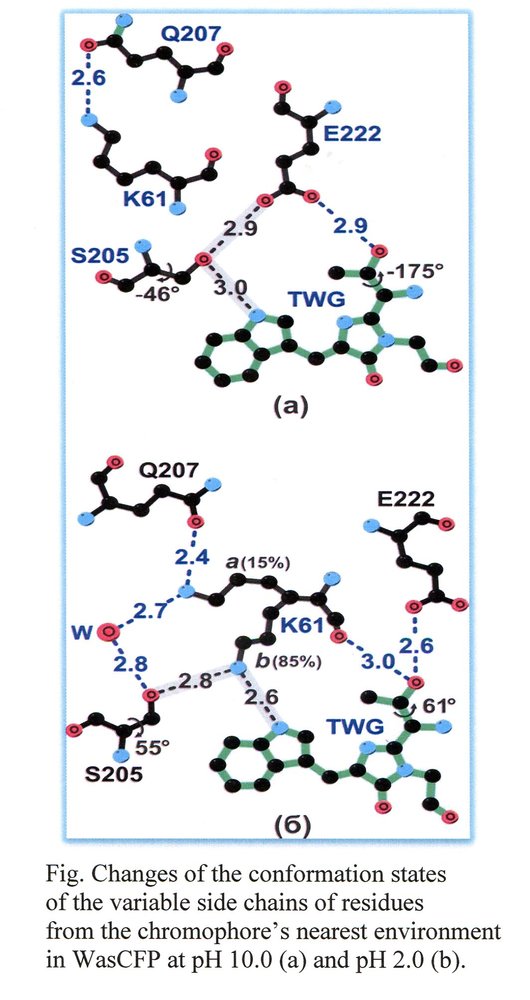 The three-dimensional structure of the pH dependent green fluorescent protein of WasCFP with the Trp based chromophore has been determined by X-ray method (resolution 1.3Å) at extremely low value of pH 2.0 (earlier, we determined the crystal structures of WasCFP at pH 10.0, 8.0 и 5.5). It was shown, that stepwise shift of pH from 10.0 to 2.0 is accompanied by the synchronous change of side chain conformations of residues from the chromophore nearest environment. Role of interactions of the chromophore with the key amino-acid residues from nearest environment has been studied by quantum chemistry calculations. 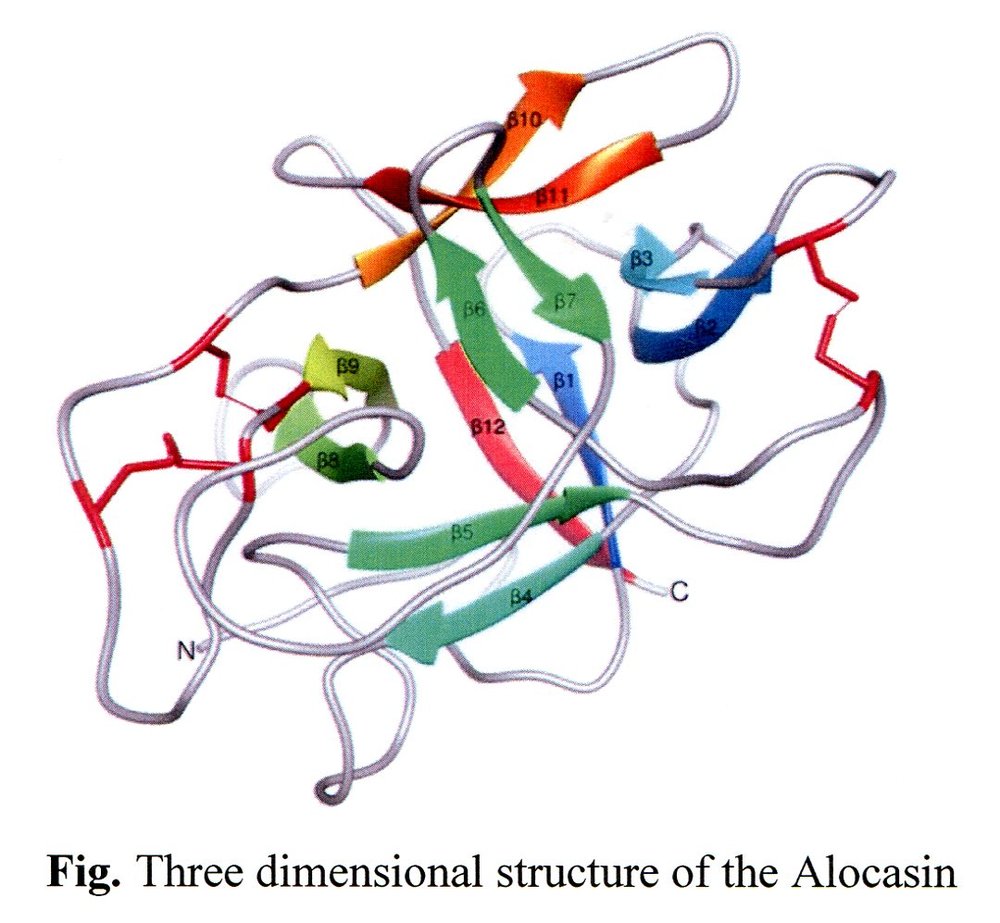 Three dimensional structure of the β-structural protein Alocasin from the rhizomes Alocasia has been determined by X-ray method at 2.5 Å resolution. Alocasin demonstrates the profound inhibitory activity towards trypsin and chymotrypsin and to midgut proteases of the mosquitos (Aedes aegypti) and presents a promising tool for the anti Ae. aegypti activity.

Three new bright far-red and near infrared genetically engineered biomarkers (from plant photoreceptors - phytochromes), providing high permeability of emission through biological tissues - miRFP670 (lem ~ 670nm ), miRFP703 (703 nm) and miRFP709 (709 nm), have been studied by X-ray method with resolution 1.33, 1.35 and 1.34Å, respectively. Three-dimensional structure and structure-functional relations of these biomarkers have been established 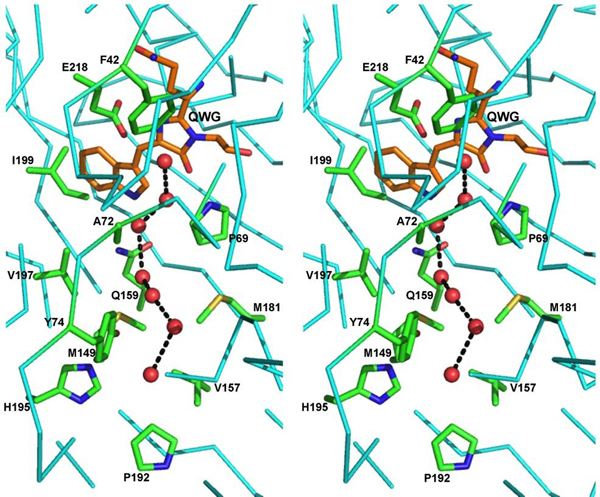 Three dimensional structure of two new phototoxic orange fluorescent proteins, dimeric KillerOrange and monomeric m KillerOrange, have been determined by X-ray method at resolution 1.81Å and 1.57 Å, respectively. They are first orange-emitting protein photosensitizers with a tryptophan-based chromophore (Gln65-Trp66-Gly67). The β-barrel structure of both orange photosensitizers has an internal channel extending along the β-barrel axis. It is filled with a chain of hydrogen-bonded water molecules providing an outlet for the photo-generated reactive oxygen spices. Trp66 of the chromophore in KillerOrange/mKillerOrange adopts an unusual high energy trans-cis conformation stabilized by H-bond with the nearby Gln159. The observed trans-cis isomer of Trp66 presents first example among those found in known Trp-based chromophores. This conformation was suggested a key structural feature for generation of bright orange emission and phototoxicity.