We invite everyone interested in all areas of molecular neurobiology. 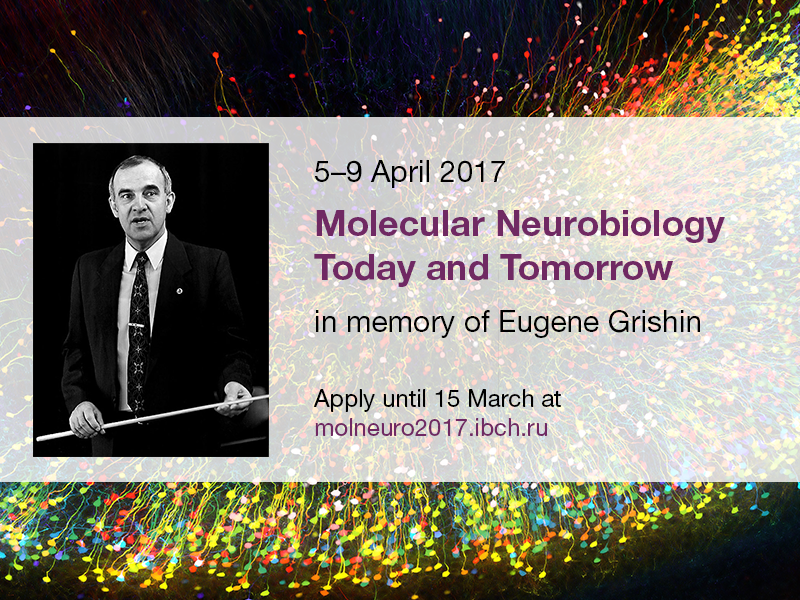 The German-Russian symposium "Molecular Neurobiology Today and Tomorrow" will take place from 5 to 9 April 2017 at the Shemyakin-Ovchinnikov Institute of Bioorganic Chemistry, Moscow, Russia.

This year symposium is held in memory of Prof. Eugene V. Grishin (1946-2016), a leading scientist in the field of molecular neurobiology, member of the Russian Academy of Sciences and Deputy Director of the Shemyakin-Ovchinnikov Institute of Bioorganic Chemistry. This will be the fourth event in the series; regular bilateral German-Russian symposia on neurosciences were initiated by Professor E. Grishin and Professor F. Hucho (Free University of Berlin). Symposia are held every two years, alternately in Russia and Germany. Traditionally, participants of the event are the leading scientists of the two countries, specializing in the field of neurobiology and neurochemistry.

The major theme of the upcoming symposium is molecular neurobiology, an area to which Eugene Grishin devoted his scientific career. Specific fundamental scientific problems, which will be given special attention, are the most pressing challenges to the scientific community: pathogenesis of neurodegenerative diseases, development and plasticity of the central nervous system, brain genomics, transcriptomics and metabolomics, molecular basis of pain perception, structure and function of neuroreceptors and ion channels, mechanism of action of natural toxins and their use as tools in molecular neurobiology.

Selected young participants of the meeting will be able to make oral presentations and present their research in a special poster session. In addition, Eugene Grishin's colleagues and students working in other countries (Belgium, Great Britain, Ukraine, and USA) will take part in the event.