Neurotrophins and their receptors regulate the differentiation, survival, and growth of nerve cells. Despite their central role in the life of neurons, the mechanisms underlying signal transmission into the cell are still not fully understood. According to one of the main hypotheses, after ligand binding the dimer of a Trk neurotrophin receptor undergoes a series of rearrangements that trigger signaling cascades inside the cell. However, structural data supporting this idea have not yet been available. Researchers from the Laboratory of Biomolecular NMR Spectroscopy of the Institute of Bioorganic Chemistry, Russian Academy of Sciences, and the Institute of Biomedicine in Valencia have discovered two states of the transmembrane domain, which, apparently, are responsible for the active and inactive states of the receptor. In addition, it turned out that the extracellular juxtamembrane region is intrinsically disordered. The obtained data suggested that signal transduction is possible if the ligand binds directly to this receptor site, thereby stabilizing it. The work was published in iScience. Screening of the promising direct thrombin inhibitors from haematophagous organisms. Part I: Recombinant analogues and their antithrombotic activity in vitro

This is a collaborative work of researchers from the Laboratory of Biopharmaceutical Technologies of the IBCh RAS and Biological Testing Laboratory of the BIBCh RAS. Its goal is the development and testing of new anticoagulants from haematophagous organisms. Haemadin from the leech Haemadipsa sylvestris, variegin from the tick Amblyomma variegatum, and anophelin from Anopheles albimanus were chosen as the most promising anticoagulants. We have developed a method for the biotechnological production of these recombinant peptides with pharmaceutical purity. As a reference standard, we have used the recombinant hirudin-1 from Hirudo medicinalis (desirudin), which is the active substance of the FDA-approved drug Iprivask (Aventis Pharmaceuticals, USA). The anticoagulant activities of these peptides were compared using the thrombin amidolytic activity assay and detection of the prolongation of coagulation time (thrombin time, prothrombin time, and activated partial thromboplastin time) in mouse and human plasma. The article was published in the journal Biomedicines (IF 6.081). 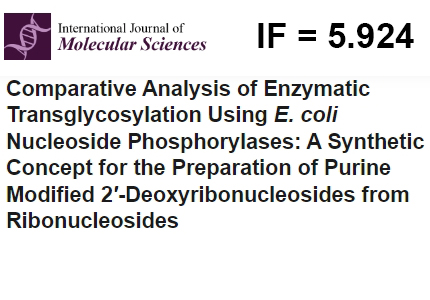 The team of scientists from the Laboratory of Biopharmaceutical Technologies of the IBCh RAS and from the Engelhardt Institute of Molecular Biology (IMB RAS) has developed an efficient method for the preparative synthesis of modified purine 2'-deoxyribonucleosides. For this purpose, a comparative analysis of the conditions of the transglycosylation reaction catalyzed by purine (PNP) and thymidine (TP) nucleoside phosphorylases leading to the formation of 2'-deoxynucleosides, was carried out. It was shown that maximal yields of 2′-deoxyribonucleosides, especially modified, can be achieved under small excess of glycosyl-donor (7-methyl-2'-deoxyguanosine, thymidine) and a 4-fold lack of phosphate. A less than equimolar phosphate concentration allows using only a small excess of the nucleoside-donor of the carbohydrate residue to increase the yield of the reaction. The work was published in the International Journal of Molecular Sciences (IF 5.924). 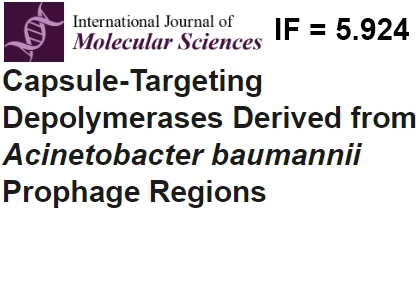 A team of scientists from the Laboratory of molecular bioengineering IBCh RAS together with the colleagues from other Russian Institutes bioinformatically predicted and recombinantly produced several different depolymerases encoded in the prophage regions of Acinetobacter baumannii genomes. For two depolymerases, the specificity to capsular polysaccharides (CPSs) of A. baumannii belonging to K1 and K92 capsular types (K types) was determined. The data obtained showed that the prophage-derived depolymerases were glycosidases that cleaved the A. baumannii CPSs by the hydrolytic mechanism to yield monomers and oligomers of the K units. The recombinant proteins with established enzymatic activity significantly reduced the mortality of Galleria mellonella larvae infected with A. baumannii of K1 and K92 capsular types. These enzymes can be considered as suitable candidates for the development of new antibacterials against corresponding A. baumannii K types. The study is published in the International Journal of Molecular Sciences. Learn more Sheath proteins comprise a part of the contractile molecular machinery present in bacteriophages with myoviral morphology, contractile injection systems, and the type VI secretion system (T6SS) found in many Gram-negative bacteria. A team of scientists from the Laboratory of molecular bioengineering IBCh RAS analysed 112 contractile phage tail sheath proteins (TShP) representing different groups of bacteriophages and archaeal viruses with myoviral morphology have been modelled with the novel machine learning software, AlphaFold 2. The common core domain of all studied sheath proteins, including viral and T6SS proteins, comprised both N-terminal and C-terminal parts, whereas the other parts consisted of one or several moderately conserved domains, presumably added during phage evolution. The results are published in the Viruses. Learn more