The team of the Department of metabolism and redox biology of ﻿Institute of Bioorganic Chemistry in collaboration with colleagues from the Federal Center of Brain Research and Neurotechnologies of the Federal Medical Biological Agency, Lomonosov Moscow State University and several other institutes have developed a technology that allows real time recording of intracellular metabolic processes in vivo. On the model of ischemic stroke in rodents, the new data were obtained on changes occurring in neurons during the development of pathology.

Ischemic stroke is one of the leading causes of death and disability in the world population. The pathophysiology of stroke is actively being investigated at various levels and models, but there are still serious gaps in our understanding of the metabolic changes accompanying this disease. The processes that occur in brain tissue at the earliest stages of ischemia and reperfusion are poorly studied. It is generally accepted that brain cells during ischemia and reperfusion generate reactive oxygen species (ROS), which cause oxidative stress and are one of the main damaging factors. However, due to the lack of suitable methods the generation of ROS during ischemia/reperfusion has never been demonstrated in vivo experiments so far, and the time parameters of these processes remain unknown.

The researchers from the ﻿Institute of Bioorganic Chemistry together with colleagues from the Federal Center of Brain Research and Neurotechnologies of the Federal Medical Biological Agency, Lomonosov Moscow State University and other Russian and foreign institutes have developed a technology to solve this problem. Using viral delivery, the genetically encoded fluorescent biosensors SypHer3s for imaging pH dynamics [1] and HyPer7 for detecting hydrogen peroxide (H2O2) [2], developed earlier at our Institute, were expressed in the brains of SHR rats. The ratiometric signal of the biosensors was recorded using a specially developed ﻿two-channel photometry system through optical fibers implanted in the brain. Ischemic stroke was caused by the middle cerebral artery occlusion (MCAO). 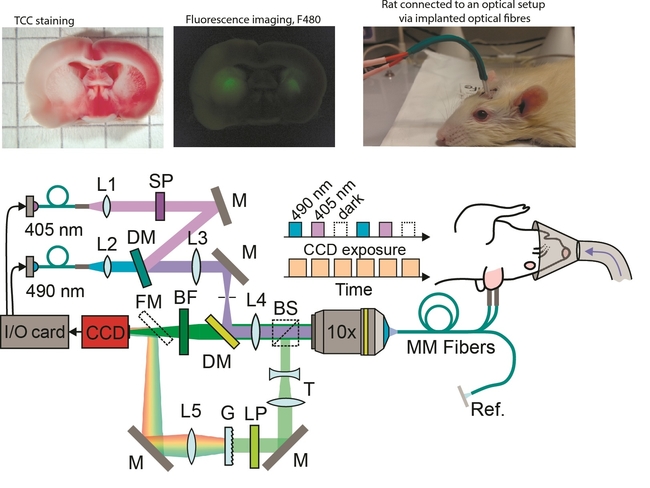 Scientists found that powerful acidosis in the ischemic brain tissue occurs from the first seconds of the development of pathology. Contrary to expectations, no significant formation of H2O2, one of the main representatives of cellular reactive oxygen species, was detected in the acute phase of ischemia/reperfusion. A significant increase in the concentration of H2O2 in the mitochondria of neurons in the damaged area was observed only on the next day.

Comparison of the results of in vivo experiments with in vitro studies on cultured neurons under conditions of hypoxia/reoxygenation demonstrated that the dynamics of redox processes in these models differ significantly. This confirms once again that cell culture is a poor predictive model of metabolic events occurring inside the organism.

The developed technology will be used for further studies of the metabolism of brain cells in normal and pathological conditions. The work was published in Redox Biology (IF 11,799).