The team from the Department of metabolism and redox biology together with Russian and foreign colleagues from Belgium and France, has developed a new analytical tool that allows registering (pseudo)hypohalous stress in living systems at subcellular resolution in real-time mode. The indicator was characterized in detail in vitro, and the spatial structure of a redox sensor based on a circularly permuted fluorescent protein was established for the first time. The resulting instrument was used to visualize the dynamics of active halogen species in the model of inflammation caused by the amputation of Danio rerio caudal fin. The work was published in Nature Communications journal (IF 14.919).

In recent years, experimental evidence has been collected, convincingly showing that many chronic human diseases are accompanied by an inflammatory component, characterized by the infiltration of activated neutrophils into the region of pathology. These cells possess specialized enzymatic systems for the production of (pseudo)hypohalous acids, small inorganic molecules with high reactivity, capable of covalently modifying most biological compounds. Normally, organisms use these substances to fight pathogens, however, in cases where their generation gets out of control, they initiate damage to the host tissues and organs. Until now, the research of (pseudo)hypohalous acids metabolism has been significantly complicated by the short lifetimes of the studied agents, which hindered their direct visualization. Traditional approaches based on the detection of hypohalous stress secondary products are not characterized by sufficient sensitivity and selectivity, and also cannot be applied to living organisms in real-time mode.

In their work, the team has developed a genetically encoded fluorescent sensor for imaging (pseudo)hypohalous acids by integrating the circular permutant of yellow fluorescent protein (cpYFP) into the transcriptional repressor NemR from E. coli. The resulting indicator selectively interacts with active species of (pseudo)halogens (HOCl, HOBr, HOSCN, halamines), which induces a shift in its optical properties. The response of the instrument is reversible, which makes it possible to visualize not only the dynamics of hypohalous stress but also the work of antioxidant systems to neutralize it. The biosensor was named Hypocrates.

Hypocrates became the first cpFP-based redox indicator for which the spatial structure has been deciphered. The obtained information sheds light on the conjugation mechanism of the key cysteine residue and the chromophore microenvironment, which in the future can be used for the rational improvement of not only the discussed sensor but also other chimeric proteins with a similar architecture.

Using the new instrument, the authors visualized the dynamics of hypohalous stress in living bacteria phagocytosed by primary culture of human neutrophils. The team also registered the production of (pseudo)hypohalous acids in the D. rerio tail fin amputation model. Previous works have shown that the HOCl-generating activity of neutrophils is required to eliminate hydrogen peroxide, which serves to attract leukocytes to the wound region. Thus, Hypocrates allowed for the first time to observe this process in real-time mode. 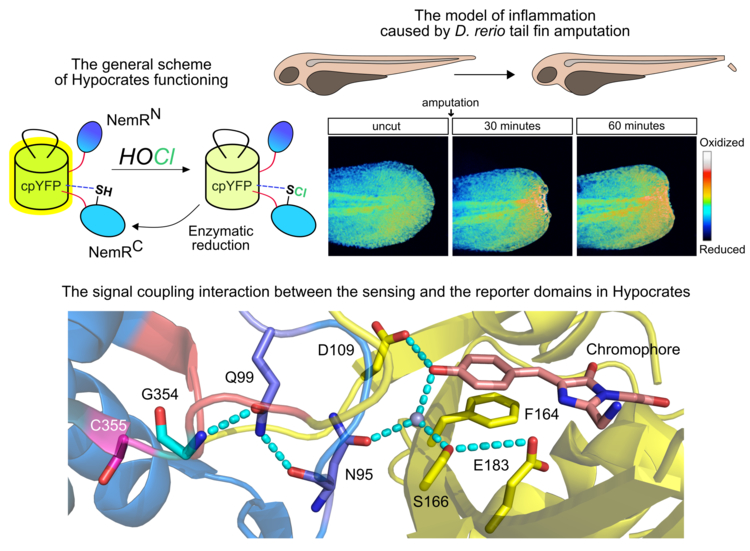