Researchers of the Laboratory are involved into computational modeling of basic “molecules of life” and supramolecular systems: proteins, nucleic acids and biomembranes. A particular emphasis is put on the membrane itself and membrane proteins — receptors, ion channels, etc. The main aim of the research is determination of these proteins’ structure, dynamics and function, since such knowledge not only explains how life works, but also permits rational design of new bioactive compounds and drugs.

Computational (or in silico) experiment, in contrast to other methods of molecular analysis, does not require real samples of protein crystals or isotopically labeled protein. Practicality of multicore workstations and computational power of the Joint Supercomputer Center of the Russian academy of sciences are employed for computational exploration of dynamics of membrane proteins and ьembrane-active peptides, as well as their interaction with ligands. Computational arsenal of the Laboratory includes, but not limited to, comparative modeling, molecular docking, molecular dynamics, etc.

Another research direction is modeling of the membrane receptors and ion channels. Particular attention is put to G-protein coupled receptors and receptor tyrosine kinases, because these are targets of numerous drugs, and their treatment potential is just have started to be developed. A study of packing statistics of membrane proteins yielded a method to assess packing of polypeptide chain and estimate the “quality” of the model.

To perform all these kinds of modeling, a database of dynamic models of various pure and mixed lipid bilayers was established, including two-component membranes with negatively charged lipids. They mimic bacterial membrane, which permits discovery and/or design of novel antimicrobial and membrane-active peptides.

The laboratory was established in 2007 from the Group of Molecular modeling in the Laboratory (now — Department) of structural biology. Now it intensively collaborates with both other departments of the Institute (e.g., Department of Molecular bases of neurosignalization and Molecular neurobiology), and with other laboratories in Russia and abroad.

Nowadays the Laboratory, as well as computational modeling of biomolecules itself, is taking the first steps towards more efficient study of mesoscopic systems and processes that take place inside the cell. In silico approach naturally extends the laboratory research, and in the near future it may play a decisive role in the treatment and even prevention of many diseases.

The Laboratory conducts research in the field of molecular modeling of biomolecular spatial structure and dynamics. The main specialization of the Laboratory is investigation of structure and function of membrane and membrane-active proteins and peptides, ligand-receptor interactions, as well as rational computer-aided design of novel biologically active compounds, including those acting on targets in biomembranes.

Main part of researches is performed in strong collaboration with experimental groups that provide the maximal efficiency of theoretical studies. All molecular simulations are carried out on modern computational facilities available in the Laboratory (multi-CPU Linux clusters, graphical stations, etc). The Laboratory has access to computational resources of the Joint Supercomputer Center of the Russian Academy of Sciences (Moscow).

1992—1997. Quantitative characterization and mapping of spatial hydrophobic properties of biomolecules. Such an analysis was done for the first time using the molecular hydrophobicity potential (MHP) approach. МHP-technique was successfully applied to study a number of water-soluble and membrane-bound peptides and proteins, as well as to assess intermolecular interactions in these systems. These approaches were implemented in a web-tool PLATINUM available on the web site of the Laboratory (http://model.nmr.ru/platinum).

1998—2000. A novel implicit membrane model was elaborated. The membrane environment is described by an additional solvation energy term, which scales potential energy of atoms depending on one of their 3D coordinates. The model allows investigation of protein-membrane interactions by Monte Carlo simulations. It is implemented in the program FANMEM – modified version of the FANTOM software (von Freyberg B., W. Braun 1991. J. Comp.Chem. 12:1065–1076).

2005—2008. Explicit full-atom models of lipid bilayers and detergent micelles of different molecular composition were elaborated. These models were used to study interactions of membrane-active peptides of different classes (fusion, antimicrobial, cell-penetrating). The structural organizations of model membranes were also investigated. Lipid composition, structural and dynamic properties of peptides were shown to play significant role in destabilization of the membrane. For several antimicrobial peptides from Lachesana tarabaevi spider venom important structure-function relationships were delineated. Based on these data, several new antimicrobial peptides with predefined activities were designed.

2004—2008. Domain motions of protein-target and hydrophobic interactions in molecular docking. We developed an original method to estimate ligand-receptor hydrophobic match and adenine-specific scoring functions based on this method. Modeling of ATP binding to P-type ATPases demonstrated that these scores were particularly efficient when ligand binding was accompanied by large scale domain motions of enzymes. These approaches were implemented in a web-tool PLATINUM available on the web site of our Laboratory (http://model.nmr.ru/platinum).

2006—2008. New approaches in modeling of transmembrane α-helical dimers were elaborated. 3D structures of the dimers formed by transmembrane fragments of several proteins (glycophorin A, receptor tyrosine kinases) were obtained using Monte Carlo simulations in the implicit hydrophobic slabs mimicking hydrophobic lipid bilayer. This was done using the FANMEM software. Full-atom membrane models were used to model transmembrane helical dimer of the pro-apoptotic protein Bnip3. These simulations were carried out with a set of NMR-derived structural restrains.

2006—2008. A method for assessment of packing quality of spatial models of α-helical membrane proteins. Scoring functions were designed to validate the theоretical 3D models of G-protein coupled receptors. The method efficiently identifies the native-like (e.g., closest to X-ray) model among large number of misleading folds.

Results of studies in the Laboratory were confirmed by several Russian patents. 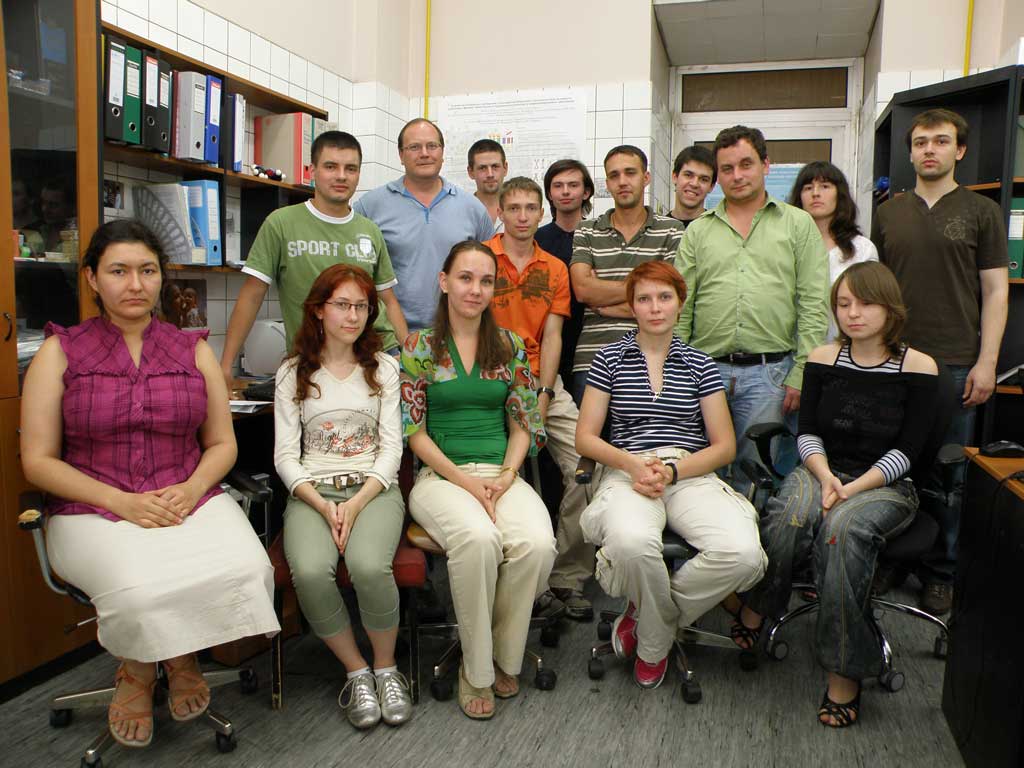