Department of Genomics and Postgenomic Technologies

Currently much attention is paid to development of new generation therapy of cancer. Within the framework of the State program «Priority fields in science and technology in Russia during 2007–2012» our lab participated in the integrated project «Development and production of the prototype of novel and effective therapies and diagnostics of the post-genome generation for use in tumor therapy». The aim of this project was the development and clinical tests of first gene therapy based preparations for treatment of lung and esophagus cancers. The approaches used in this project are based on the fundamental and methodical research performed in the laboratory. The project integrates efforts of the major scientific centers of Russia: Institute of Molecular genetics RAS, Blokhin Cancer Research Center RAMS, Shemyakin-Ovchinnikov Institute of Bioorganic Chemistry RAS, Novosibirsk State University, Institute of gene biology RAS, Gamaleya Research Institute of Epidemiology and Microbiology RAMS, and biotechnology companies Evrogen and Binnofarm. Within the framework of this project the constructions allowing for specific expression of therapeutic genes in tumor cells and systems for delivery of the therapeutic genes into tumors were developed.

Hence, the bases were established for the development and production of novel effective medical preparations and diagnostics based on gene therapy approach and biologically active proteins.

Demonstration of the fact that genes that are activated during development of lung and esophagus in embryogenesis are switched off in normal cells when they are being transformed into cancer cells and conversely is one the major achievements of the project. This confirms the hypothesis that process of cancer transformation and progression of normal cells may be compared with embryonal development or self-reproduction and differentiation of stem cells of certain tissues. The genes that express differentially in cancer and development probably play key role in tumorigenesis. Study of such genes allows carrying out a rational choice of therapeutic targets because systems regulating embryonal development and damaged in cancer are most perspective targets.

Development of new methods of production and synthesis of modified oligonucleotides with changed structure of the base or of sugar-phosphate skeleton was the mainstream of the group through the last three years. Working out of approaches to solid phase synthesis of morpholino-analogues of oligonucleotides, which have morpholine ring in their structure instead of ribose, is the most perspective direction of the research. Such analogues are uncharged molecules and resistant to nucleases. They preserve DNA structure and form stable complementary bonds with native oligonucleotides.

Synthesis of oligonucleotides bearing spacers of specified length with thiol group in certain sites is the second direction of the work. These oligonucleotides are used in study of their complexes with integrases of HIV and ASV by X-ray diffraction analysis by prof. Vlodover group (NCI, Frederic).

Microenvironment of the tumor and expression of genes (Pleshkan Viktor, Antonova Dina)

According to modern ideas, the tumor is a complex structure, consisting of the actual tumor cells and cells of the tumor microenvironment. Microenvironment, or stroma, is a cancer associated fibroblasts (CAFs), immune cells, cytokines and other elements. The stroma is necessary for maintenance of a tumor progression, protection and proliferation of tumor cells. The diverse interaction of tumor and stromal cells provides these processes. Different patterns of gene expression are characteristic of tumor and stromal cells. Many of these differentially expressed genes are key to the "tumor-stroma" interaction.

We are studying the CAFs, their main markers, and ways of influencing them as a potential target for antitumor therapy. In our laboratory, several genes with increased expression in the CAFs were identified. We investigate the promoters of these genes for tissue-specific expression in tumor microenvironment cells for use in gene therapy. We also examine the products of genes of the tumor microenvironment and their role in the progression of the tumor and the possibilities of using them to create new antitumor approaches. Thus, we investigate the effect of CTGF connective tissue growth factor on the migration of tumor cells and its relationship to other pathological processes in tumor progression. In our group, experiments are conducted to identify the potential of tumor-associated fibroblasts to act as a target in antitumor therapy. We are ready to work with new students who have the opportunity and desire to work hard on this topic. 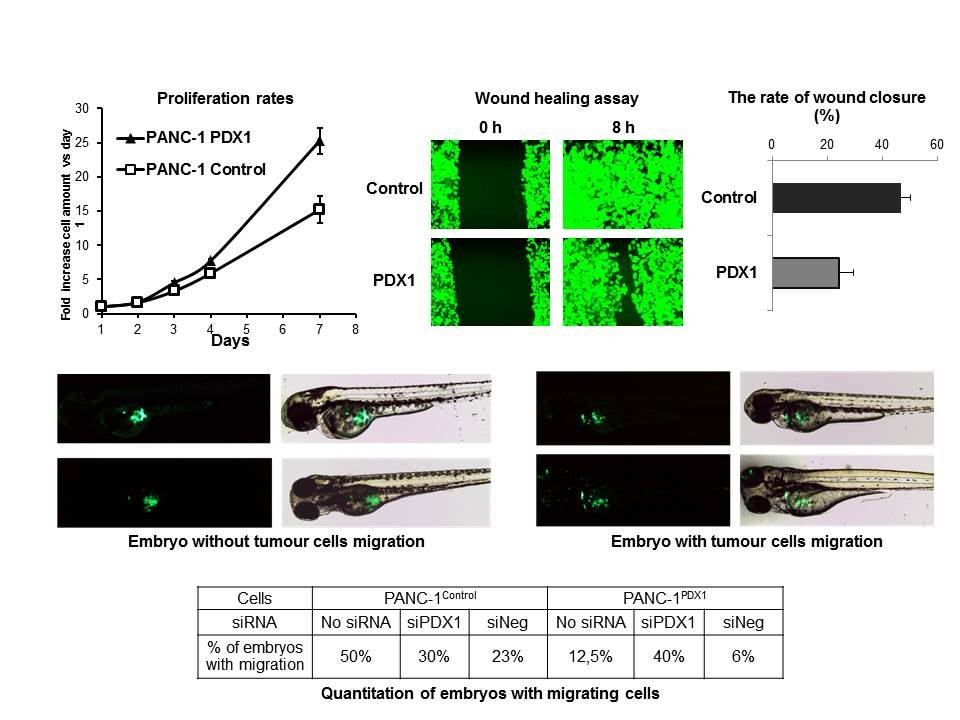 Metastasis is the main cause of death in patients with pancreatic adenocarcinoma (PDAC). We studied in vitro the effect of key regulator of pancreas development, PDX1, on the rate of proliferation and mobility of pancreatic cancer cell line PANC-1. The study of growth kinetics showed that the expression of PDX1 significantly increases the GFP-labeled PANC-1 cells growth rate. The effect of PDX1 on the migratory ability was assessed using wound healing and Transwell assays. PDX1 ectopic expression resulted in slowing down the wound healing rate and reduced the migration rate compared to control cells. In order to evaluate the possible effect of PDX1 expression on PANC-1 cells metastatic ability, an in vivo Danio rerio embryos model was used in collaboration with the Laboratory of Protein Engineering of the Institute of Molecular Genetics of the Russian Academy of Sciences. GFP-labeled control and expressing PDX1 PANC-1 cells were injected into the yolk sac area of two-day Danio rerio embryos and after 48 hours the distribution of cells in organisms was analyzed. In 50% of Danio rerio embryos, the control cells without PDX expression migrated to the vessels of the head and tail. The migration of PDX1-containing cells was significantly reduced and was observed in only 12.5% of embryos. When the expression of PDX1 was suppressed using siRNA, migrated cells were detected in 40% of embryos. This may indicate that the expression of the PDX1 gene suppresses the metastasis of cancer cells. 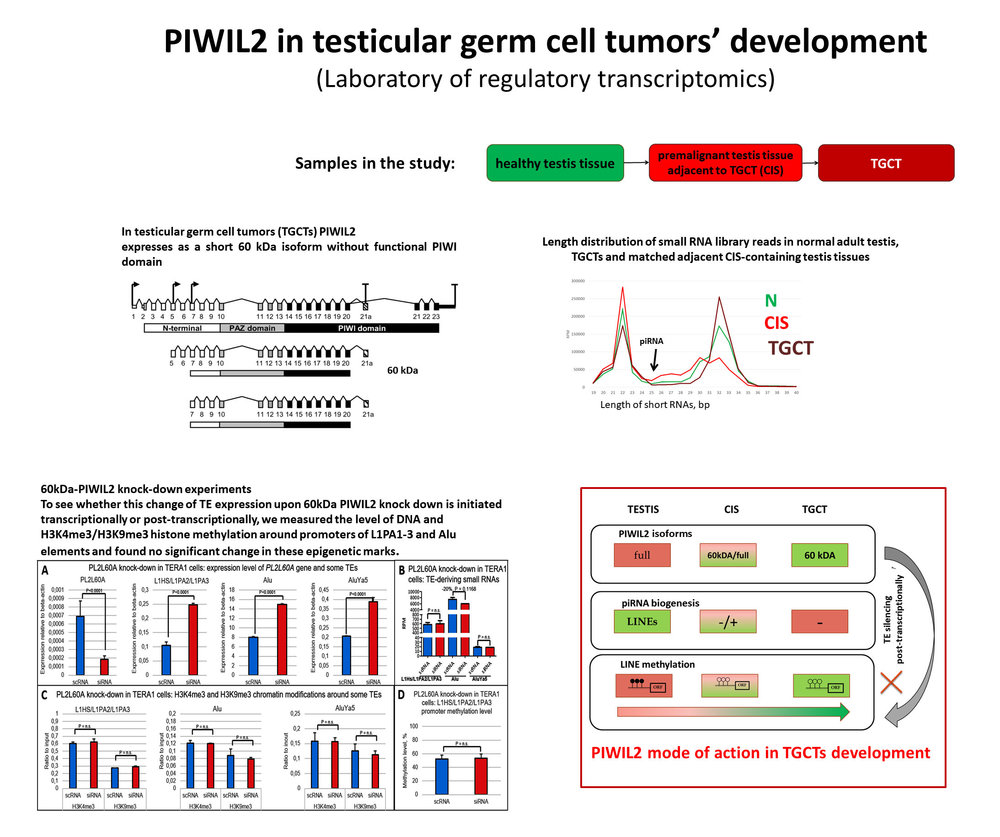 PIWILs, highly evolutionary conserved proteins, are involved in many cellular processes including carcinogenesis. They function in combination with short non-coding RNAs (piRNAs), determining genomes stability, preventing expression and transposition of mobile elements. We studied functions of the PIWI/piRNA system in germ testicular cells, as well as in testicular germ cell tumors development, and showed predominant expression of short 60 kDa PIWIL2 isoform. Herewith, there is no piRNA biogenesis in tumor cells, and the short PIWIL2 isoform suppresses the expression of young LINE and SINE transposon families post-transcriptionally, which can provide advantages for tumor growth by maintaining the stability of its genome. 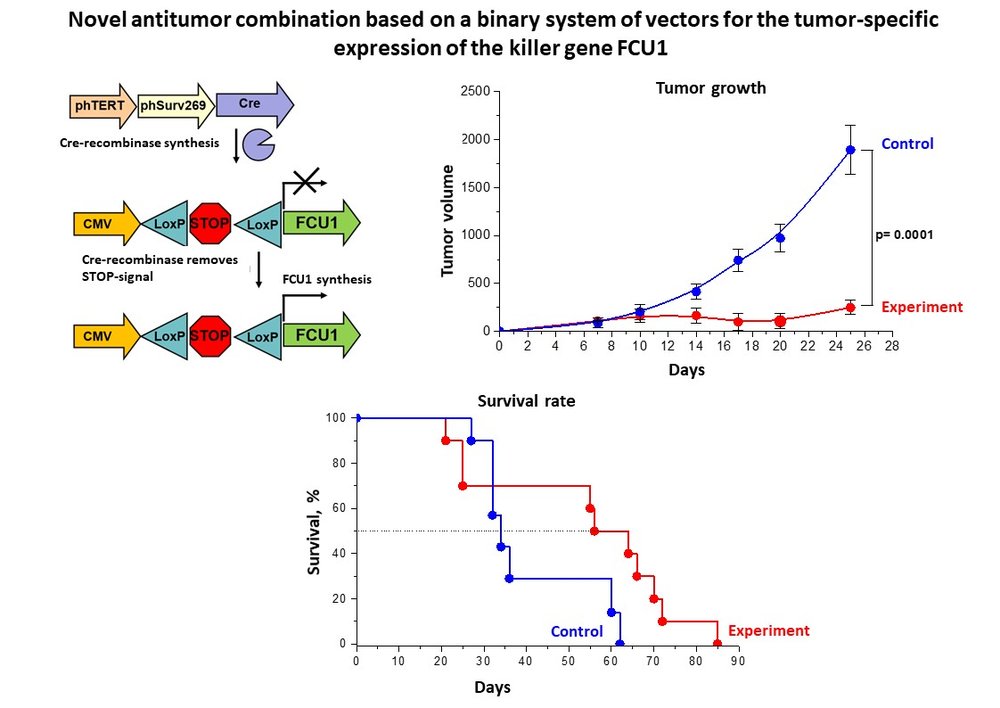 Despite advances in cancer treatment, cancer remains the second leading cause of death after cardiovascular diseases. Therefore, the search for new effective and low-toxic approaches to the treatment of cancer is an extremely important challenge. Cancer gene therapy, which is based on the delivery to a tumor of genes causing growth inhibition or death of cancer cells, is one of the promising directions. A gene-therapeutic complex was created in which a modified binary cre-loxP system and the artificial promoter PhTSurv269 created by us earlier were used to control the expression of the suicidal FCU1 gene. Under the conditions of a mouse adenocarcinoma model, a high therapeutic potential of the complex under study was demonstrated.

A novel approach to design of tumor-specific promoters. Construction and analysis of a combinatorial library of chimeric promoters which consist of random combinations of promoter modules 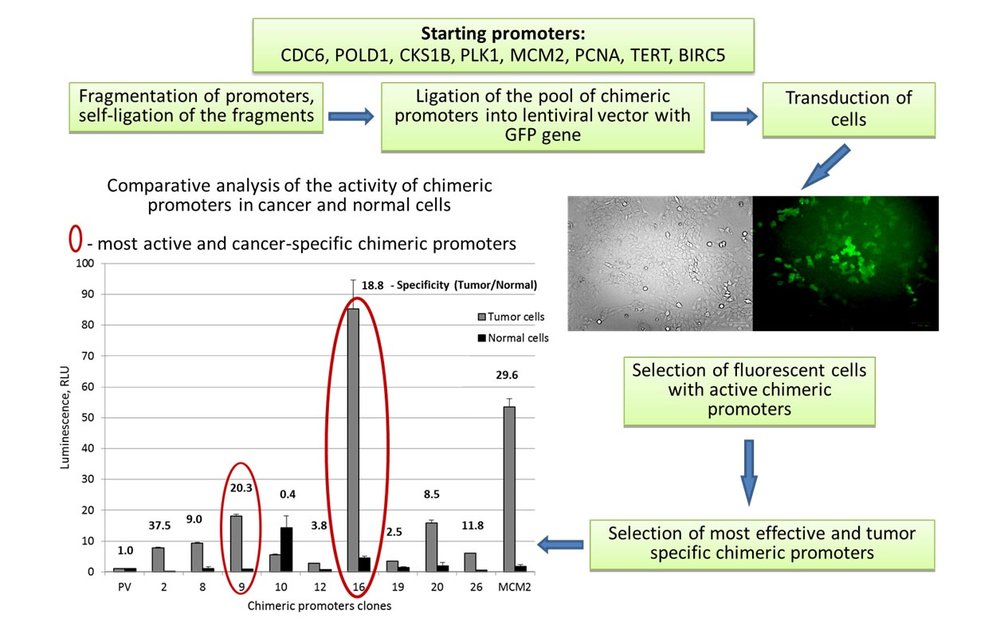