Molecular and applied biology of plant viruses, bacterial diseases of plants, mechanisms of plant resistance to stresses, functions of the cell nucleus and subnuclear structures, genomic technologies of potatoes.

The Laboratory of Molecular Bases of Plant Stress Resistance was established as a part of the Shemyakin-Ovchinnikov Institute of Bioorganic Chemistry RAS branch in Pushchino in 2017. The organization and financing of the Laboratory is carried out at the expense of the mega-grant of the Russian Federation Government No. 14.W03.31.0003 on the topic "New functions of the cell nucleus and complex resistance of potato plants to diseases and physiological stresses" within the framework of the state support of scientific research program conducted under the guidance of leading scientists in Russian Educational organizations of higher education, scientific institutions subordinate to the Federal Agency of Scientific Organizations, and state scientific centers of the Russian Federation.

The activity of the laboratory is aimed at obtaining comprehensive knowledge of the complex stresses in plants mechanisms, developing new approaches and identifying key target genes necessary to protect plants from the impact of various stresses on the growth, development and productivity of plants. The main scientific interests of the Laboratory are focused on the study of new functions and processes that provide plant protective responses and localized in the nucleus of the plant cell. The nucleus is supposedly the central element in coordinating responses to biotic and abiotic stresses. At the moment, the combined effects of viral (potato virus Y, PVY and bacterial (Clavibacter michiganensis subsp., Cmm / Cms) pathogens and heat stress on potato plants are being studied. This can contribute to the creation of new potato varieties adapted to climate change and its consequences. 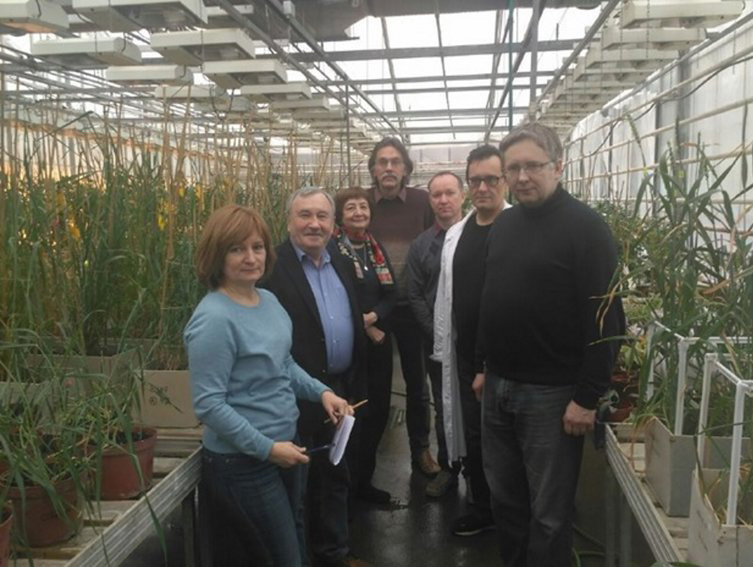 The work of the Laboratory is conducted in close cooperation with companies located in the Industrial Park “Rogachevo” (Doka-Gene Technologies Ltd and and PhytoEngineering Ltd), the leading Russian companies in the field of potato breeding and genetics. They will help developing and applying new approaches to obtaining healthy seed potatoes (in the short term) and the development of potato breeding programs (in the longer term). Such interaction will create on the basis of the results obtained in the Laboratory a number of new and innovative approaches and technologies that will be introduced into the real sector of the Russian agro-industrial complex.

In 2018, the Megagrant scientific team included researchers of the Laboratory of Functional Genomics and Proteomics, IBCh RAS. 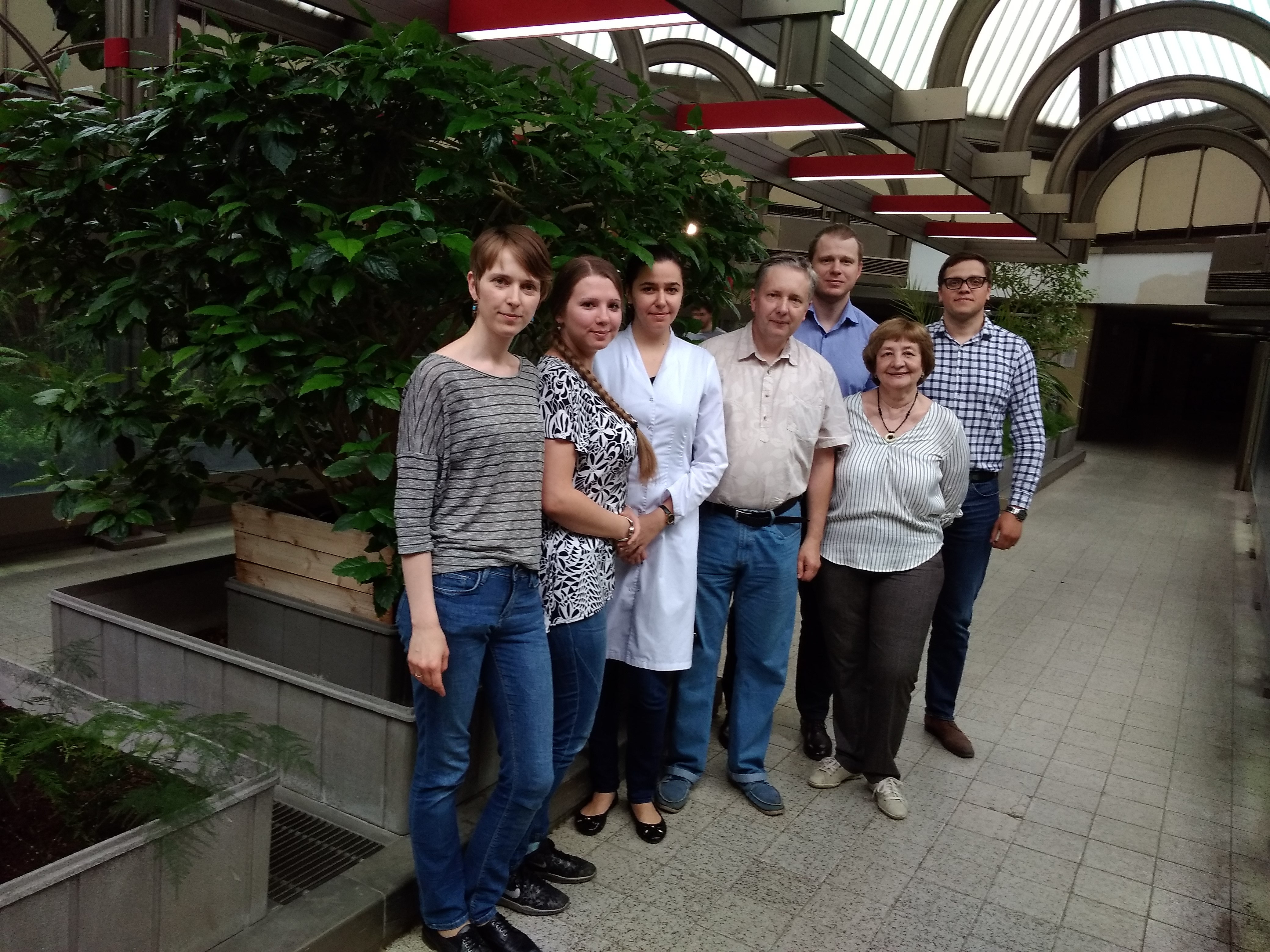 • Identification of potato genotypes contrasting on the basis of resistance / susceptibility to combined biotic and abiotic stress, in particular, to co-infection with viruses and bacteria under conditions of heat stress.

• Characterisation of phenotypic, physiological and molecular responses of contrasting potatoe genotypes to individual and combined stresses. Intranuclear localization of coilin in WT plants, uninfected (mock) or infected with wild‐type TRV (TRV), TRV∆16K mutant or transiently expressing 16K only (16K, 3 dpi). N, nuclei are indicated by dashed lines according to DAPI staining; positions of nucleoli (No) and Cajal bodies (CBs) (shown by arrows) have been confirmed by colocalization with fibrillarin (a nucleolar and CB marker). Bars, 5 μm.

Schematic representation of proteins interacting with fibrillarin and coilin. 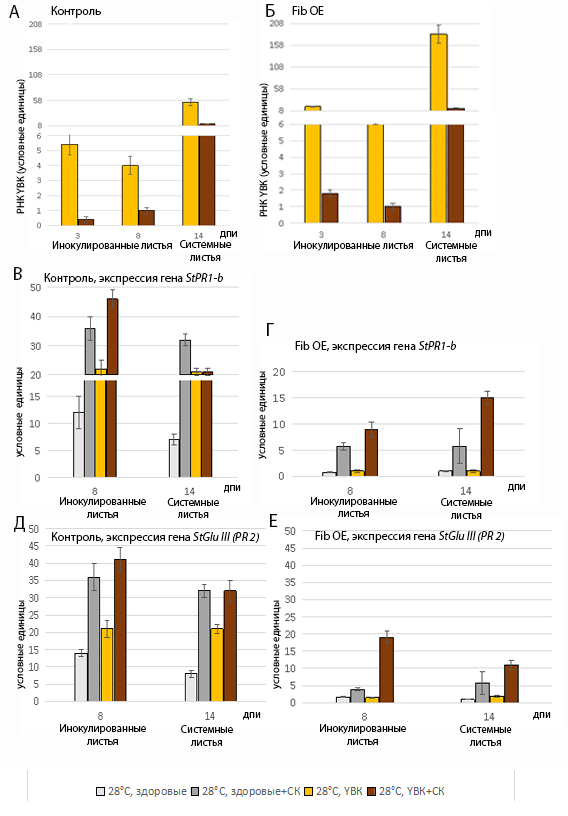 The main proteins of Cajal's bodies - coilin and nucleolus - fibrillarin act as sensors for viral infection and heat stress by modifying the activity of poly(ADP-ribose) polymerase, resulting in the activation of a late stage of the plant defense response. Chicago plant and transgenic lines with overexpression of gene Rab28 growing in conditions of drought (lack of watering) for 21 day and PVY level in control plants and transgenic lines, infected with virus at normal(22°) and elevated (28°, heat stress) temperatures at 21 dpi. For 2017-2019 the results are published in 6 articles (another 1 article is at the preparation stage) in leading international scientific journals indexed by the Web of Science Core Collection database in the in the selected field of studies of the scientific research project (included in the first quartile Q1). Two patent applications for inventions filed. The results were widely presented to the All-Russian and international scientific community at 16 international conferences in reports (oral and poster). Based on research materials, 3 PhD Thesises are under preparation. In November, the final All-Russian Conference will be held. Spechenkova Nadezhda, junior researcher of the Laboratory of molecular bases of plant stress resistance, took part in the 44th FEBS international conference “From molecules to living systems”, which was held from July 6 to 11, 2019  in Krakow, Poland. She presented a poster "Comparative proteomic analysis of two potato varieties under biotic and complex stresses". Makhotenko Antonida, junior researcher of the Laboratory of molecular bases of plant stress resistance, took part in the 44th FEBS international conference “From molecules to living systems”, which was held from July 6 to 11, 2019  in Krakow, Poland. She presented a poster «Nucleolar fibrillarin as a negative regulator of resistance to biotic and abiotic stresses mediated by salicylic acid».

Successful implementation of the megaproject “New functions of the cell nucleus and integrated resistance of potato plants to diseases and physiological stresses” by the Government of Russia No 14.W03.31.0003 continues.

The POSTGENOM Conference is the largest international conference held annually in the Russian Federation. It is a platform for the exchange of knowledge and best practices of leading Russian and foreign scientists working in fundamental and applied fields of science. M.E.Taliansky was invited to make a presentation at the POSTGEN-2018 conference. Also at the conference Kalinina N.O., a member of scientific team presented a poster on the molecular response of potato plants to stresses of various nature.

The 2018 EMBO conference was dedicated to the study of the role of the target of rapamycin (TOR) kinase, which is the main regulator of eukaryotic cell growth. Recent data show that TOR combines signals arising from biotic and abiotic stresses to control and regulate plant growth, metabolism and development. Member of the scientific team Kalinina N. presented a poster report “Response of potato (Solanum tuberosum cv. Chicago) plants to biotic, abiotic and combined stresses”.

Founded in 1963, the International Association of Plant Biotechnology is the largest international professional organization representing the interests of plant biotechnology specialists around the world, and since the beginning of the 60s has successfully held symposia around the world on the most significant topics in the field of plant biotechnology, such as cultivation in vitro and morphogenesis, food safety, plant nutrition, and more. Member of the research team Miroshnichenko D. presented a poster report.

On August 15, 2018, the Potato Forum 2018 was held on the basis of Doka-Genetic Technologies LLC, a leading private breeding and genetic center (Rogachevo, Dmitrovsky district, Moscow region), dedicated to promising technologies and innovations in the agricultural industry. The Forum was attended by the Assistant to the President of the Russian Federation A.A. Fursenko, Secretary of the Council of the Federal Scientific and Technical Program for the Development of Agriculture for 2017-2025 E.K. Nechaeva, General Director of the Innovation Promotion Fund S.G. Polyakov, academician, vice-president of the RAS I.M. Donnik, academician, director of the Shemyakin-Ovchinnikov Institute of Bioorganic Chemistry RAS A.G. Gabibov, Assistant Minister of Higher Education and Science E.V. Zhuravleva, Head of the Office of Programs and Projects of the Russian Science Foundation A.N. Blinov, Vice-Rector of the Russian State Timiryazev Agricultural University S.L. Belopukhov, Minister of Agriculture of the Moscow Region A.V. Razin, Head of the Dmitrovsky District, E.B. Troshenkova. Fesenko I. made a report on omix technologies as a tool for searching for genes responsible for useful plant traits, in particular, resistance to complex stresses.

The leading scientist, M. Talyansky, took part in the 17th International Congress of the Union of Microbiological Societies in Singapore (July 17-21, 2017). He presented the work carried out as part of a Megaproject to study the role of the cell nucleus and sub-cellular structures, nucleolus and Cajal bodies in the cell cycle and systemic infection of the potato virus Y.

The results obtained during the research were presented at Russian and international conferences. A. Ignatov presented the results of studies on various aspects of the genetics and evolution of pathogenic bacteria that affect a wide range of host plants, including potato plants, as well as the diversity of individual bacterial proteins and antibacterial activity of silver nanoparticles and complex nanoparticles (silver / copper) in the form of reports and poster presentations at the II All-Russian conference with international participation “High-performance sequencing in genomics”, Novosibirsk (2 reports); at the 8th Moscow Conference on Computational Molecular Biology, MSSMV'17, Moscow (1 post); in the International Scientific Conference on Bioorganic Chemistry “XII READINGS OF MEMORY OF ACADEMICIAN YURI ANATOLYEVICH OVCHINNIKOV” and the VIII Russian Symposium “PROTEINS AND PEPTIDES” (2 reports); at the conference of the Association of Applied Biologists Advances in IPM 2017: Reinventing agriculture to reduce dependency on pesticides at Harper Adams University, Newport, Shropshire, UK (1 post); at a conference of the British Society of Plant Pathologists (BSPP) / BMS (British Mycological Society) Joint presidential Conference (1 post).

At the 42nd Congress of the Federation of European Biochemical Societies (FEBS) “From molecules to cells and back”, Ierusalim, Israel, 2017 Makarova S. presented results indicating the possible role of proteins of the nucleus such as coilin and fibrillarin in plant resistance to abiotic stress factors.

In collaboration with Laboratory of functional genomics and plant proteomics In plants of susceptible cv Chicago, accumulation of five proteins involved in methylation processes is reduced (shown in green), whereas in plants of resistant cv Gala, accumulation of cystathionine beta lyase and SAM-dependent methyltransferase (shown in red), involved in metabolism of  S-adenosyl methionine (methyl-group donor) is significantly increased. We have also analysed expression levels of some methionine cycle proteins using quantitative RT-PCR. Comparison of RT-PCR and proteomic data has demonstrated that decrease in accumulation of methionine cycle proteins in susceptible Chicago plants occurs at the translational rather than transcriptional level. It is suggested that susceptibility to stresses in potato cv Chicago plants may be related to reduced amount of proteins involved in methylation.

In collaboration with Laboratory of functional genomics and plant proteomics The nucleolus and Cajal bodies (CBs) are sub-nuclear domains with well-known roles in RNA metabolism and RNA-protein assembly. However, they also participate in other important aspects of cell functioning. In collaboration with the James Hutton Institute we have described a previously unrecognised mechanism by which these bodies and their components regulate host defence against pathogen attack. It has been shown that the major proteins of CBs (coilin) and the nucleolus (fibrillarin) interact with poly(ADP-ribose) polymerase (PARP) and modify its function, and that this interaction is modulated by the tobacco rattle virus 16K protein.

Our results reveal that PARP a nuclear protein, modifies the function and subcellular localisation of a variety of nuclear “target” proteins (acceptors) by attaching chains of ADP ribose (PAR) to them. To re-activate these target proteins PARP shuttles them from both the nucleolus (NO) and chromatin to CBs for PAR removal and recycling (Fig 1a). In response to TRV infection plants initiate defence responses as evidenced by the over-accumulation of reactive oxygen species (ROS) and some increase in levels of pathogenesis-related (PR) PR-1a transcripts and callose deposits (markers of antivirus defence response). Upon TRV infection, the 16K protein is produced in the cytoplasm and is targeted to the nucleus (Fig 1b). In the nucleus (CBs and nucleoplasm) the 16K protein interacts with coilin and re-localizes it to the nucleolus, which in turn traps PARP within this sub-nuclear domain, preventing its trafficking from the nucleolus for PAR cleavage and recycling. This leads to over-accumulation of PAR/PARylated proteins and significant enhancement of the defence responses (such as PR-1a gene expression and callose deposition). Callose deposition presumably directly restricts TRV spread to newly emerging leaves (Fig. 1c).

Mega-grant from the Government of the Russian Federation The Laboratory of Molecular Bases of Plant Stress Resistance was established in 2017 when Professor M. Taliansky was awarded a mega-grant from the Russian government on the topic "New functions of the cell nucleus and complex resistance of potato plants to diseases and physiological stresses". The activity of the laboratory is aimed at obtaining comprehensive knowledge of the complex stresses in plants mechanisms and identifying key target genes necessary to protect plants from the impact of various stresses on the growth, development and productivity of plants.