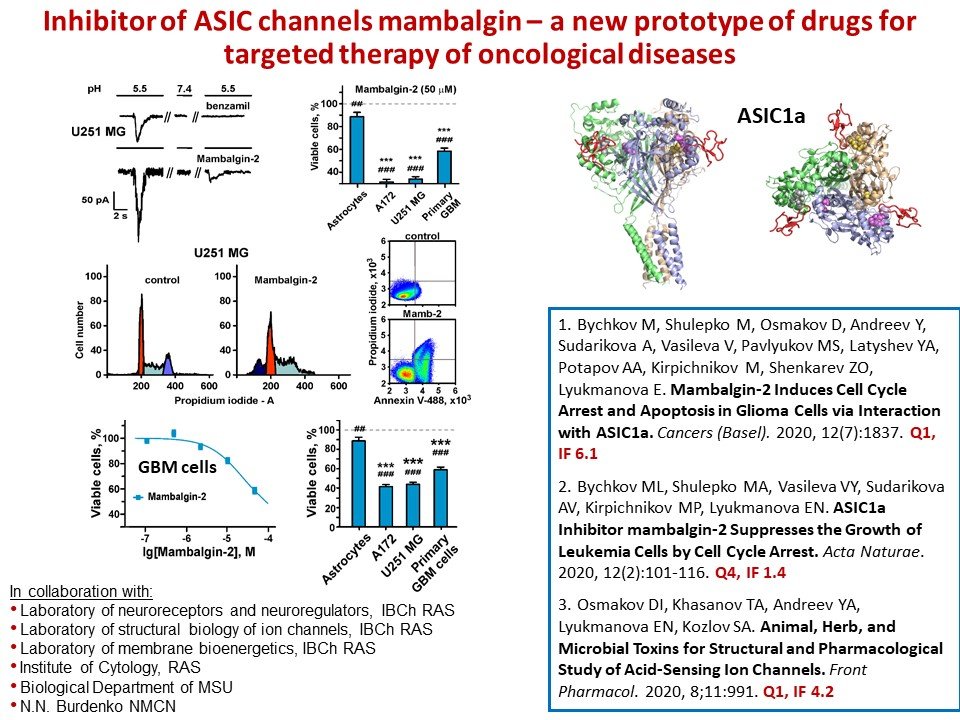 Acid-sensitive channels ASIC1 are a molecular target of three-finger toxins from black mamba venom (Dendroaspis polylepis) - mambalgins. Mambalgins effectively inhibit homo- and heteromeric receptors containing the ASIC1a subunit; however, the possibility of their use as antitumor agents has not been previously studied. It was shown that ASIC1a mRNA is expressed in cells of chronic myelogenous leukemia and gliomas, but not in normal cells. Mambalgin-2 inhibited the growth of U251 MG and A172 glioma cells with EC50 in the nanomolar range, without affecting the proliferation of normal astrocytes. Interestingly, mambalgin-2 mutants did not affect the growth of glioma cells, indicating ASIC1a as the main molecular target of mambalgin-2 in glioma cells. Mambalgin-2 caused cell cycle arrest, inhibited phosphorylation of cyclin D1 and cyclin-dependent kinases (CDK), and induced apoptosis in glioma cells. In addition, mambalgin-2 inhibited the growth of the primary cell culture obtained from a patient with glioblastoma. Our data point on mambalgin-2 as a promising prototype of drugs for the targeted treatment of oncological diseases, and channels containing the ASIC1a subunit as a new target of targeted therapy. 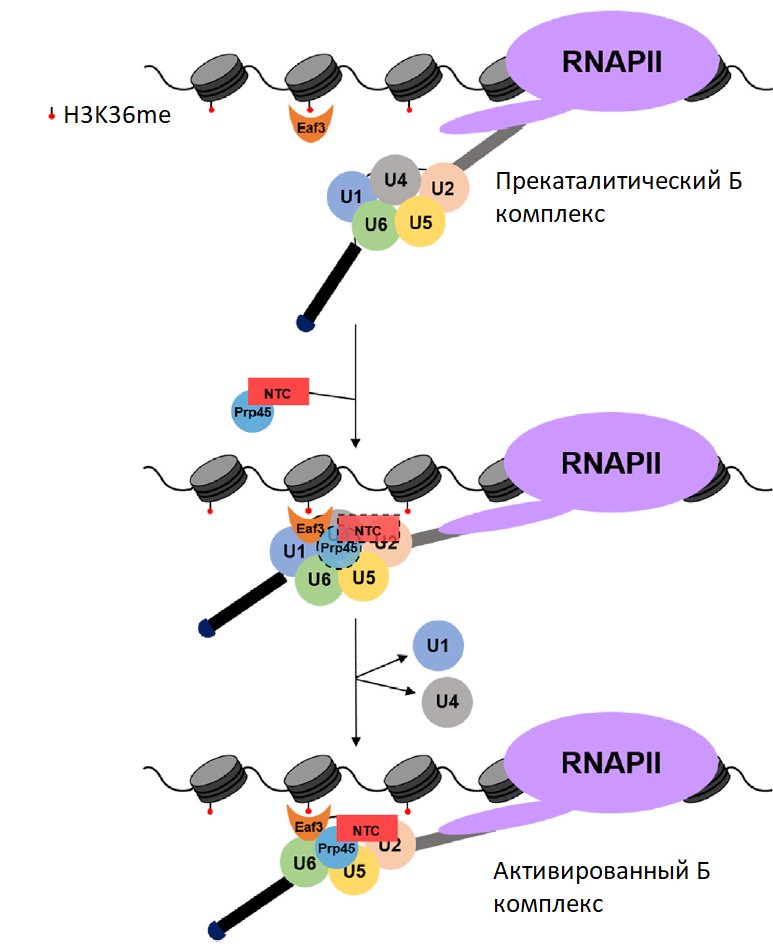 Spliceosome assembly takes place in the context of the chromatin environment, suggesting that the state of the chromatin may affect splicing. The molecular details and mechanisms through which chromatin affects splicing, however, are still unclear. Here, we show a role for the histone methyltransferase Set2 and its histone modification, H3K36 methylation, in pre-mRNA splicing through high-throughput sequencing. Moreover, the effect of H3K36 methylation on pre-mRNA splicing is mediated through the chromodomain protein Eaf3. We find that Eaf3 is recruited to intron-containing genes and that Eaf3 interacts with the splicing factor Prp45. Eaf3 acts with Prp45 and Prp19 after formation of the precatalytic B complex around the time of splicing activation, thus revealing the step in splicing that is regulated by H3K36 methylation. These studies support a model whereby H3K36 facilitates recruitment of an “adapter protein” to support efficient, constitutive splicing. Leung et al. demonstrate that H3K36 trimethylation facilitates efficient pre-mRNA splicing through the association of chromodomain protein Eaf3. Eaf3 binds to methylated H3K36 at intron-containing genes to stabilize association of the splicing factor Prp45 and regulate proper cotranscriptional spliceosome assembly. 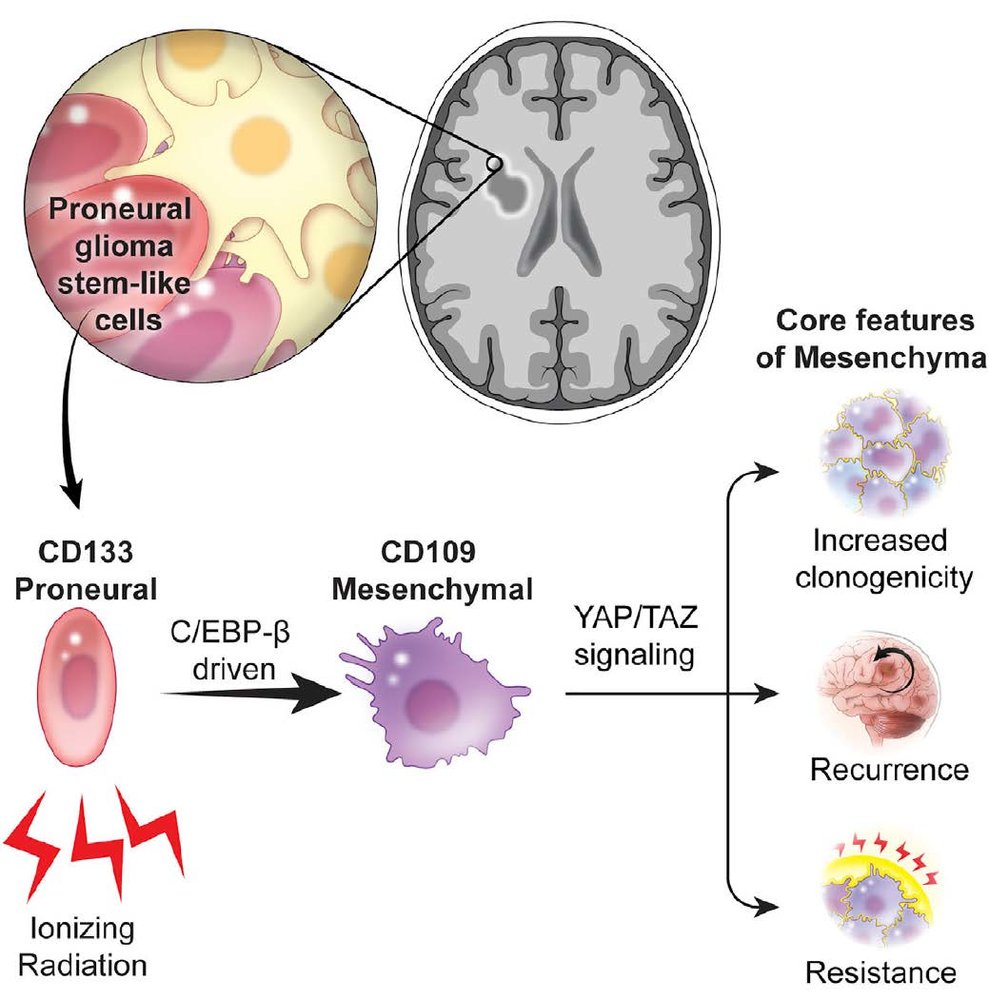 Unresectable glioblastoma (GBM) cells in the invading tumor edge can act as seeds for recurrence. The molecular and phenotypic properties of these cells remain elusive. Here, we report that the invading edge and tumor core have two distinct types of glioma stem-like cells (GSCs) that resemble proneural (PN) and mesenchymal (MES) subtypes, respectively. Upon exposure to ionizing radiation (IR), GSCs, initially enriched for a CD133+ PN signature, transition to a CD109+ MES subtype in a C/EBP-β-dependent manner. Our gene expression analysis of paired cohorts of patients with primary and recurrent GBMs identified a CD133-to-CD109 shift in tumors with an MES recurrence. Patient-derived CD133−/CD109+ cells are highly enriched with clonogenic, tumor-initiating, and radiation-resistant properties, and silencing CD109 significantly inhibits these phenotypes. We also report a conserved regulation of YAP/TAZ pathways by CD109 that could be a therapeutic target in GBM.

In collaboration with Group of Cross-Linking Enzymes

A novel mechanism of communication between tumor cells mediated by intercellular transport of spliceosomes has been demonstrated. Investigation of clinical samples from patients with ovarian cancer, as well as primary cultures of human glioblastoma cells, allowed us to observe that, upon induction of apoptosis, many tumor cells secrete into the extracellular environment various components of the spliceosome, a ribonucleoprotein complex that splices RNA molecules in eukaryotes. During the early stages of apoptosis the spliceosomes are transported from the nucleus to the cytoplasm, and then are secreted inside membrane vesicles (exosomes). These vesicles can be captured by neighboring tumor cells, and the splicing proteins contained therein affect mRNA splicing in the recipient cells. This leads to the formation of different protein isoforms and the acquisition of a more aggressive and treatment-resistant phenotype of surviving tumor cells. One of the key players of this process was identified as the RBM11 protein, which is readily transferred between glioblastoma cells and regulates alternative splicing of important oncogenes such as MDM4 and CyclinD1.