The unit was disbanded in 2018. It is part of the unit Laboratory of molecular design and synthesis.

Researchers are developing a substance with a high antiviral activity based on polycyclic aromatic hydrocarbon perylene. Group obtained a large number of compounds both nucleoside-based and non-nucleoside nature. These compounds have a broad spectrum of action, for example they can inhibit the replication of many enveloped viruses, such as herpes simplex virus, influenza, encephalitis, Hepatitis C etc.

The Group is engaged in the creation of fluorescent dyes to DNA probes. Researchers got functional derivatives of already both known and new dyes, as well as effective methods of its introduction in DNA probes, such fluorogenic DNA probes Taqman type or Molecular beacons for Real-Time PCR. The subject of the study is not only conjugates with dyes, but with proteins, as well as oligonucleotide-oligonucleotide conjugates which may serve as building blocks for assembling DNA nanostructures.

On the basis of stabilized carbocations are developed mass-spectrometric labels for biomolecules in a leaving (mass tags) and not cleaved off (derivatization) versions. In the first case are detected the actual labels which undergo analytical manipulation stage, being attached to the biomolecule, and then cleaved and detected on a mass spectrometer. In the second case, the ionic labels serve to improve the ionized analyzed molecules; the mass spectrum is detected a molecule conjugate with the label. Mass labels used for the detection of DNA mutations, for the determination of aminoglycoside and glycopeptide antibiotics, low molecular weight amines and thiols. For example, modification of low molecular weight volatile amines can easily detect them via HPLC, and reduce the detection limit of these amines.

The Group of Bioconjugation was formed in 2010 as a result of the grant program "Molecular and Cellular Biology" of the Presidium of Russian Academy of Sciences for the new groups.

A new class of antiviral compounds has been found

In collaboration with Laboratory of organic synthesis 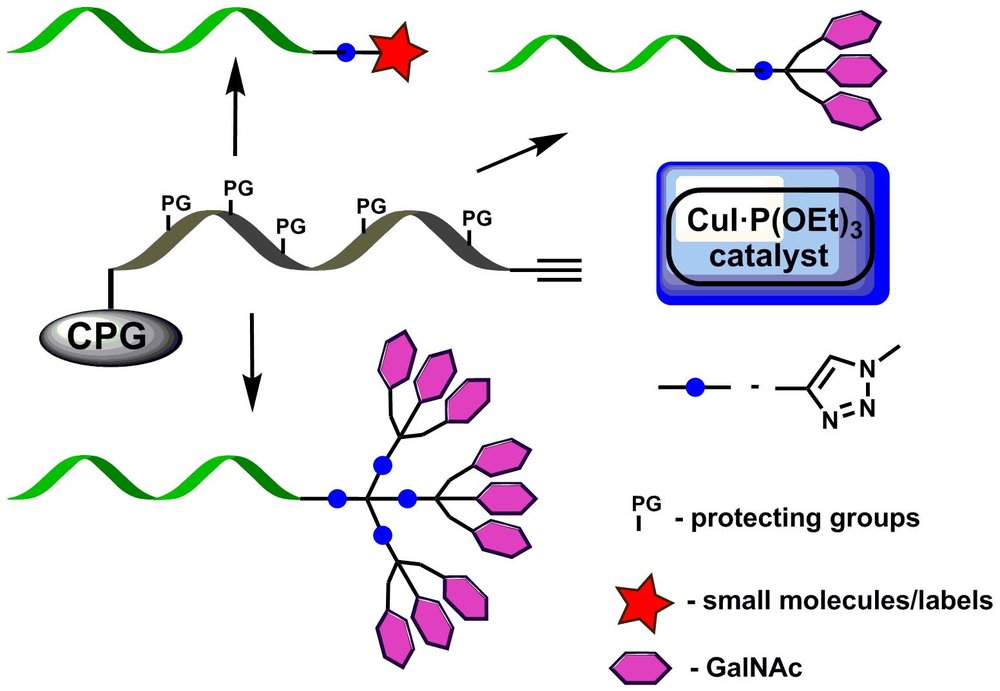 1-Pyreneacetamide, 1-pyrenecarboxamide, and DABCYL derivatives have been used in preparation of molecular beacon (MB) probes labeled with one or two pyrenes/quenchers. The pyrene excimer formed by two rigid 1-pyrenecarboxamide residues showed the brightest emission. Increase of the excimer fluorescence for MBs after hybridization with DNA was up to 24-fold.

We developed a novel technique for the efficient conjugation of oligonucleotides with various alkyl azides such as fluorescent dyes, biotin, cholesterol, N-acetylgalactosamine (GalNAc), etc. using copper-catalysed alkyne−azide cycloaddition on the solid phase and CuI·P(OEt)3 as a catalyst. The approach is suitable for highthroughput synthesis of oligonucleotide conjugates ranging from fluorescent DNA probes to various multi-GalNAc derivatives of 2′-modified siRNA.