The main focus of the group of genetically engineered biopharmaceutical technologies are the development of fundamental and applied aspects of biotechnology and the application of own technologies in the production of biopharmaceutical drugs. The group carries out a full cycle of works in genetic engineering and protein chemistry ‒ from choosing the gene cloning strategy and its chemical enzymatic synthesis to developing a method for isolation, purification, complete physical and chemical identification and research of biological activity, expression scaling and fermentation stage, and also the creation of laboratory and pilot manufacturing technology protocol, which are implemented in conjunction with the Experimental Biotechnological plant (EBP). Special attention is paid to the development of biotechnologies for the production of biologically active pharmaceutical substances (APS) and the creation of finished pharmaceutical product (FPP) based on recombinant proteins and peptides, fullfilled by the Experimental Biotechnological plant (EBP) of IBCh RAS.

The group, which is part of the laboratory of biotechnology, successfully participates in government programs: Pharma 2020, the Federal Space Program of Russia, grants from the Russian Science Foundation and the Russian Foundation for Basic Research. The team members are the winners of the competition of young scientists at the Moscow International Conference "Biotechnology and Medicine", "UMNIK".

The team members have extensive experience in creating and further verifying a wide range of recombinant proteins produced using protein splicing technologies. The teamwork of the group and the Experimental Biotechnological plant of the IBCh RAS allowed in the shortest possible time to organize the manufacturing of pilot batches of potential drugs within the framework of state contracts of the Ministry of Industry and Trade and the Ministry of Education and Science for preclinical studies.

On October 27, 2016, employees of the Institute of Bioorganic Chemistry of the Russian Academy of Sciences conducted an excursion for the participants of the vocational guidance project of the Bauman Library ON. Nekrasov "Tomorrow".

One of the main achievements of the group of genetically engineered biopharmaceutical technologies together with the Experimental Biotechnological plant (EBP) of of IBCh RAS is the development and implementation of domestic technology the production of active pharmaceutical substance (APS) of human genetically engineered glucagon (headed by Acad. AI Miroshnikov). The project was implemented in 2012-2015 with the support of the Ministry of Industry and Trade of the Russian Federation. Obtaining of APS was the beginning of developmen of the finished pharmaceutical form of glucagon - “GLUCORAN” (glucagon recombinant, human genetic engineering, lyophilisate for preparing injection solution of 1 IU / mg). Completion of this project made it possible to prepare a drug registration dossier for production on the basis of EBP of IBCh RAS and pharmaceutical forms of human genetic glucagon.

Under the leadership of Roman S. Esipov, 4 candidates and more than 25 bachelor`s and master's degrees have been defended. 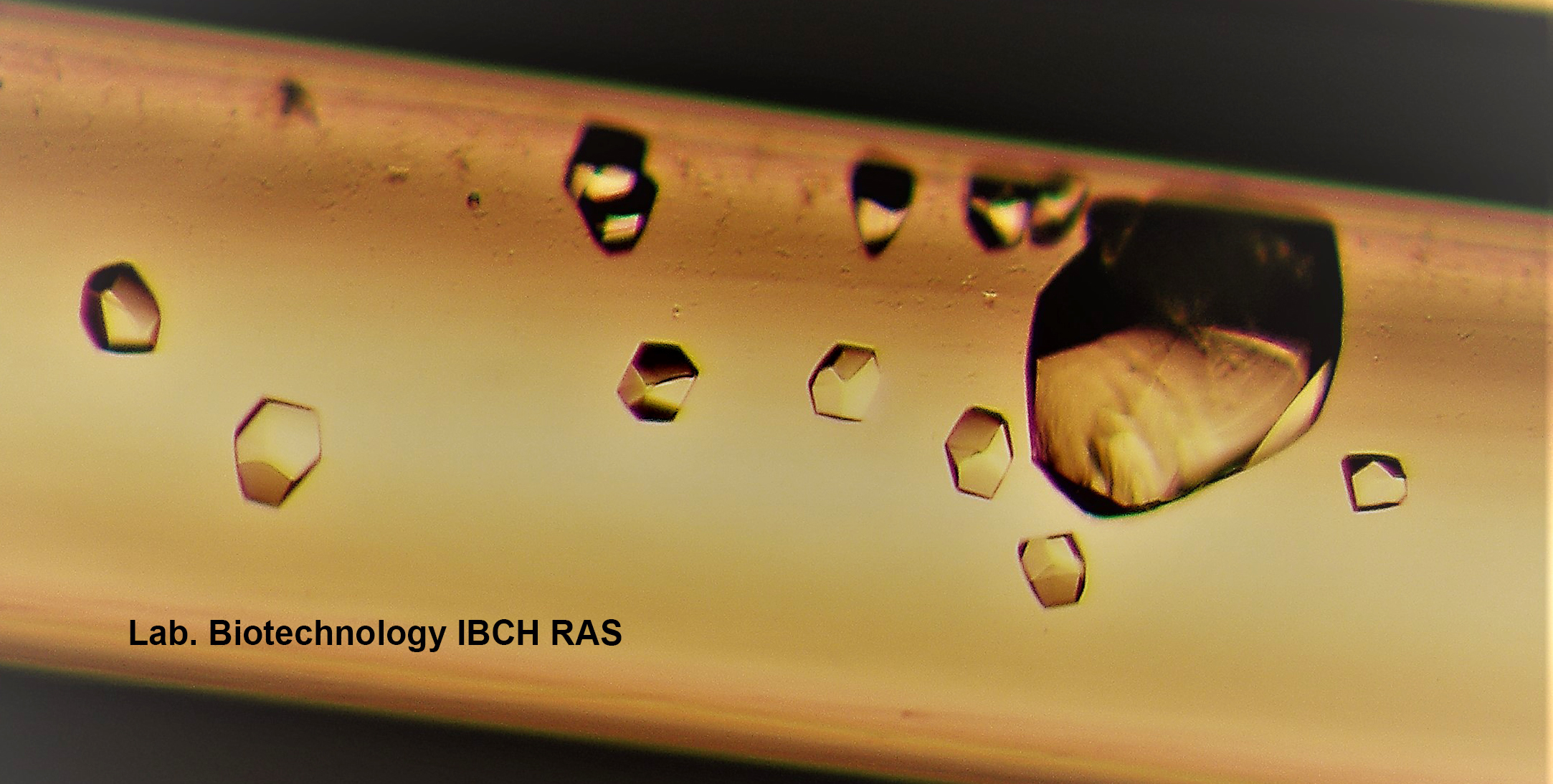 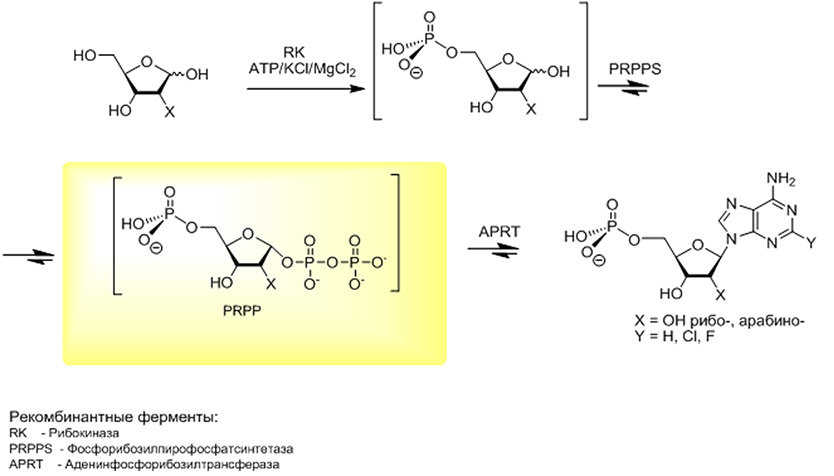 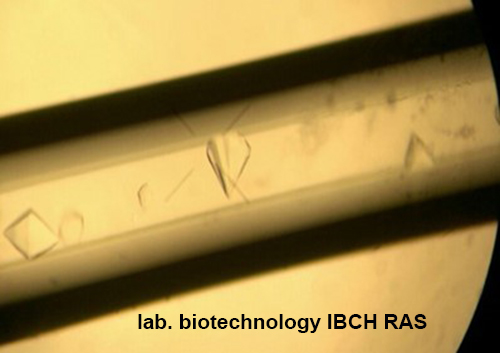 Phl p I from Phleum pretense

Amb a 1.1 from Ambrosia artemisiifolia

The group carries out a full cycle of works in genetic engineering and protein chemistry ‒ from choosing the gene cloning strategy and its chemical enzymatic synthesis to developing a method for isolation, purification, complete physical and chemical identification and research of biological activity, scaling of the fermentation stage (from 250 ml to 200 l) and protein purification (from 1 mg to 10 g), and also the creation of laboratory and pilot manufacturing technology protocols A new strategy of cascade synthesis of modified nucleotides was implemented using enzymes of thermophilic microorganisms (ribokinase RK from Thermus species 2.9, phosphoribosylpyrophosphate synthetase (PRPPS) and adenine phosphoribosyltransferase (APRT)/hypoxanthine phosphoribosyltransferase (HPRT) from Thermus thermophilus HB27) carry out successive transformations of ribose and purine heterocyclic bases into corresponding nucleotides. The comprehensive studies of determination of the kinetic parameters of enzyme- catalyzed reaction and optimization of the conditions for the cascade synthesis of modified nucleotides were performed. The potential nucleotide 5'-monophosphates with antiviral and anti- cancer activities were synthesized using multi-enzymatic cascade. Crystallization of thermophilic apo-enzymes and enzymes-ligands complex and subsequent X-ray structural analysis were carried out. Structures of the APRT and complex PRPPS/ADP/SO 4 2- were solved and deposited into RCSB Protein Data Bank with PDB entries 6fsp (at 2.5 Å resolution) and 5t3o (at 2.2 Å resolution), respectively. Three-dimensional structure of the ribokinase was solved at 1.9 Å resolution. A method for the production of monocojugates of recombinant human thymosin β4 (Тβ4) with capronic acid, polysialic acid 14 kDa and polyethylene glycol 10 kDa has been developed. As a result of multifactorial experiments, the components of the reaction mixtures were identified, and conditions of those reactions were optimized. For each analog, we developed a single-stage RP HPLC purification procedure that enabled to attain the purity of no less than 98%. The peptide mapping results backed up by chromatography-mass spectrometry and electrophoresis demonstrated that the produced Тβ4 analogs are monoconjugates in which the initial peptide is modified at the N-terminal serine residue. The produced analogs feature a higher resistance to degradation in the blood plasma as compared to non-modified Tβ4, and they can be regarded as promising candidates for further biological testing.