The research of the Laboratory is aimed at revealing the role of lipids as molecules that transmit information in the body regulation system. One of the directions is the study of signaling pathways that mediate the lipids ability to enhance proliferation or induce apoptosis, protect cells of the nervous system from the effects of damaging factors, induce cell differentiation and morphogenesis. Lipids are important regulators of a wide range of normal and pathological processes in the body, so the search for lipid molecules with more selective action is also at the center of the Laboratory's attention.

The main object of the Laboratory's research is natural oxylipins (prostaglandins, etc.), natural neurolypes (conjugates of fatty acids with biogenic amines, neurotransmitters and amino acids) and their synthetic analogues.

Earlier, the Laboratory staff (Bezuglov et al., 1995) suggested that the acylated derivatives of endogenous neurotransmitters can be a new family of bioregulators combining the properties of neuroactive lipids (anandamide) and classical neurotransmitters (dopamine, serotonin, etc.). Acyl-dopamines and derivatives of fatty acids with various amino acids were then found in the nervous and peripheral tissues of various organisms, including mammals. It turned out that these compounds have a wide range of biological effects that continue to be studied at the Laboratory.

The Laboratory discovered new ways of metabolizing acyl-dopamines and clarified some aspects of their biosynthesis. Also, the team showed that acyl-dopamines  has a neuroprotective effect and it is able to induce apoptosis of the oncotransformed cells of various tissue origin in vitro, which indicates the large pharmacological potential of these substances. Now the researchers are investigating the mechanism of their toxic and differentiating effects on cancer cells, and also seek to increase the effectiveness of existing antitumor drugs.

To fight neurodegenerative diseases, an important socially significant problem, the Laboratory developed a strategy for searching for new neuroprotectors and protecting neurons from irreversible changes under the influence of stress. This approach is based on the use of the natural neuroactive lipids, peptides and other low-molecular bioregulators potential. Researchers managed to show that some modified acyl-dopamine are promising candidates for treatment of stroke consequences. In addition, the Laboratory is developing methods of directional delivery compounds to neurons capable to slowing down and reversing the neurodegenerative process.

Researchers of the Laboratory actively use modern methods of cell and molecular biology, fine organic synthesis, analytical chemistry and biochemistry.

The Laboratory was founded in 1990 on the basis of the Group of Prostaglandins and Leukotrienes.

Targeted drug delivery to dopaminergic neurons by the functionalized derivative of the dopamine transporter inhibitor GBR12909: a proof of concept. 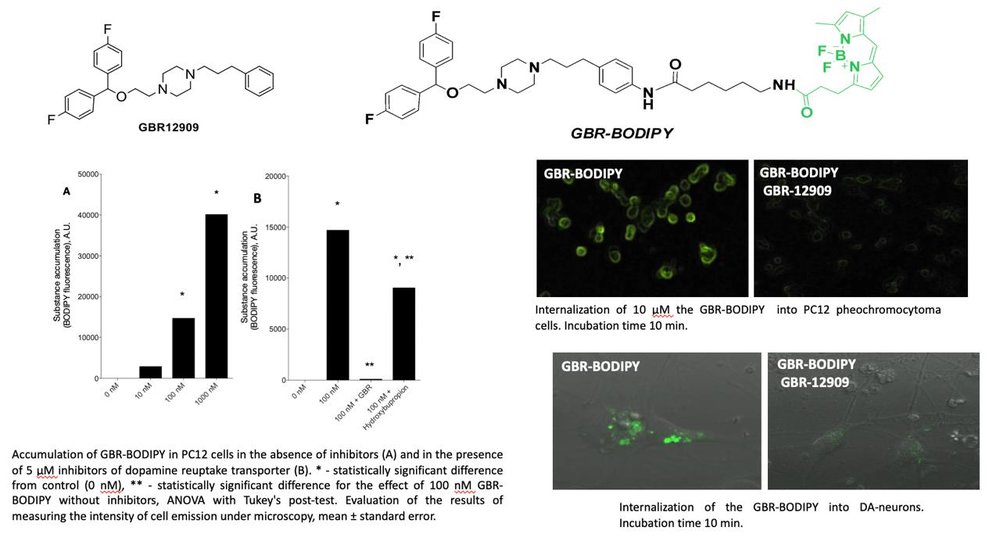 New fluorescent analogues of acyldopamines with the preserved the address moiety 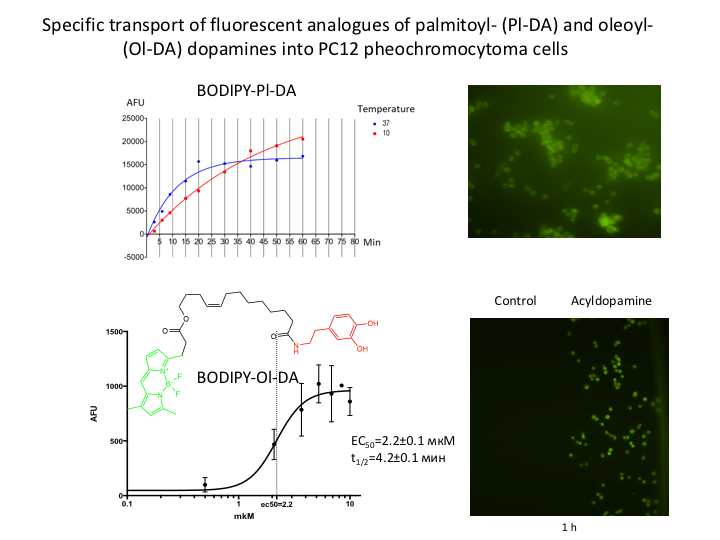 New fluorescent analogues of natural acyldopamines mimicking residues of palmitic and oleic acids carrying the reporter BODIPY group at the distal end of molecule were synthesized. The specific uptake of mentioned compounds in rat pheochromocytoma PC12 cells was demonstrated and characteristics of this process were measured. Uptake rate of oleic analogue was more than three times as palmitic one. Synthesized compounds are ready to be used for investigation of acyldopamine transport in various cells of human or animal origin.

Modified peptides based on proglyprol structure with increased effectiveness

Hybrid compounds based on proglyprol (PGP) peptide carrying residues of docosahexaenoic acid and (or) dopamine were synthesized for the first time. Prepared compounds possess advanced neuroprotectory  and anti-inflammatory activity and may consider as prototypes of novel pharmaceuticals.