From cytoskeleton to pluripotency: a new mechanism for regulating stem status of the embryonic cells

Researchers from the Laboratory of Molecular Bases of Embryogenesis (Shemyakin-Ovchinnikov Institute of Bioorganic Chemistry RAS), in technical cooperation with colleagues from the Department of Metabolism and Redox Biology (Shemyakin-Ovchinnikov Institute of Bioorganic Chemistry RAS), the Laboratory of Genomics and Epigenomics of Vertebrates in the Federal Center "Fundamentals of Biotechnology" RAS, as well as with colleagues from the Cell Motility Group of the Institute of Protein Research RAS, discovered a previously unknown mechanism of the regulation of the activity of genes that determine the pluripotent status of the embryonic stem cells.

The LIM-domain protein Zyxin plays a central role in the discovered mechanism. It was previously known that the main function of Zyxin in the cell is the regulation of the assembly of actin filaments at the cytoplasmic part of cell contacts. In addition, Zyxin can shuttle into the nucleus, playing the role of a signal transmitter from cell contacts to the genome. This movement of Zyxin into the nucleus is induced, for example, by exposing the cell contacts to mechanical stresses. In this regard, it is assumed that Zyxin plays an especially important role in embryonic development, when it is necessary to coordinate the morphogenetic movements of cells, which generate mechanical stresses in tissues, with gene expression. The authors of this work have shown that suppression of Zyxin activity in embryos of Xenopus laevis frog decreases the expression of genes regulating cell differentiation, but at the same time enhances the expression of genes responsible for the maintaining of the pluripotent status of the embryonic stem cells. Using the genes of the pou5f3 family as an example (these genes are homologs of OCT4, one of the master genes that determine the status of embryonic stem cells in humans), it was found that an increase in the concentration of pou5f3 mRNAs occurs due to their stabilization as a result of the formation of a complex with the Y-box-mRNA-binding factor Ybx1. However, Zyxin, by binding to Ybx1, prevents the formation of complexes between Ybx1 and pou5f3 mRNA, which accelerates its degradation. A similar effect of Zyxin was revealed with respect to mRNA of other major genes of pluripotency of the embryonic stem cells: Klf4 and Vent1/2 (the amphibian homologs of the well-known mammalian pluripotency gene NANOG). In support of the universality of the discoveried mechanism, similar effects of Zyxin were demonstrated by the authors for mRNA of genes for KLF4, NANOG, and OCT4, on such models as zebrafish embryos and human embryonic kidney cells. All these data indicate that Zyxin plays the role of a switch between stem and differentiated status of embryonic cells. Considering the important role of Zyxin as a regulator of cellular morphogenetic movements, it is logical to assume that the processes of morphogenesis and cell differentiation may be coordinated during embryogenesis using the mechanism discovered by the authors of this article. The article was published in Cell Reports. 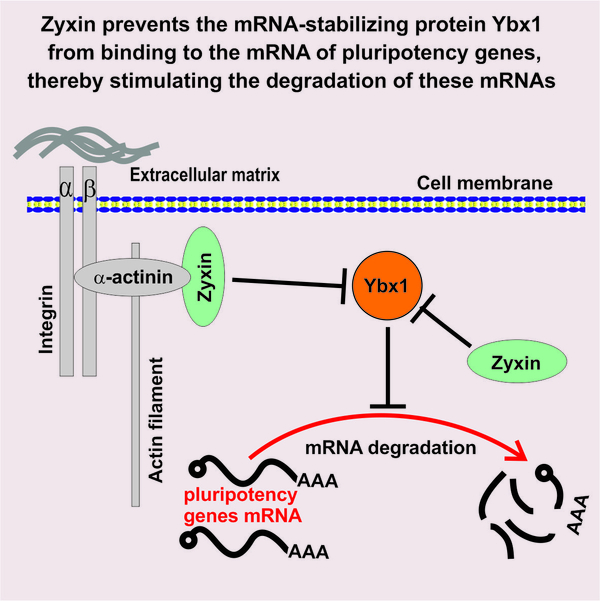