Scientists from the Laboratory of biomolecular modeling of the IBCh RAS, together with colleagues from Columbia University (New York, USA), the University of Illinois (Peoria, USA), and the Institute of Physiology of the Czech Academy of Sciences (Prague, Czech Republic), have revealed the structural mechanism of heat-induced opening of temperature-sensitive TRP channels. 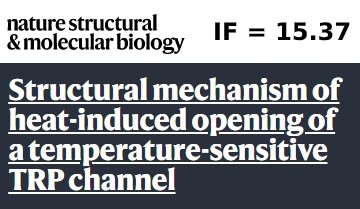 TRPV3 is a polymodal receptor that works as a temperature sensor in skin keratinocytes. For the first time, the team of scientists succeeded in capturing the protein in a closed, sensitized (intermediate), and open state using Cryo-EM. Based on the structural data, the authors proposed the molecular mechanism for the thermal activation of the channel, which represented the so-called "conformational wave" of rearrangements within the protein and its lipid environment. Molecular dynamic simulations of TRPV3 have illustrated the channel conductance in various states and tracked the dynamics of lipids in the vanilloid pocket. Presumably, these lipids play the role of "flexible fuses" that regulate protein conformational changes in response to heat. This work was published in the prestigious journal Nature Structural & Molecular Biology and was awarded a cover of the issue.