First crystal structure of bacterial oligopeptidase B in an intermediate state: the roles of the hinge region modification and spermine

Oligopeptidase B (OpB) is a two-domain serine peptidase with trypsin-like substrate specificity. OpB belongs to the prolyl oligopeptidase (POP) family and are found only in bacteria and protozoa. It is known that OpB are pathogenesis factors of protozoan infections and protect bacterial cells from a number of antimicrobial peptides. Nevertheless, they are the least studied representatives of POP, especially bacterial OpB, for which there was a complete lack of structural information. The researches from IBC RAS together with those of NRC Kurchatov Institute and the IBOC of the National Academy of Sciences of Belarus managed to obtain crystal structures of bacterial OpB from Serratia proteomaculans (PSP) with a modified hinge region.

The main characteristic of OpB and other POP is the presence of a regulatory domain that restricts access of substrates with sizes larger than 3 kDa to the active center located in the cavity between the domains. The domains are connected by a hinge region, which allows peptidases to take two conformations: closed (active) and open (inactive). In the closed conformation, the catalytic and regulatory domains, as well as the residues of the catalytic triad, are close to each other, and in the open they are separated, which prevents catalysis, but facilitates the access of substrates to the active center. Open and closed conformations were found in OpB structures from Trypanosoma Brucei (TbOpB) and bacterial POP crystallized in free form and in complexes with irreversible inhibitors, respectively.

An unusual conformation was found in the first crystal structure of bacterial OpB, which was characterized by the closeness of the domains without the convergence of the residues of the catalytic triad, and presumably served as a transition between open and closed conformations. In addition, spermine molecules were present in the interdomain cavity of the PSP, which, together with the modification of the hinge region, contributed to crystallization.

Since the composition of the cytoplasm is much richer than buffer-salt solutions used in biochemical and structural studies, the intermediate state found in the work is most likely widespread in vivo, and the observed spermine-dependent conformational transition reproduces the behavior of OpB in bacterial cells. Two-stage catalytic activation, in which the convergence of domains precedes the formation of the working configuration of the catalytic triad, can both coexist with the direct transition from the open to the closed state, which was proposed for TbOpB and bacterial POP, and be the main pathway for the catalytic activation of bacterial OpB.

The work was carried out with the financial support of the Russian Science Foundation, grant No. 21-74-20154 and published in the Biology journal. 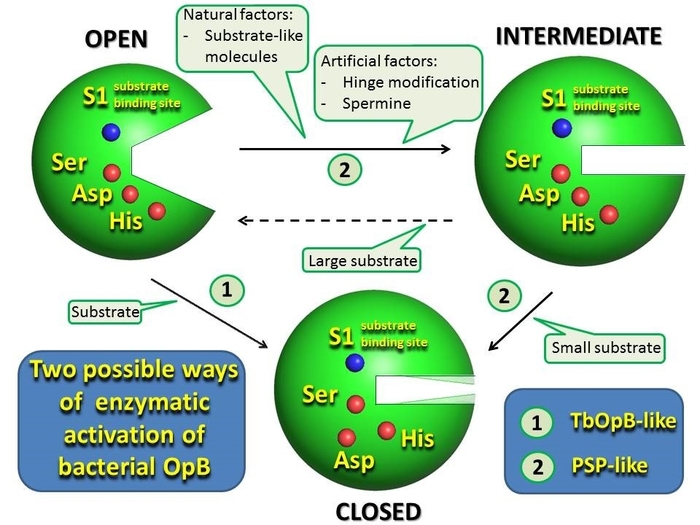