Archaea, initially known as archaebacteria, mostly are extremophiles: they thrive environments of high temperature, pressure, salinity and acidity. Probably, “special path” of archaea was predestined by unique properties of their membranes, which significantly differ from bacterial and eukaryotic ones. In Laboratory of biomolecular modeling at IBCh, Russian Academy of Sciences, a computational study was conducted to discover relationship between chemical structure of archaeal lipids and physical properties of the membranes. The work was published in Scientific Reports.

Archaea are the third domain of life, according to Carl Woese [1]. Undistinguishable through the eye-lens of the microscope from other microorganisms — bacteria, — they dramatically differ in molecular organization and the econiche occupied: often you can find them in extreme conditions of hot, salty and acidic geysers or in the deep-water hydrothermal vents. Archaea almost never are parasitic either pathogenic, and their total biomass, according to many estimates, is comparable or even exceeds the mass of all other living organisms on the planet.

Specific evolutionary fate of archaea is interesting not only from the standpoint of fundamental biology that studies the origin and evolution of life on the Earth. Since many archaea are extremophiles and their enzymes are extraordinary stable, they are exploited in molecular biology, biotechnology and “green” chemistry. There is reason to believe that not only individual molecules, but also archaea themselves will find utility in environmental chemistry and biogeochemistry, as well as in pharmacology.

One of the hallmarks of archaea are biomembranes that differ significantly from bacterial and eukaryotic ones. Whilst two latter are always formed by the bilayer of different phospholipids with hydrophobic moiety presented by a fatty acid residue, archaeal membranes’ possess branched isoprenoid chains, often linked with their tips in such a way that the membrane is not a bi-, but the monolayer. Apparently, this structure determines the ability of archaea to thrive in the extreme conditions, and this is another thing that people can borrow from these microorganisms: bionanomaterials based on archaeal lipids may once play an important role in industry and medicine.

However, before rational design of new nanomaterials based on these molecules comes true, it is essential to uncover which chemical characteristics of archaeal lipids render the membranes densely-packed, uncompressible, lacking phase transition in a wide temperature range °C), and almost impermeable for water and ions especially. With all these properties considered, it’s all the more interesting that the membrane remains liquid-crystalline, which is vital for any cell.

Researchers from the Laboratory of Biomolecular Modeling (IBCh RAS) has aimed to establish the relationship between the properties of the membrane and structure of forming lipids using computer simulations [2]. The key difference from the “common” phospholipids was the linkage of two molecules from the opposite surfaces of the membrane by their two hydrophobic tails (characteristic of the so-called bolalipids) and the chemical nature of the isoprenoid hydrophobic tails themselves. Unlike “straight” tails of fatty acids, these molecules have lateral methyl (—CH3) groups at each four main chain carbon atom and, additionally, a chain-incorporated cyclopentane ring is encountered sometimes. Five “mimetic” molecules that differ by the number of “branching” groups where chosen for investigation. Model membranes were assembled from these molecules, and molecular dynamics was calculated to analyze the structural and dynamic parameters of these virtual monolayers.

The main result of the calculations was visible by the “naked eye”: in the case of “straight” chains, the membrane was very rigid and devoid of dynamic mobility, which is typical for a “gel-like” phase state of the lipids (imagine margarine). A fundamentally different picture was observed in the case of a membrane composed of methyl-branched lipids: phase state can be denoted as “liquid crystal”, characteristic of native membranes (see figure). Three other systems exhibited intermediate properties, depending on the number of side chain substituents.

The studied model membranes were quite different from the “common” phospholipid bilayers by packing parameters (in particular, the almost complete lack of free volume inside the hydrophobic core). These parameters determine the key features of the archaeal membranes. The study was published in December 2014 in Scientific Reports [2]. 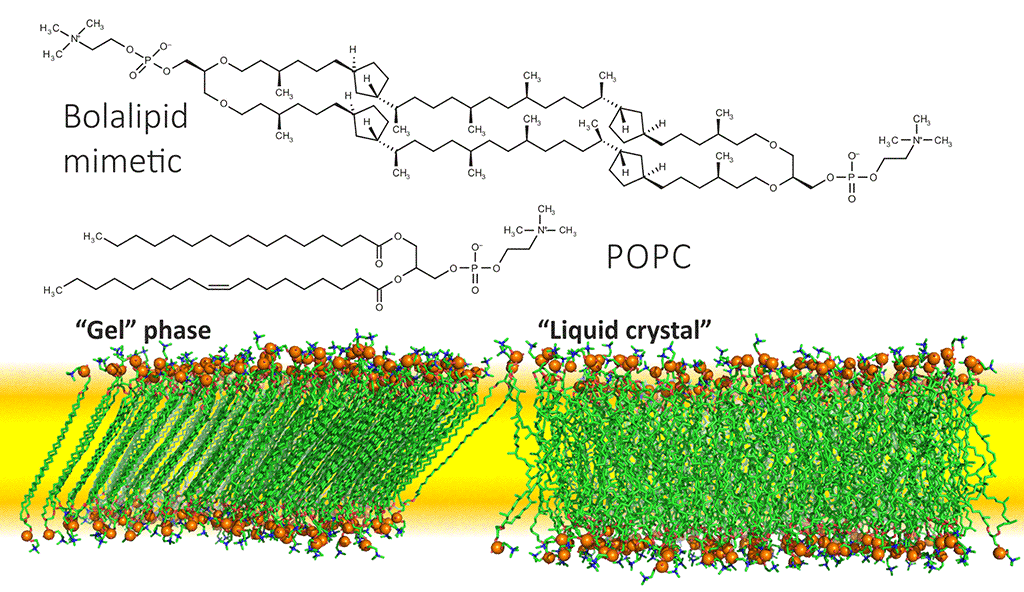 The chemical structure of lipids determines the physical properties of biomembranes. On the top: the chemical structure of one of the “model” archaeal lipids and a common eukaryotic phospholipid (palmitoyloleoylphosphatidylcholine, POPC). Bottom left: model membrane composed of lipids with “unbranched” tails exhibits a “gel” state. Characteristic here is the high ordering of individual molecules, their “stretched” shape, mutual collinearity and a high tilt angle with respect to the plane of the membrane. The same would happen with a “common” bilayer phospholipid membrane, given the “opposite” molecules would be linked by their tips. Bottom right: the membrane with branching methyl groups is in a “liquid crystalline” state, which is vital for any living cell.

This finding clearly illustrates that the unique properties of archaeal membranes are determined by the chemical structure of the hydrophobic tail: branched isoprene structure permits both liquidity and high-density packing of the membrane (durability). “Straight” fatty acid tails in phospholipids of bacteria and eukaryotes inevitably lead to the phase transition at the one side of temperature range and to the loss of temperature stability, at the other. Perhaps it was the “lipid divide” event that predestined evolutionary fate of Archaea on Earth [3].

This study is a part of the interdisciplinary project on archaeal membranes, supported by the Russian Foundation of Basic Research grant 13-04-40326-N. Another involved party from IBCh was the Laboratory of lipid chemistry, which performs chemical synthesis of archaeal lipids’ mimetics for the experimental investigation of physical properties of corresponding membrane films. In addition to the IBCh, two other organizations from the Russian Academy of Sciences are involved — Institute of Physical Chemistry and Electrochemistry and Institute of Microbiology, — and also Moscow Institute of Steel and Alloys. The output of the project will be recommendations on the structure of nanomaterials based on archaeal lipids: in particular, it can be liposomes with unique characteristics which will find application in the pharmaceutical industry as a new drug delivery vehicle.