D. Bairamashvili, Director of Experimental biotechnology plant of IBCh: “I decided to take on this only because of my excitement”

Since Leonard Thompson was made first insulin injection in the history of world medicine, it has taken about 90 years. Today, diabetes is a recognized non-infectious epidemic, and in 2010 it’s hit more than 2 million people only in the Russian Federation. However, only ten years ago the government understood that it would be nice to establish native production of genetically engineered insulin. Previously, of course, it has spent on procurement from abroad more than few millions of rubles.

About what actually was and is happening now told Director of Experimental biotechnology plant of the Institute Dmitry Bairamashvili to press-center of IBCh RAS.

— A new surge of insulin «hysteria» has fallen to 1996. I do not know if there is even more politicized pharmaceutical product than that. We used to have natively produced only animal insulin — from the pancreas of pigs and cattle. And so, in the late 80’s of last century, the former Ministry of Health USSR ordered: allow using only human insulin. But where we were able to get it? Government began buying from Novo Nordisk (Denmark) and Eli Lilli (U.S.A.). Just think, every year for the purchase of human insulin they spent up to 200 million dollars! 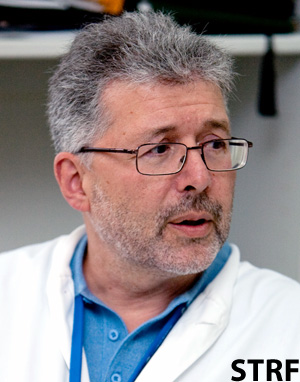 Dmitry Bairamashvili —  Ph.D. in chemistry, Director of production (Experimental biotechnology plant — EBP) of IBCh RAS, laureate of the Russian Federation Government award in the field of science and technology. EPB of the Institute has first in Russia full production cycle of genetically engineered human insulin («Insuran ®»). Up to date there are 75 people employed, whose objects are genetically engineered human insulin, human growth hormone (somatropin), granulocyte colonie-stimulating factor and disaccharide from Micrococcus Lyzodeikticus (intermediate in the production of immunу adjuvant Licopid).

— But what happened next? I know that that the Institute of Bioorganic Chemistry began to produce it.

— In IBCh we possessed producing strains of recombinant human insulin (although a patent for it was made only in 1999) and equipment for fermentation, 10 years as not functioning. Then there weren’t any special conditions for the production of insulin in the Institute. But this time we had established production of disaccharide — an intermediate in technology of Licopid immune adjuvant (scientific development of IBCh in 80’s). To produce it, we had been buying cylindrical aquariums, used to make industrial chromatographic columns. The cost of all this was only about two thousand dollars. But a real column was worth no less than Bentley!

At the same time we solved the personnel issue. Three geologists by training came to: now one of them is the chief engineer, the other — the chief of production and technical department, the third — until recently was the head of department of isolation and purification, and now works in Pokrov for our partner company «Generium». By the way, our workshop managers of industrial fermentation and finished dosage forms came from the Institute of Antibiotics and the Institute of blood substitutes.

— Nevertheless, you managed to restore production in a fairly quick time.

— In 1996 I decided to take on this only because of my excitement. To date, the parameters of all processes of life-support systems of the biotechnology plant are derived by remote control in front of the building — as it had been planned originally. I mean ventilation, steam, water temperature, cold rooms, and much more — everything is continuously monitored and recorded.

Here for example, it’s needed the «purified water» and «water for injections» to produce. For these purposes, in the basement of EBP (experimental biotechnology plant —  Ed. note) was a Finnish plant for ion-exchange water treatment.

Today everyone knows that you can have in the country a reverse osmosis filter and get the same result. By the project from 1985 they made a huge column, all wrapped by electronics. In order to make it work, water had to be cleaned in advance and, moreover, regularly update used resin in the column — firstly washed with acid, alkali and then, finally, water — to normalize the pH. But because the electronics by the time all had went wrong, there was a special man, who on Friday evening mixed acid and alkali in a large tub and simply washed this column with no automatic control. About two weeks after I started working one tenant came to me, shouting: «What a mess’s going on! The tap water is 11 pH!» Even then I realized that hard situation is.

— And was that the end of all problems?

— All the processes in the building are based on the water — steam sterilizes fermenters, it heats, and then cools again with water Celsius. And when containers, which have the size of several cubic meters and require cooling, need a lot of water. Needless to say that the cooler didn’t worked. In the summer of 96th water was being cooled uncomplicatedly — using fire hoses, which is thrown on the roof, just opening its faucet.

— But this is vicious circle, isn’t it? To have money we need people. To have people we need money. In addition, all equipment is falling apart. There is a way out?

— As you can see, yes, there is. Moreover, we found out only by ourselves: again, help from the state was not offered. I had to decide to take any job. Even if it had no relation to bioorganic chemistry and pharmacology. For example, plant «Ochakovo» needed food concentrates — lemon, orange, tangerine. From it we received underworking: during summer of 1996 scientists were peeling lemons. And then alcohol «Royal» barrels was brought quite officially, under the contract.

At the Experimental biotechnology plant

But in 2000 our Institute and the Moscow Government signed an agreement on cooperation in the field of genetically engineered human insulin. What does it represent? See, Luzhkov gave us a loan of 120 million, which should have been started to give back after two years and fully paid off with another two in 2004. He gave the credit to the condition that we will produce 300 thousand flasks per year and sell them for 3.8 dollar apiece.

— Apparently, these were impossible conditions, weren’t they?

— Well, nothing is impossible, of course. Eyes fear but hands do. But judge by yourself: imported drugs worth 6.2 dollars per flask. We had had to give back the credit in almost record time! And though the production started practically from scratch!

Fermentation plant was installed in 1989 and has never worked — no aims for it, no separation and purification plants, no aseptic production of pharmaceutical forms, no certified laboratory quality control. GMP (standard «Good Manufacturing Practice» — system of rules, regulations and guidelines for the production of medicines, medical devices, diagnostic products and other purposes —  Ed. note)? We even never had heard about this «beast».

— However times have changed. What are the realities of Director of production?

— I know gossips that we are making disgraces in the Institute and we are heavily in debt. Nonsense! We were the first who established the production of biopharmaceutical products in Russia. Four or five years ago, there was nothing like this in our country! Now EBP partially or fully realized production of not only insulin but also of growth hormone and interferon beta, filgrastim (with «Masterclone» and «Pharmstandard»), Licopid (with «Peptek»). In terms of Technopark, «Kombioteh» produces a recombinant vaccine against hepatitis B.

Last year we won the VIP-grant for the creation of analog rituximab technology — recombinant histone to treat cancer. Now we generate a product for clinical studies.

About relations with the Moscow Government: they are more than friendly. The arbitral tribunal last year allowed us to reduce and fix the amount of debt. And now we establish a joint stock company which will be owned by Moscow. This company will release Insuran in cartridges for injections pens, brought from IBCh license, intellectual property and know-how, assuming the debts of the Institute.

Briefly formulate financial results in 2009, it turns out that we have earned 106 million rubles, paying the «piggy bank» of the Institute about 33 million. Of 72 employees we have only 50 at the budget rate, and output per person on average more than one and a half million rubles. In addition our staff have published over 30 scientific articles, including in foreign journals. Since 2009, we published the first in the country research and production «Biopharmaceutical magazine» — recently 6th number was published. In May we’re waiting for the second symposium from science to industry» in Yerevan.

And, of course, our pride — with MSAFCT we have been preparing master-engineers with a degree in «Biopharmaceuticals technology». And lectures delivers, and degree works they are going to do. The guys are amazing, they simply absorb knowledge with their bright eyes.