Scientific projects of postgraduate students of the Institute of Bioorganic Chemistry of Russian Academy of Sciences have become the winners of the program of Skolkovo Institute of Science and Technology to support young scientists in systems biology. The researchers will receive scholarship money to study two issues: responses of T-cell immunity to a live vaccine against yellow fever in genetically identical twins, as well as search and analysis of genetic target gene, which is responsible for brain development and regeneration of the body appendages in vertebrates.

Anastasiya Ivanova and Mikhail Pogorelyy, postgraduate students of the Institute of Bioorganic Chemistry (IBCh), among the five winners of the Young Scientists Support Program for Systems Biology. It was initiated by the Skolkovo Institute of Science and Technology. The winners in three years will receive funding to cover the costs for their research projects.

Anastasiya Ivanova looks for and analyzes genetic target of Ag1 gene which is found in the Laboratory of the molecular basis of embryonic Institute of Bioorganic Chemistry was lost during the evolution of amniotes, ie, reptiles, birds and mammals, including humans. Now, this gene regulates the development of the forebrain and regeneration of large body appendages in the lower vertebrates, such as fish and amphibians.

– The interesting thing was that in contrast to the lower, amniotes have a more developed and the forebrain reduced, and sometimes a lack of the ability to regenerate body parts, – Anastasiya says. – Therefore, it has been suggested that the disappearance of certain genes, the restructuring of certain signaling pathways could lead to such a major evolutionary changes, like increased growth of the dorsal cortex of amniotes and their loss of the ability to regenerate. We will use the transcriptome sequencing method to get a complete list of all genetic targets Ag1 gene in the process of brain development and regeneration that will reveal the signaling pathways involved in both processes and conduct comparative analysis. The results will be important not only in terms of molecular and evolutionary biology, but also for regenerative medicine. 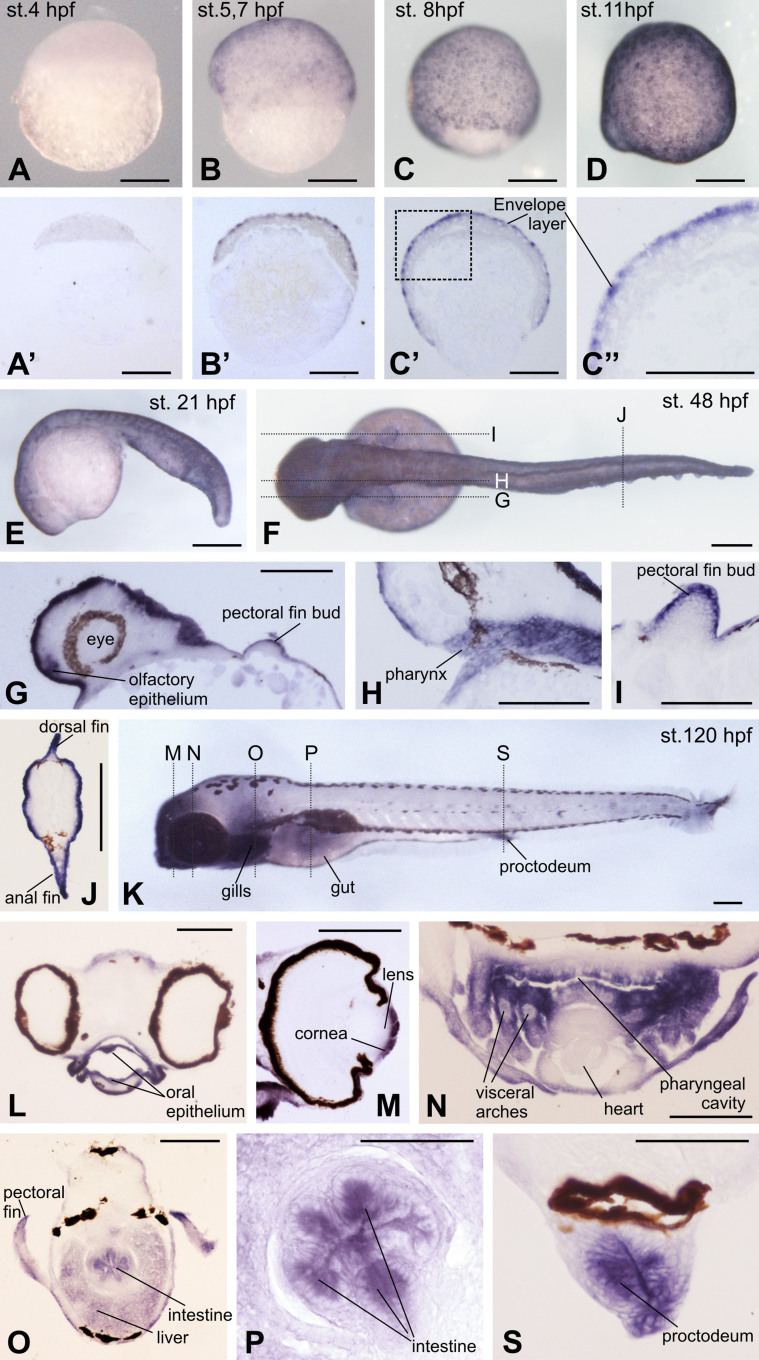 Spatial expression pattern of DAg1 in Danio rerio embryos as revealed by in situ hybridization..

Anastasiya hopes that an understanding of the mechanisms of regeneration in lower vertebrates will allow to understand the cause of its loss in the amniotes. And it means to determine whether it is possible through the activation of certain signaling cascades include "dormant" mechanisms of regeneration and activate the dedifferentiation of cells in the adult human, allowing him to regain lost body parts, whether limb or internal organs.

Mikhail Pogorelyy will develop the project "high-performance sequencing TCR repertoire of monozygotic twins with immunization against yellow fever". This approach can be used to develop new vaccines.

– We want to keep track of real-time response of T-cell immunity to a live vaccine against yellow fever in genetically identical twins, – Mikhail says. – In fact, we will get a model of how the immune system will react to the acute infection. We will do this by using the NGS-sequencing repertoire of T-cell receptors of these people.

Previously, researchers have shown that twins have a similar machinery, which collects their T-cell receptors. Later, they determined that the twins share of T-lymphocytes in the womb, so part of their immune system is identical. Now, Michael wants to understand how it will be substantially similar to the model of a real sharp, passing quickly infection. The study will be known whether the twins’ immune response similar, and whether they meet the clones, they exchanged before the birth?

– Systems Biology is a biology of the future, it will help scientists to consolidate large volumes of disparate data collected over the past decade, and advance to the management of biological processes and the fight against many diseases, – Constantin Severinov, member of the Scientific Council of the Program, said to the portal "Science and Technology". – Traditionally in Russia there is a very strong math, so we have an opportunity to make a significant contribution to the development of systems biology.