Researchers at the Institute of Bioorganic Chemistry of the Russian Academy of Sciences, together with colleagues from the A.N. Belozersky Institute Of Physico-Chemical Biology of the  Lomonosov Moscow State University and the P.N. Lebedev Physical Institute of the Russian Academy of Sciences, have proposed a new mechanism for the dynamic self-organization of spatial structures in embryogenesis. Using mathematical modeling methods, the researchers have demonstrated that this self-organization may be due to a significant difference in the diffusion of morphogen proteins, which occurs due to differently binding morphogens in the extracellular matrix. The results of this monumental research, which were published in the PLOS ONE Journal, create the preconditions for the development of other models that describe the appearance of the variety of forms in the early stages of development of an organism.

In the early stages of development, the embryo organs are composed of a plurality of identical cells, which then become complex spatial structures, and their sizes are much larger than the cells themselves. How does this happen? It is believed that such structures are formed as a result of dynamic self-organization, a process in which morphogen proteins secreted by cells and propagated over long distances play an important role. One of the conditions necessary for self-organization is finding a system located in a state of acute disequilibrium, that is, under conditions of strong dissipation (scattering) of energy. Therefore, such structures formed during self-organization are often referred to as "dissipative".

“The increasing complexity of the embryo can be simplistically reduced to its laws on territorial division, consisting of differently differentiated cells, i.e. those that have different functions, play different roles in the body. In many cases, instructions to this orderly spatial differentiation of embryonic tissue cells are obtained due to the formation of dissipative structures. They usually appear as concentration gradients of morphogen proteins. As a result, embryo cells at different distances along this gradient are exposed to different morphogen concentrations, for example, hormones, and thus receive signals to differentiate into different directions,” explains Andrey Zaraisky, Head of the Laboratory of Molecular Bases of Embryogenesis of the Institute of Bioorganic Chemistry of the Shemyakin&Ovchinnikov Institute of Bioorganic Chemistry of the Russian Academy of Sciences.

It is known that complex structures arise when there are at least two diffusing and nonlinearly interacting morphogens with sharply differing diffusion coefficients, i.e. the rate of penetration of one substance to another. However, real morphogen-proteins have similar size and approximately the same mobility in aqueous solutions.

“What exactly leads to the achievement of the difference between the diffusion rates of the morphogens, which is necessary for the self-organization of dissipative structures? For a long time, this question remained open ended,” narrates Alexey Nesterenko, the lead researcher from the Laboratory of Molecular Bases of Embryogenesis of the Institute of Bioorganic Chemistry of the Shemyakin&Ovchinnikov Institute of Bioorganic Chemistry of the Russian Academy of Sciences and the A.N. Belozersky Institute Of Physico-Chemical Biology of the  Lomonosov Moscow State University. “Previously, we have shown that in the diffusion process in the intercellular space, different morphogens may bind with varying force with proteoglycans, specific proteins of the extracellular matrix (substance).” 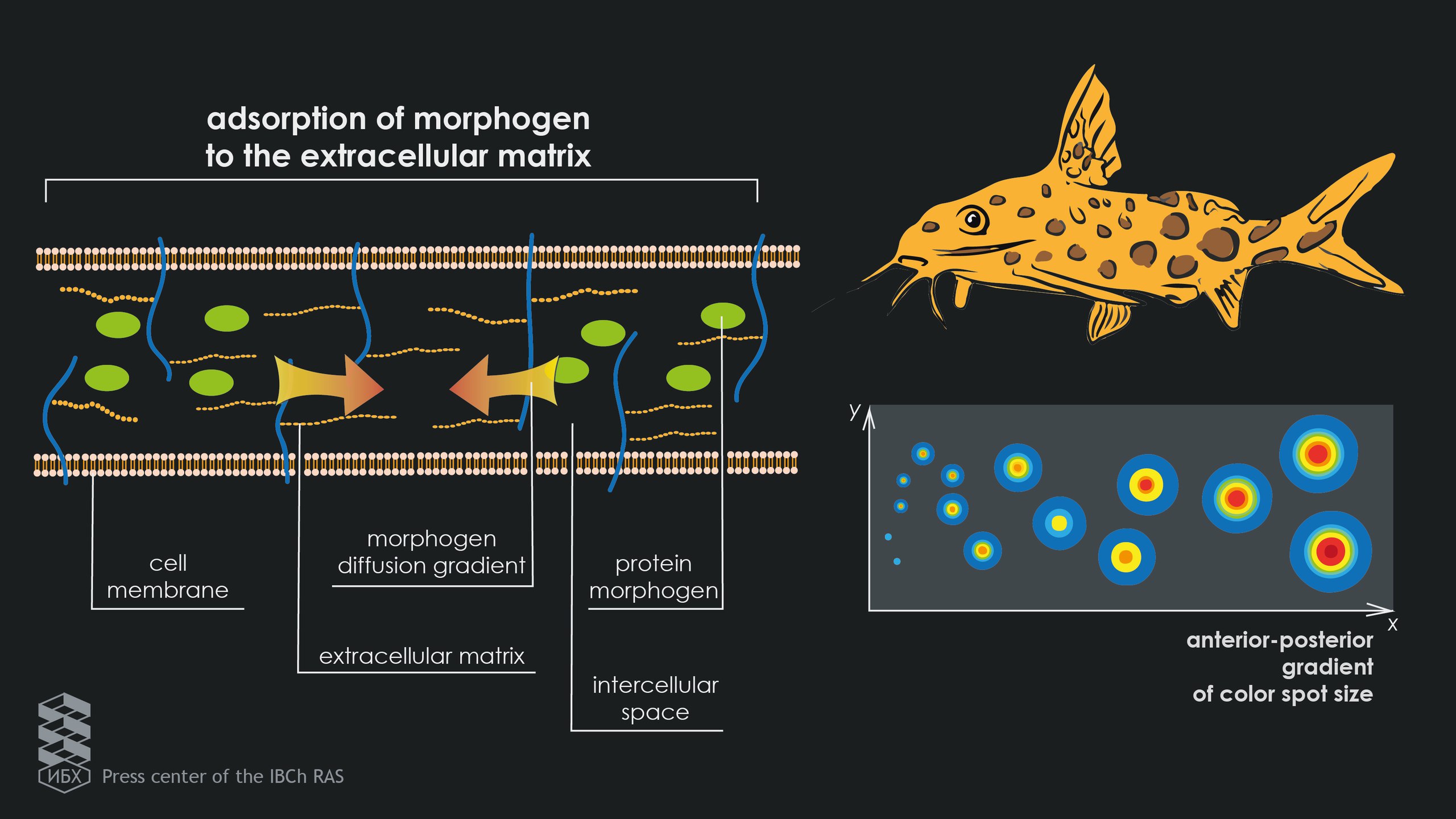 “We have applied a mathematical model to demonstrate that a system comprising of two uniformly-mobile morphogens, adding conditions of adsorption of one of them on the extracellular matrix certainly makes it possible to obtain the spatial structure of the mechanism of dynamic self-organization,” explains Maxim Kuznetsov, one of the researchers from the P.N. Lebedev Physical Institute of the Russian Academy of Sciences.

The authors looked at various examples in which new model can be applied, including in cuckoo-catfish coloring.

“This fish of the mochokid catfish family has a yellow coloring, with numerous black spots scattered throughout its body. The model that we have developed provides an adequate explanation for the formation and regular decrease in the number of spots of its color in the tail-to-head direction,” says Daria Korotkova, one of the researchers, a student at the Lomonosov Moscow State University who is completing her graduate work at the Laboratory of Molecular Bases of Embryogenesis.

The developed approach creates the preconditions for the development of mathematical models for increasingly diverse morphological forms in embryogenesis. The researchers are already currently working on its further experimental confirmation.