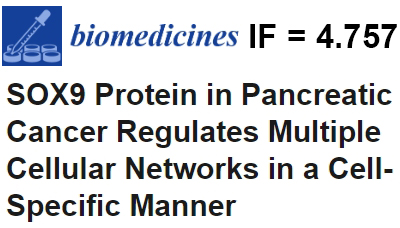 In the research authors studied six pancreatic cancer cell lines, which displayed varying levels of differentiation and a range of oncogenic mutations. Scientists chose the method of downregulation of SOX9 expression via siRNA transfection as the main method for investigating the functional role of the SOX9 factor in pancreatic cancer cells. Authors discovered that the downregulation of SOX9 expression in the cell lines leads to cell-line-specific changes in the expression levels of epithelial and mesenchymal protein markers (CDH1, CDH3, KRT7, KRT18, KRT19, ZO-1, MUC1, CDH2, VIM, SNAI1 and SNAI2) Additionally, the downregulation of SOX9 expression had a specific effect on the expression of pancreatic developmental master genes (HNF1A, GATA-4, GATA-6 and FOXA2). SOX9 downregulation had the greatest effect on the expression levels of the protein regulators of cell proliferation (CCND3, CDKN1A, CDKN1B and BIRC5). In three of the four cell lines studied, the transfection of siSOX9 led to a significant decrease in proliferative activity and to the activation of proapoptotic caspases in transfected cells. The acquired results demonstrate that the SOX9 protein exerts its multiple functions as a pleiotropic regulator of differentiation and a potential promoter of tumor growth in a cell-specific manner in pancreatic cancer cells. The research was performed at the Laboratory of human genes structure and functions and the Group of gene immuno-oncotherapy of the IBCh RAS and was published in Biomedicines journal. 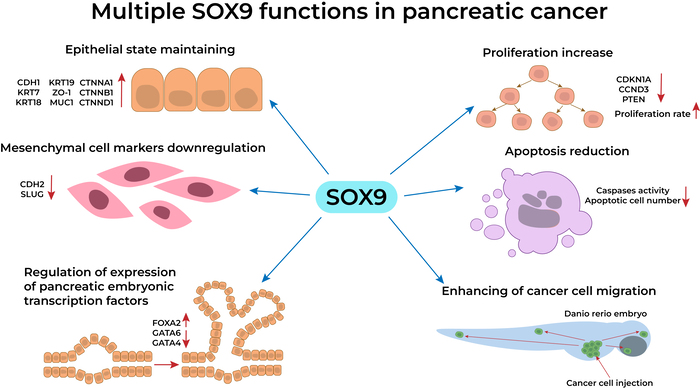