Study of aging of contrast nanoparticles for MRI

A group of scientists from the Laboratory of Molecular Immunology of the IBCh RAS, GPI RAS and a several other scientific Institutes investigated biotransformation of magnetic nanoparticles in the body and the effect of this process both on the metabolism of the iron and on reducing the contrast properties of nanoparticles during imaging. For a long time, it remained unclear what happens in the long term with nanoparticle contrasts for MRI after their distribution in tissues. In addition, magnetic particle biodegradation is accompanied by abundant release of iron ions, which can cause toxic effects. A recent study published in the high-ranking Journal of Nanobiotechnology clarified these issues. 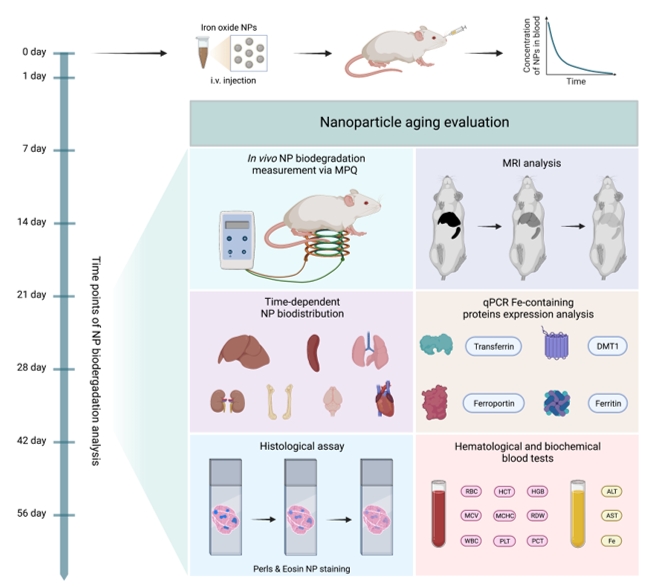 Magnetic nanoparticles (MP) shifted the paradigm of MRI imaging, giving start to overwhelming research developments over the three decades. They are FDA-approved for treatment of iron-deficient anemia. As such, investigating the long-term fate of nanoparticles in the organism, their participation in generation of macromolecular iron containing proteins and discovering new mechanisms of nanoparticle toxicity is of great interest for the clinical and scientific society.

In presented work, the scientists presented the study of the complete lifecycle of magnetic particles from their intravenous administration in vivo to degradation and show the involvement of a range of proteins in the magnetic particle metabolism.

Main features of the study can be briefly summarized as follows:

This study provides a roadmap for an efficient identification of MP catabolism pathways using several complementary state-of-the-art techniques. The developed methodology for the multidisciplinary study of MP degradation from the macroscopic to the cellular level provides an important information about the processes of nanoparticle biotransformation in the body. The expansion of the scope of such approaches will facilitate progress in the development of a wide range of biodegradable materials and drug nanocarriers.

“We believe that our study will attract both researchers and clinicians, because the obtained data can be applied to assess the biodegradation and biosafety of a large variety of magnetic nanoparticles that are currently widely used both in clinical practice and in scientific research.” – said Alexey Yaremenko, first author of the article and PhD student of the Laboratory of Molecular Immunology of the IBCh RAS.