From 28th of September to 2nd of October 2009 IBCh RAS (Moscow) and its Branch (Pushchino, Moscow region) hosted the International Scientific Conference on bioorganic chemistry, biotechnology and bionanotechnology on 75th anniversary of Academician Yu.A. Ovchinnikov.

Conference was opened by vice-president of RAS, Academician A. Grigoriev, who noticed the huge contribution of Academician Yuri Ovchinnikov in the development of Russian scientific researches in the field of bioorganic chemistry and biotechnology. On behalf of the President of the Russian Academy of Sciences Academician Yu. Osipov, A. Grigoriev congratulated the participants of the conference on its opening and wished it a successful and fruitful work. In his welcoming address the President of RAS was said that the conference is held in the IBCh RAS — a favorite brainchild of the Yu. Ovchinnikov and a major research institution in the field of life sciences in our country, the world-recognized center of biological science. 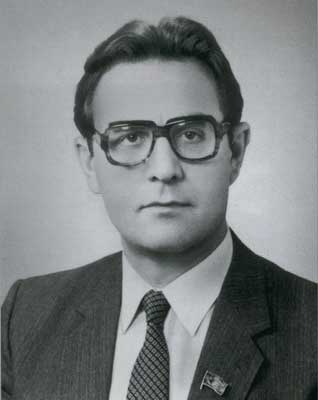 Russian eminent chemist and biochemist, the founder of the national bioorganic chemistry and biotechnology, the largest specialist in the field of membrane biology and chemistry of protein-peptide substances. He was a member of USSR AS and the All-Union Academy of Agricultural Sciences of the Soviet Union. Yu. Ovchinnikov was vice-President of USSR AS and the director of the Institute of bioorganic biochemistry of USSR AS. He is an author of more than 500 scientific studies, which have received worldwide recognition. A honorary foreign member of AS of many countries. His work was marked with state awards and prizes.

Yu. Ovchinnikov paid a great attention to the development of international relations of USSR scholars. In perfect owning several foreign languages, Yu. Ovchinnikov brilliantly presented his research at international forums, often visited leading research centers in different parts of the world, where he made a lot of scientific contacts and invited eminent foreign scientists to our country to give lectures. He organized numerous international conferences and bilateral workshops with scientists of Spain, Germany, USA, France, Sweden, Switzerland and other countries in various fields of physical and chemical biology and biotechnology. To participate in these symposia, he is widely attracted young scientists, and this fact contributed to the rapid progress of biological and chemical research in our country.

The director of the IBCh RAS Academician V. Ivanov read the message of the Minister of education and science A. Fursenko for organizers and participants of the conference. It was said that the conference is not only a tribute to the memory of an outstanding Russian scientist, Academician Yu. Ovchinnikov, but also it’s an evidence of growing international cooperation and recognition of Russian scientists’ contribution in the development of such a high-tech field of knowledge as biotechnology and bionanotechnology.

In the welcome letter from the Deputy Minister of education and science A. Hlunov accentuated that the conference will make a significant contribution to the goals of developing effective drugs and test-systems for medicine, which have a vital importance for humanity. Moreover the conference also is a worthy continuation of the great scientist heritage.

In his introductory report, Academician V. Ivanov said about the creative development of Yu. Ovchinnikov, his most significant scientific achievements.

The head of Scientific-educational Center of the IBCh RAS T. Ovchinnikova, widow of Academician Yu. Ovchinnikov, read congratulatory telegrams of Nobel Prize winners J. Alferov (Russia), G. Blobel (USA) and J.-M. Lehn (France), President of the Foundation for a Culture of Peace, former general director of UNESCO and the Minister of education and science of Spain F. Mayor.

A victory in the second age category of the Competition (doctors and candidates of science, young scientists without a degree at the age of 27 to 35 years) is won by:

The first prize winners were awarded with commemorative medals in memory of Academician Yu. Ovchinnikov. Besides there were some special awards: for the youngest participant in the competition Yu. Sukhanova from school № 1306, Moscow; the youngest PhD N. Vorobyeva, junior researcher of the IGB RAG; youngest doctor of science O. Guly, leading scientist of IBPPM RAS, Saratov. Special prize for best poster design was presented to D. Melnikova, student of MUCTR. All participants of the contest were awarded with honorary diplomas.

The conference is supported by RAS, Federal Agency for Science and Innovation of Ministry of education and science, RFBR, the Yu.A. Ovchinnikov Society of biotechnologists of Russia. Conference Program and electronic versions of theses from plenary reports and poster presentations, theses from works of young scientists who took part in the Competition are available at our web-site.