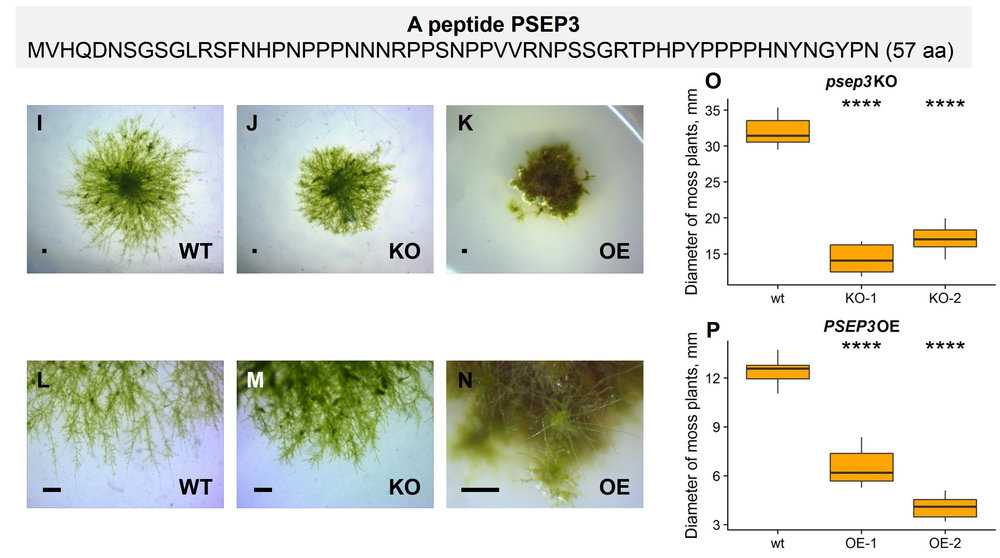 Genomes contain millions of short (<100 codons) open reading frames (sORFs), which are usually dismissed during gene annotation. Nevertheless, peptides encoded by such sORFs can play important biological roles, and their impact on cellular processes has long been underestimated. Here, we analyzed approximately 70,000 transcribed sORFs in the model plant Physcomitrella patens (moss). Several distinct classes of sORFs that differ in terms of their position on transcripts and the level of evolutionary conservation are present in the moss genome. Over 5000 sORFs were conserved in at least one of 10 plant species examined. Mass spectrometry analysis of proteomic and peptidomic data sets suggested that tens of sORFs located on distinct parts of mRNAs and long noncoding RNAs (lncRNAs) are translated, including conserved sORFs. Translational analysis of the sORFs and main ORFs at a single locus suggested the existence of genes that code for multiple proteins and peptides with tissue-specific expression. Functional analysis of four lncRNA-encoded peptides showed that sORFs-encoded peptides are involved in regulation of growth and differentiation in moss. Knocking out lncRNA-encoded peptides resulted in a decrease of moss growth. In contrast, the overexpression of these peptides resulted in a diverse range of phenotypic effects. Our results thus open new avenues for discovering novel, biologically active peptides in the plant kingdom.

In collaboration with Laboratory of Molecular Bases of Plant Stress Resistance 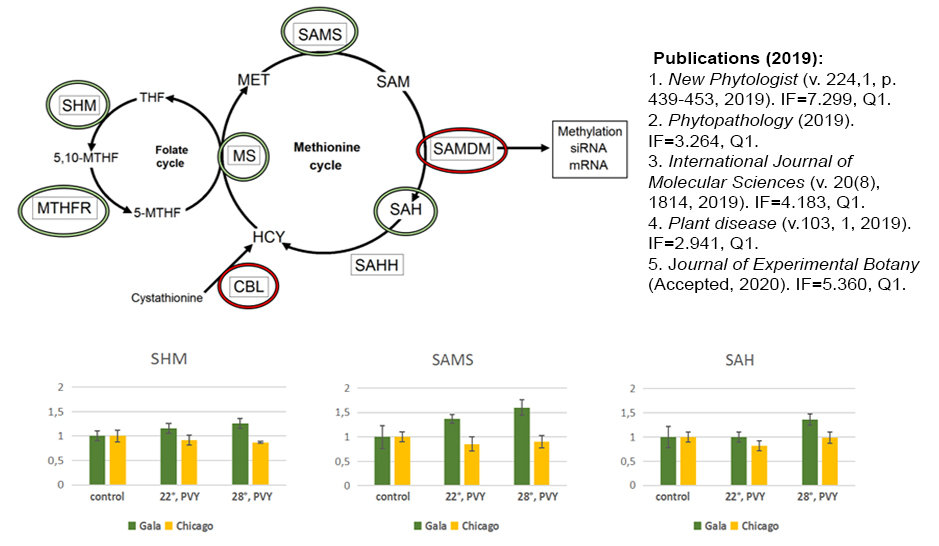 In plants of susceptible cv Chicago, accumulation of five proteins involved in methylation processes is reduced (shown in green), whereas in plants of resistant cv Gala, accumulation of cystathionine beta lyase and SAM-dependent methyltransferase (shown in red), involved in metabolism of  S-adenosyl methionine (methyl-group donor) is significantly increased. We have also analysed expression levels of some methionine cycle proteins using quantitative RT-PCR. Comparison of RT-PCR and proteomic data has demonstrated that decrease in accumulation of methionine cycle proteins in susceptible Chicago plants occurs at the translational rather than transcriptional level. It is suggested that susceptibility to stresses in potato cv Chicago plants may be related to reduced amount of proteins involved in methylation.

In collaboration with Laboratory of Molecular Bases of Plant Stress Resistance 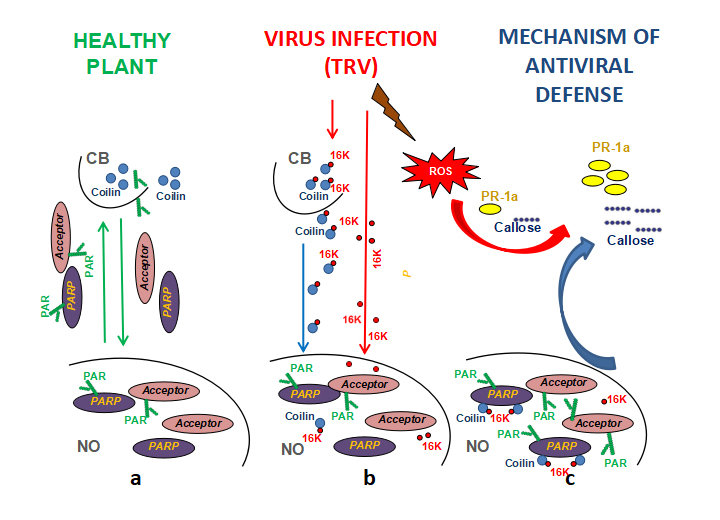 The nucleolus and Cajal bodies (CBs) are sub-nuclear domains with well-known roles in RNA metabolism and RNA-protein assembly. However, they also participate in other important aspects of cell functioning. In collaboration with the James Hutton Institute we have described a previously unrecognised mechanism by which these bodies and their components regulate host defence against pathogen attack. It has been shown that the major proteins of CBs (coilin) and the nucleolus (fibrillarin) interact with poly(ADP-ribose) polymerase (PARP) and modify its function, and that this interaction is modulated by the tobacco rattle virus 16K protein.

Our results reveal that PARP a nuclear protein, modifies the function and subcellular localisation of a variety of nuclear “target” proteins (acceptors) by attaching chains of ADP ribose (PAR) to them. To re-activate these target proteins PARP shuttles them from both the nucleolus (NO) and chromatin to CBs for PAR removal and recycling (Fig 1a). In response to TRV infection plants initiate defence responses as evidenced by the over-accumulation of reactive oxygen species (ROS) and some increase in levels of pathogenesis-related (PR) PR-1a transcripts and callose deposits (markers of antivirus defence response). Upon TRV infection, the 16K protein is produced in the cytoplasm and is targeted to the nucleus (Fig 1b). In the nucleus (CBs and nucleoplasm) the 16K protein interacts with coilin and re-localizes it to the nucleolus, which in turn traps PARP within this sub-nuclear domain, preventing its trafficking from the nucleolus for PAR cleavage and recycling. This leads to over-accumulation of PAR/PARylated proteins and significant enhancement of the defence responses (such as PR-1a gene expression and callose deposition). Callose deposition presumably directly restricts TRV spread to newly emerging leaves (Fig. 1c).