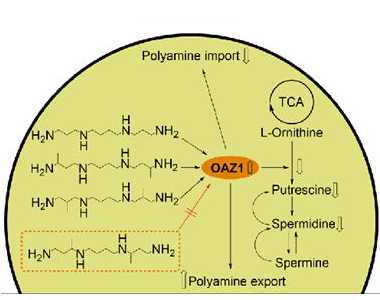 Scientists from IMB, the University of Eastern Finland, together with employees of the Laboratory of molecular design and synthesis of IBCh RAS, study the cellular functions of biogenic polyamines spermin and spermidin involved in the regulation of vital cellular functions including proliferation and differentiation. An original system of C-methylated spermin derivatives was created, whose interaction with polyamine metabolism enzymes can be regulated by moving the methyl group along the spermin backbone. The use of these compounds allows us to study the individual cellular effects of easily interconvertible and partially interchangeable spermin and spermidin, as well as the mechanisms of Antizyme (OAZ1)-mediated downregulation of polyamines - the main mechanism for maintaining polyamine homeostasis in the cell. The work was published in Journal of Medicinal Chemistry.