Department of metabolism and redox biology

New mechanism of regulation of the embryonic cells stem status

Laboratory of molecular bases of embryogenesis 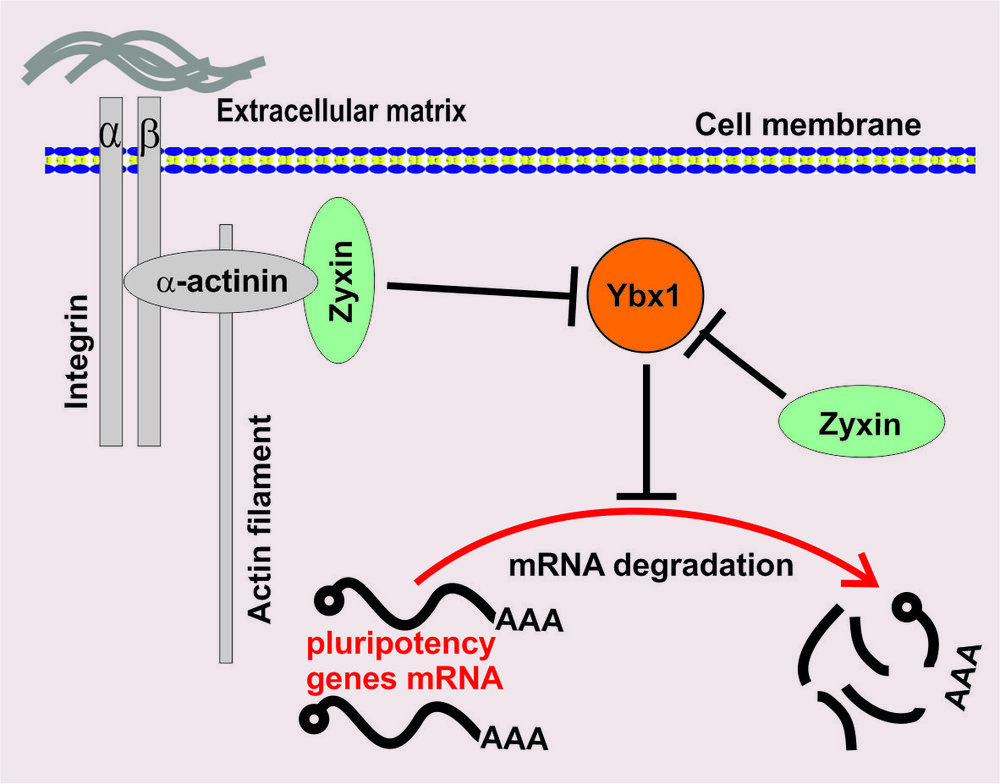 Researchers from the Laboratory of Molecular Bases of Embryogenesis IBCh RAS, in technical cooperation with colleagues from the Department of Metabolism and Redox Biology IBCh RAS, the Laboratory of Genomics and Epigenomics of Vertebrates in the Federal Center "Fundamentals of Biotechnology" RAS, as well as with colleagues from the Cell Motility Group of the Institute of Protein Research RAS, discovered a previously unknown mechanism of the regulation of the activity of genes that determine the pluripotent status of the embryonic stem cells. This mechanism is based on the ability of the cytoskeletal protein Zyxin to displace mRNA of pluripotency genes from complexes with the mRNA-stabilizing protein Ybx1, which accelerates the degradation of these mRNAs. The authors suggest that this mechanism helps to coordinate the processes of morphogenesis and cell differentiation in embryogenesis.

Laboratory of molecular technologies,  Group of metabolic bases of pathology 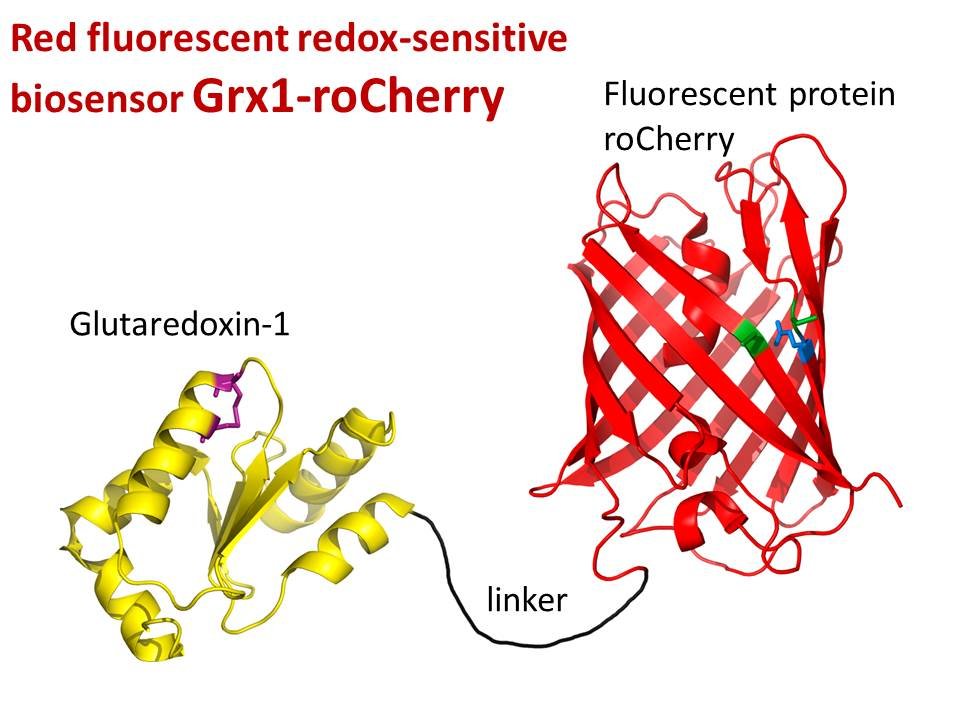 We developed a genetically encoded biosensor for registration the redox state of the glutathione pool (2GSH/GSSG ratio) based on the red fluorescent protein mCherry. The structure of the fluorescent protein contains a pair of redox-active cysteines that are involved in the thiol-disulfide exchange reactions of intracellular systems. The fluorescent signal of the biosensor reflects the redox state of glutathione in the studied system due to the spectral difference between the oxidized and reduced forms of the protein. Human glutaredoxin-1 was added to the structure to improve the kinetic properties of the biosensor. Grx1-roCherry biosensor is a reliable tool for monitoring changes in the 2GSH/GSSG ratio in real time in various biological systems, including a combination with spectrally different versions in a multiparameter imaging mode.

Hydrogen peroxide is formed under the action of many enzymes and performs signaling functions locally. Its diffusion in the cell is limited by the action of antioxidant systems. This contributes to the occurrence of locally elevated concentrations of ROS, sufficient for the implementation of regulatory functions, while not causing damage. At the moment, the contribution of each antioxidant system to this process was not completely clear. Visualization of the action of antioxidant systems is rather complicated: enzymes that generate hydrogen peroxide have their localization pattern, as well as the main members of antioxidant systems, both patterns are poorly understood.
To solve this problem, the principles of chemogenetics and synthetic biology were used. The enzyme D-amino acid oxidase (DAAO), which performs the oxidative deamination of D-amino acids with the formation of hydrogen peroxide as a by-product, has already been successfully used for the controlled production of H2O2 in various cells types, as well as in vivo. Using a special peptide signal, this enzyme was localized in the cell nucleus, while the HyPer3 biosensor was localized in the mitochondrial matrix. Both compartments maintained their positions in the cell for a time sufficient to visualize the gradient of hydrogen peroxide. This gradient was formed after the activation of DAAO by the addition of a D-amino acid as a result of the action of antioxidant systems that prevented diffusion of the resulting H2O2. Further, using specific inhibitors, it was shown that the thioredoxin pathway plays a key role in limiting the diffusion of hydrogen peroxide in the cytoplasm of HeLa Kyoto cells. Both thioredoxin reductases in the cytoplasm and mitochondria are equally important in this process. The system allows to study the contributions of antioxidant enzymes to the formation of local redox balance in various types of cells, as well as to carry out simple screenings of substances that act on antioxidant systems of cells. 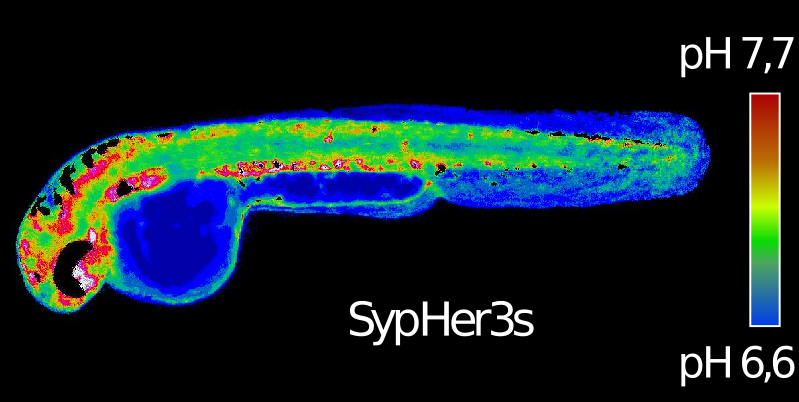 This “molecular pH-meter” allows the quantitative measurement of pH in living systems of various complexity. Using genetic engineering methods, SypHer3s can be delivered into a living cell and, due to its high brightness, can be used in high-resolution microscopy: for example, for accurate observations of fluctuations in acidity in cells or even whole organisms — the article describes a first measurement of pH in various tissues of the zebrafish embryo.

In addition, SypHer3s helped to demonstrate the functional heterogeneity of mitochondria in different compartments of neurons. In the body of a neuron, mitochondria are inactive, while in synapses they begin to actively pump out protons from the matrix creating an electrochemical gradient necessary for the synthesis of ATP. It is convenient to monitor these processes using the pH probe directed to the mitochondria. According to Vsevolod Belousov, “it seems that different parts of the neuron get the energy in different ways: the body uses glycolysis, and synapses — oxidative phosphorylation”. 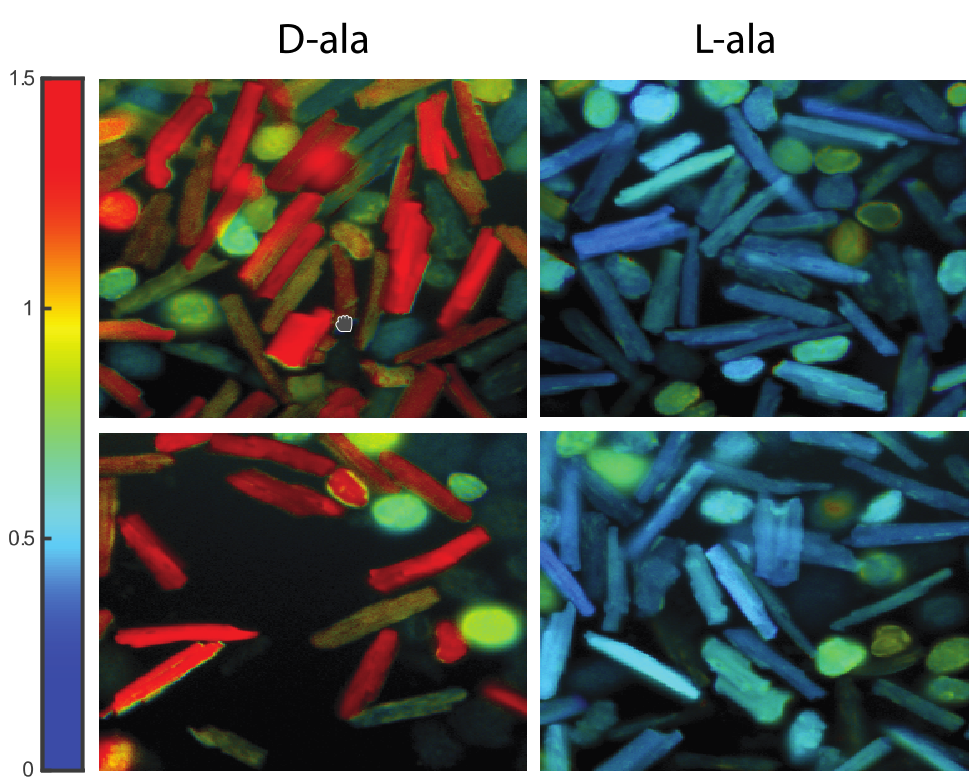 Researchers from Molecular technologies laboratory (IBCh) in collaboration with Harvard medical school scientists developed a novel model of cardiac dysfunction caused by oxidative stress. This model is based on chemogenetics principles — enzymatic production of reactive oxygen species (ROS), stimulated by an external chemical substrate, and visualised by transgenic ROS sensor HyPer. The study is supported by Russian science foundation and published in Nature Communications.