A group of scientists from the Laboratory of the molecular immunology, in collaboration with colleagues from the universities of Tel Aviv and Modena, has shown the possibility of using gold nanorods (50 nm in length and 8 nm in diameter) for photothermal eradication of cancer cells by the near-infrared light. Coating of the nanorods (GNRs) with a HER2-specific DARPin, a module of non-immunoglobulin nature, yields stable DARPin-GNR conjugates capable of selective interaction with the surface of HER2-positive cells. Illumination by the near-infrared light (850 nm) led to almost complete eradication of cancer cells. Molecular dynamic simulations showed that a monolayer of DARPin molecules is formed on the surface of the nanorod. Conjugation with the nanorod does not involve the protein's domain responsible for specific binding to HER2. Our results provide the possibility of phototherapy tumors and metastases of deep tissues. The research was supported by the RSF grant No. 19-14-00112 and the results of the work were published in the journal ACS Applied Materials Interfaces. Scientists from the University of Copenhagen, University of Southern Denmark, Memorial Sloan Kettering Cancer Center in New York, USA, Belarusian State University together with the scientist from Laboratory of Bioinformatic methods in Chemistry and Biology, IBCH RAS Kovalchuk S.I. studied the role of PRMT5 protein in cell functioning and its mode of action in leukemia in the model of human acute myeloid leukemia (AML) cells. PRMT5 activity was connected to SRSF1 protein direct regulation through Arg methylation. SRSF1 is an alternative splicing regulator and PRMT5 inhibition changes splicing patterns for a range of essential genes, which leads to AML cell death. The results of the work can provide potential biomarkers for the treatment response to PRMT5 inhibitors. The work was published in Nature Structural and Molecular Biology. Learn more A group of scientists from the Laboratory of Molecular Bases of Embryogenesis, IBCh RAS, together with colleagues from the Laboratory of Mathematical Methods and Models in Bioinformatics, IPPI RAS developed a bioinformatics method that allows one to reveal genes that appear or disappear at a certain stage of evolution. Using this method, a number of genes were found that disappeared in warm-blooded animals, including humans. For further study, one of the found genes was selected that encodes a previously unknown protein. Using the example of this gene, the validity of the hypothesis about the role of disappeared genes in the progressive development of the brain and in the loss of regenerative ability in warm-blooded animals was confirmed. Also this transmembrane protein (c-Answer) is the new FGF and ADP signaling modulator. The results are published in Cell Reports. Learn more A group of researchers from the Laboratory of Functional Genomics and Plant Proteomics of IBCH, together with scientists from the Federal Research and Clinical Center of Physical-Chemical Medicine and Institute of Biomedical Chemistry, describes peptides encoded by sORFs in a model organism, Physcomitrella patens. The results published in international journal Genome Research. The authors identified about 70,000 transcribed short open reading frames located on long non-coding RNAs and various parts of messenger RNAs. Proteomic and peptidomic methods revealed the translation of peptides from several tens of short frames. Analysis of mutant moss lines with knockout and overexpression of some of them located on long non-coding RNAs revealed that the peptides play an important role in the regulation of moss growth and development. The mechanisms of such regulation need further study. The study was supported by the Russian Science Foundation. Learn more 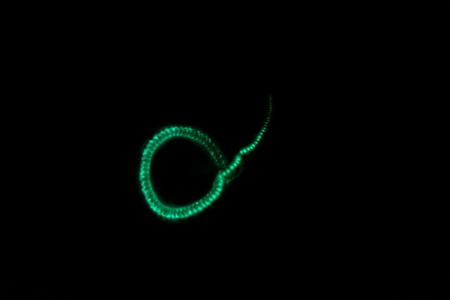 Bioluminescence – a widespread in the natural world process of “cold light” emission by living organisms, is based on an enzyme-dependent biochemical oxidation reaction in which energy is released in the form of light. Out of 40 presumed bioluminescent systems only for nine the structures of substrates - luciferins were elucidated, while a complete description of the luciferin biosynthesis pathway along with the corresponding enzymes was done only for two. A collaborative effort by an international team of scientists led to the discovery of new luciferin from marine polychaetes Odontosyllis undecimdonta. The characterization of three key low-molecular-weight components of Odontosyllis bioluminescence system, presented in an article published in the journal Proceedings of the National Academy of Sciences USA, further enabled the elucidation of the molecular mechanisms of bioluminescence of this organism. Learn more