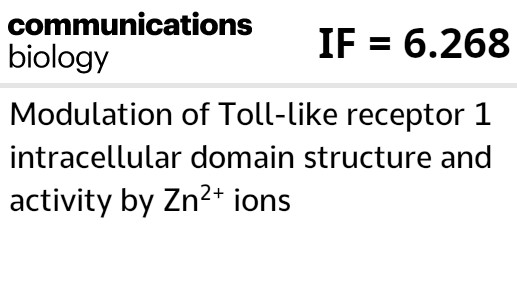 Toll-like receptors are the key players of the innate immune response. Despite the numerous studies and huge amount of data regarding these proteins, the structural basis of their functioning has not yet been clearly elucidated. Scientists from IBCh RAS, together with their colleagues from Moscow Institute of Physics and Technology and Changchun Institute of Applied Chemistry (China) discovered the essential role of zinc in the functioning of Toll-like receptor 1 and proposed possible mechanisms of zinc-mediated receptor activation. The work was funded by the RFBR grant 20-34-70024 and published in Communications Biology. 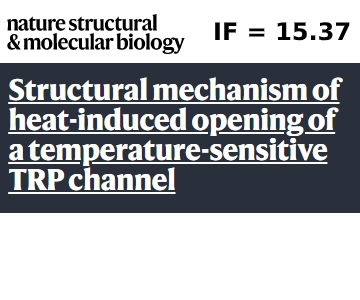 Scientists from the Laboratory of biomolecular modeling of the IBCh RAS, together with colleagues from USA and Czech Republic, have revealed the structural mechanism of heat-induced opening of temperature-sensitive TRP channels. TRPV3 is a polymodal receptor that works as a temperature sensor in skin keratinocytes. For the first time, the team of scientists succeeded in capturing the protein in a closed, sensitized (intermediate), and open state using Cryo-EM. Based on the structural data, the authors proposed the molecular mechanism for the thermal activation of the channel, which represented the so-called "conformational wave" of rearrangements within the protein and its lipid environment. This work was published in the prestigious journal Nature Structural & Molecular Biology and was awarded a cover of the issue. Learn more 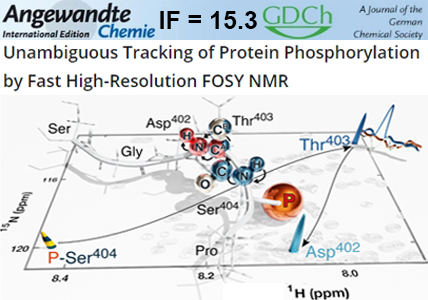 Dysregulation of post-translational modifications (PTMs) like phosphorylation is often involved in disease. NMR may elucidate exact loci and time courses of PTMs at atomic resolution and near-physiological conditions but requires signal assignment to individual atoms. Conventional NMR methods for this base on tedious global signal assignment that may often fail, as for large intrinsically disordered proteins (IDPs). We present a sensitive, robust alternative to rapidly obtain only the local assignment near affected signals, based on FOcused SpectroscopY (FOSY) experiments using selective polarisation transfer (SPT). We prove its efficiency by identifying two phosphorylation sites of glycogen synthase kinase 3 beta (GSK3β) in human Tau40, an IDP of 441 residues, where the extreme spectral dispersion in FOSY revealed unprimed phosphorylation also of Ser409. FOSY may broadly benefit NMR studies of PTMs and other hotspots in IDPs, including sites involved in molecular interactions. 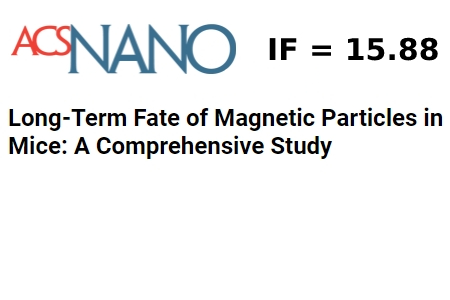 Investigation of long-term fate of magnetic nanoparticles in mice

Scientists from Laboratory of molecular immunology of IBCh RAS performed first broad comprehensive study of factors which influence degradation rate of magnetic particles in mammals. For this aim magnetic spectral approach was developed, allowing non-invasive and quantitative measurement of magnetic particles in mice without influence of biogenic iron. Researchers studied the key factors that determine the degradation rate of nanoparticles: particle dose, size, zeta potential, type of polymer coating and internal architecture of nanoagents. The revealed deeper insights into the particle degradation in vivo may facilitate rational design of theranostic nanoparticles with predictable long-term fate in vivo. The work was published in ACS Nano. 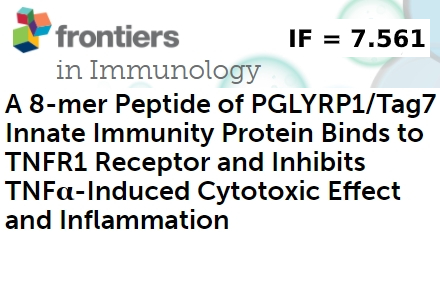 In the laboratory of molecular immunogenetics of cancer IGB RAS was demonstrated that the PGLYRP1/Tag7 innate immunity protein can be regarded as an inhibitor of TNFα cytotoxic activity via the interaction with its TNF receptor 1 (TNFR1). A C-terminal peptide fragment 17.1 of the molecule is responsible for this function. In this study was demonstrated that the minimal 8-mer region of this peptide (hereinafter – 17.1A) is capable to bind to TNFR1. As a result of such interaction, the cytotoxic signals induced by this receptor are blocked. In the Nursery for laboratory animals BIBCh RAS was demonstrates that this peptide an anti-inflammatory activity in vivo in the complete Freund’s adjuvant (CFA)-induced arthritis model in laboratory mice. Peptide 17.1A is capable to reduce periarticular inflammation, inhibit the development of synovitis and exhibit a protective effect on cartilage and bone tissues. The work was published in Frontiers in Immunology.