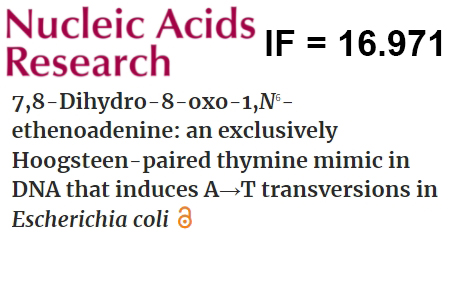 Scientists from the group of molecular tools for living system studies and laboratory of molecular diagnostics (IBCH) together with the colleagues from Skoltech, the Federal Research Center for Physical and Chemical Medicine, Massachusetts Institute of Technology (USA) and Instituto de Química-Física Rocasolano (Spain) has developed a DNA modification, 7,8-dihydro-8-oxo-1,N6-ethenoadenine (oxo-ϵA), a non-natural synthetic base that combines structural features of two naturally occurring DNA lesions (7,8-dihydro-8-oxoadenine and 1,N6-ethenoadenine). The ability of oxo-ϵA to mimic the natural base thymine and regulate duplex stability, as well as its strong fluorescence and invisibility to enzymatic repair systems in vivo, are properties that may find application in the development of nucleic acid-based molecular tools and therapeutics. The work was published in Nucleic Acids Research. 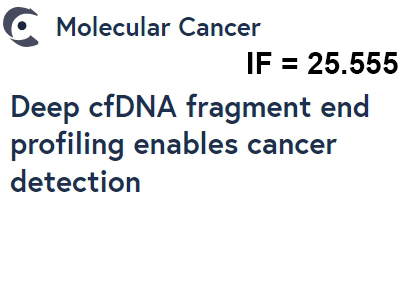 Scientists from the Department of genomics of adaptive immunity of the IBCH RAS together with colleagues from the Pirogov Russian National Research Medical University, N.N. Blokhin Russian Cancer Research Center and Federal Center for Brain and Neurotechnology developed a method for detecting tumors at an early stage in the human body by the structural features of cell-free DNA (сfDNA) ends. The researchers studied the ends of the сfDNA fragments in specific genomic regions at high resolution, and based on their sequences and position in the genome, were able to distinguish between samples from healthy donors and cancer patients in a group of 175 individuals. The developed method for cfDNA ends profiling makes it possible to detect colorectal cancer and kidney cancer using a blood plasma sample at the early stages of the disease. The study was published in Molecular Cancer. 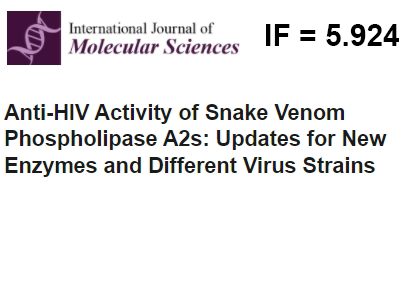 Since the beginning of HIV epidemic, lasting more than 30 years, the main goal of scientists was to develop effective methods for the prevention and treatment of HIV infection, including the search for new compounds with high activity against HIV. Studies carried out by the staff of the Department of Molecular Neuroimmune Signaling of the Institute of Bioorganic Chemistry of the Russian Academy of Sciences and the Gamaleya National Research Center for Epidemiology and Microbiology showed that phospholipases A2 (PLA2) from snake venom have a pronounced anti-HIV effect. The results are published in the International Journal of Molecular Sciences. Learn more 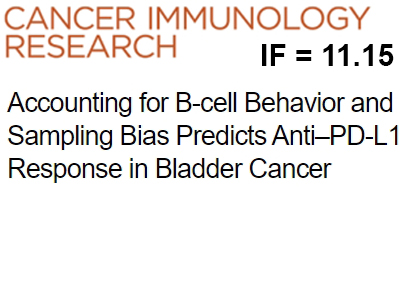 Tumor-infiltrating B-cells play important roles in tumor microenvironmet. Scientists from the Genomics of adaptive immunity department IBCh RAS demonstarted that high IgG1/IgA ratio is an important prognostic indicator for several subtypes of bladder cancer, in which it is also associated with the prominence of a cytotoxic gene signature. To achieve better prognostic and predictive value, authors normalized cytotoxic signature against the extent of immune cell infiltration. Developed PRIMUS model which integrated the normalized cytotoxic, as well as B- and NK-cell signatures, allowed highly accurate prediction of response to anti-PD-L1 immunotherapy. The work is published in Cancer Immunology Research. 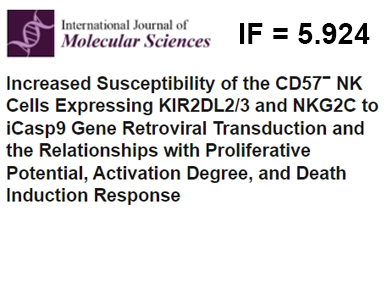 Cell therapy based on genetically modified NK cells is a promising strategy for cancer treatment, but the heterogeneity of NK cells limits the possibilities of this approach. The team from the Laboratory of Cell Interactions IBCh RAS demonstrated differences of NK cell subsets in susceptibility to retroviral transduction of the inducible caspase 9 (iCasp9) gene, the insertion of which can allow timely and rapid triggering of iCasp9-NK cell apoptosis with the addition of a special inductor in case of their excessive hyperactivity. The highest transduction efficiency was shown for the CD57–KIR2DL2/3+NKG2C+ NK cell subset, which was distinguished by an increased proliferative potential and an increased expression level of the HLA-DR activation marker. At the same time, among the iCasp9 populations, KIR2DL2/3+ NK cells responded most weakly to the apoptosis induction. The work is published in the International Journal of Molecular Sciences.