Embryos of many organisms are able to maintain the invariance of their structure, regardless of size – the so-called phenomenon of embryonic scaling. For example, embryos of sea urchin or frog, which have developed from individual cells isolated shortly after the beginning of egg cleavage, self-regulate their structure so that they appear as smaller copies of normal ones. Researchers at the Laboratory of Molecular Bases of Embryogenesis at the IBCH RAS have proposed a general approach to the study of the mechanisms of embryonic scaling. They heuristically postulated and then mathematically proved the existence of special genes, named scalers, the expression of which depends on the embryo size, developed a method for targeted search of such genes, and, as proof of principle, disclose the mechanism by means of which one of the found scalers, mmp3, regulates patterning of Xenopus laevis embryo in a size-dependent manner. 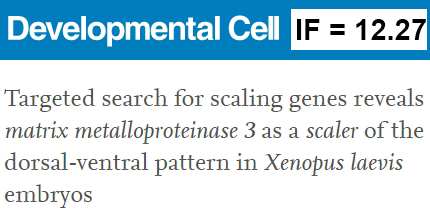 The problem of the amazing ability of many animal embryos to regulate their structure in proportion to size, the so-called phenomenon of embryonic scaling, is one of the most important, but poorly studied in biology. In the scientific literature, this phenomenon was first described by the German embryologist and philosopher Hans Driesch more than 120 years ago. In experiments on embryos of the sea urchin, Driesch was surprised to find that from individual cells isolated immediately after the first or second division of the cleavage of a fertilized egg, in many cases perfectly correct, but reduced copies of normal embryos developed (Fig. 1A). Subsequently, similar examples of scaling have been described by different authors on the embryos of many other animals (Fig. 1B and C). It has now become clear that this phenomenon, which has fascinated researchers for 100 years, is the most striking manifestation of the fundamental feature of living organisms to use non-equilibrium self-organization on a systematic basis for their large-scale structuring. Despite the fact that in some cases specific molecular mechanisms of embryonic scaling have been established, a general solution to this fundamental problem, lying at the intersection of biology, physics and mathematics, did not exist until hitherto.

In a recently published work, researchers from the Laboratory of Molecular Bases of Embryogenesis at the Institute of Bioorganic Chemistry, Russian Academy of Sciences, proposed such an approach, assuming the existence of scalers, i.e. special genes, the expression of which depends on the size of the embryos (Fig. 1D). The concentrations of proteins encoded by these genes play the role of sensors that regulate the scale of morphogenetic gradients depending on the embryo size. As is known, these diffusion gradients of signaling proteins-morphogens arise by the mechanism of non-equilibrium self-organization and serve for the large-scale patterning of the embryo.

Having analyzed in silico about half a million variants of various mathematical reaction-diffusion models of self-organization of morphogenetic gradients, the authors found that in the case when such a model is able to reproduce the scaling of the gradient when the size of the reactor changes, it always contains a protein, the concentration of which sharply changes. These proteins, which play the role of size sensors and are called scalers by the authors, are necessary for the correct scaling of morphogenetic gradients. Based on the data obtained, a method was developed for the targeted search for genes encoding scalers in real embryos. As a result, in an experimental model of Xenopus laevis embryos, the authors identified genes that indeed dramatically changed their expression in response to changes in embryo size (Fig. 1D). Interestingly, the number of such genes turned out to be extremely small (about twenty). For one of them, the gene for the secreted Metalloproteinase 3 (Mmp3), a previously unknown molecular mechanism was described for the first time, which makes it possible to adjust the scale of gradients of the morphogenic proteins Chordin and Noggin1/2 to the embryo size (Fig. 1D). During early development, it is these gradients that pattern cell territories, which then differentiate into the main rudiments of the embryonic body axis - the nervous system, notochord, somitic mesoderm, and ventral mesoderm (Fig. 1D).

The developed approach can be used in any other cases when it is necessary to study previously unknown mechanisms of embryonic scaling in a variety of model organisms. This work was supported by the Russian Science Foundation grant No. 19-14-00098 and published in the Developmental Cell journal.

Fig. 1. Embryonic scaling and scaling genes that regulate it.

A and B. Larvae of the sea urchin Strongylocentrotus droebachiensis and tadpoles of the frog Xenopus laevis developed from wild-type embryos (left in each photo) and from single cells isolated from 2-cell embryos (right in each photo). C. Polyps of the sea anemone Nematostella vectensis, developed from a wild-type embryo (left) and from a single cell isolated from a 4-cell embryo (right) (photo kindly provided by Fedor Eroshkin). D. A graphical schema summarizing the results of the paper.