Animal venoms are typically rich in neurotoxins that affect ion channels in neural and muscle cell membranes. Knowledge of mechanisms underlying neurotoxin selectivity is not only valuable for basic neuroscience, but may also be applied in bioengineering. A novel method for structure—function analysis that we named “protein surface topography” was used to study scorpion α-neurotoxins targeting voltage-gated sodium channels. As a result, molecular determinants of toxin selectivity were inferred, assisting further rational design of neurotoxin analogues for medicine (neuropharmacology) and agriculture (pest resistance).

Natural venoms are one of the favorite objects of study at M.M. Shemyakin & Yu.A. Ovchinnikov Institute of Bioorganic Chemistry (IBCh). They are abundant in neurotoxins that target neural and muscle ion channels and receptors. These molecules are in the research focus of several laboratories. The Laboratory of neuroreceptors and neuroregulators headed by deputy director Eugene Grishin has been involved in studies of the nervous system for more than 30 years.

Among others, voltage-gated sodium channels (VGSC) play a crucial role in nerve signal propagation. VGSCs are targeted by numerous ligands — from the puffer fish tetrodotoxin to pyrethroid insecticides to anesthetics such as lidocaine and procaine. α-Neurotoxins from scorpion venom impair channel inactivation leading to excessive excitation and eventual prey paralysis and death. Although scorpions capture mostly insects and arachnids, their venom is toxic to mammals as well, and several dozen scorpion species are dangerous to humans: the neurotoxins may paralyze respiratory and heart muscles and cause death.

Scorpion venom contains α-toxins that specifically affect insects and mammals (insect toxins and mammal toxins, respectively). It is noteworthy that insects possess single Para channel, while there are at least nine isoforms in mammals termed Nav1.1—1.9. Molecular mechanism of selective action to either isoform is not only a fundamental neurobiological issue, but also an important challenge to biotechnology and bioengineering. Elucidation of this mechanism may aid rational design of neurotoxin analogues that will high-tune VGSC function in a number of neurological diseases (e.g. epilepsy and myotonia) or be used as insecticides.

Two groups at IBCh have conducted a joint research to address peculiarities of mammal and insect toxins that provide for selective action against certain VGSC isoforms. Results were published in the Journal of Biological Chemistry [1] and consisted of two major parts: 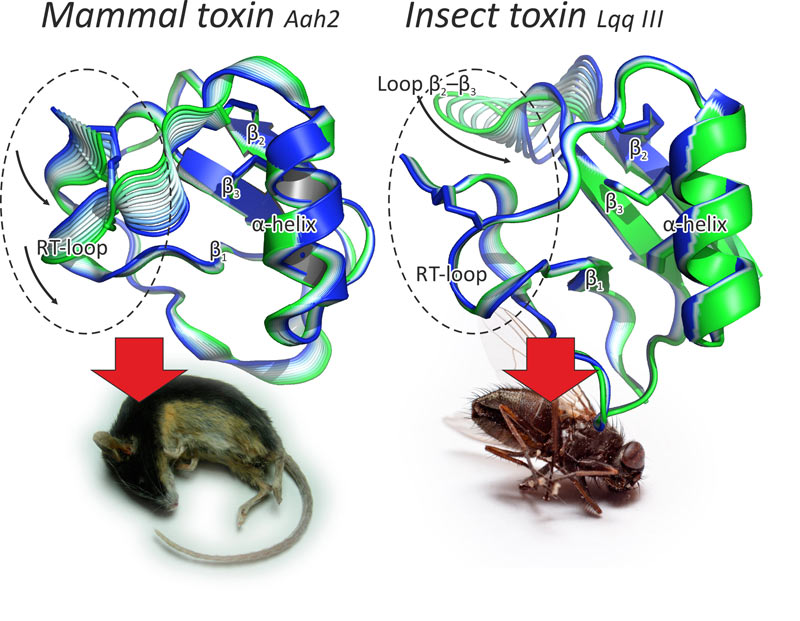 Figure 1. Modular structure of scorpion α-toxins. These toxins are small proteins that consist of a β-sheet and an α-helix stapled with several disulfide bridges. The rigid and evolutionary conserved structure constitutes the core, while two loops and the C-terminus comprise the flexible specificity module (encircled), which differs in mammal (left) and insect toxins (right). Pictured are the results of internal motions MD analysis. Figure modified from [1].

A novel method was developed in the Laboratory of biomolecular modeling, which we named protein surface topography. It helped to uncover the fact that the specificity module is much more hydrophilic in mammal toxins, as compared to insect toxins. The method implies spherical projection of molecular surface-distributed properties, such as electrostatic or hydrophobic potential (Fig. 2), and permits dynamic and group analysis. The “killer feature” of the new method is its ability to assign structure—function relationships in small bioactive peptides. 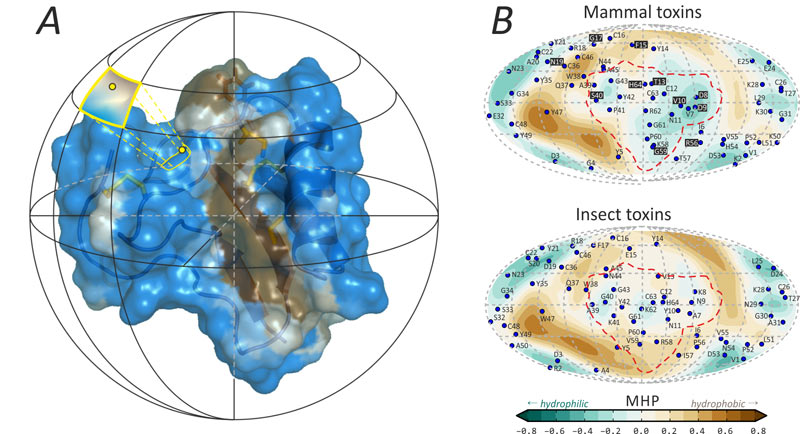 Figure 2. Protein surface topography emphasizes distinctions in specificity modules of mammal and insect toxins. A. The method starts with spherical mapping of molecular hydrophobicity potential, MHP. B. The main result is spherical “maps” of hydrophobic/hydrophilic properties (mammal toxins, top, and insect toxins, bottom). The most profound differences occur in the specificity module that is enclosed with a dashed line. “Functionally variable” residue projections on the mammal toxins map are marked with a black background. Figure modified from [1].

The discovered special toxin features presumably underlie their selective action against VGSCs, which also possess domain structure. We conclude that the toxin modular structure somehow reflects domain organization of the channels. This may be the outcome of the evolutionary arms race that accompanies predator—prey relationships between animals.

Protein surface topography permitted activity prediction of the M9 toxin from Mesobuthus eupeus scorpion: according to the hydrophobicity maps, it should affect both mammal and insect channels. Recombinant toxin was produced and its activity was assayed confirming our assumptions. Of note, the M9 toxin became the first α-toxin for which the 3D-structure was determined, and this was also done in IBCh years ago [2].