Scientific studies of Laboratory of Immunochemistry are devoted to different scientific branches. One scientific block is investigation of the activation and regulation processes of natural immunity. Next block is studying of role of Staphylococcal exotoxins in diseases caused by Staphylococcus aureus, and development of multiparametric diagnostic systems for pathogen detection based on immunochemical methods.

Pathogenic microorganisms and their bacterial toxins

One of the most common pathogens of humans and animals is the Staphylococcus aureus. Staphylococcus rapidly evolves, adapting to changes in the environment. Strains have resistance to diffrent antibiotics in humans and animals. Staphylococcus are able to produce a set of protein and peptide toxins, some of which are stable during heat treatment,  resistant to the action of proteolytic enzymes and at extreme pH values. First of all, these toxins cause human poisoning, and their repeated exposure causes a number of serious complications and leads to the development of autoimmune diseases and allergies. Immunochemical methods of analysis are used for detection toxins in human secrets, food products and the environment. Our Laboratory has the representative panel of mouse monoclonal antibodies to staphylococcal toxins. Based on these antibodies, toxin detection systems have been developed, both using instrumental methods and without special instruments in the field conditions.

In addition, the laboratory interest is directed toward other bacterial toxins produced by the C. botulinum (causative agent of botulism) and B. anthrax (causative agent of anthrax). Monoclonal antibodies were obtained to the most dangerous bacterial toxins of botulinum and anthrax, it contribute to develop some selective and sensitive methods of detection based on the "sandwich" ELISA method.

Mastitis is the most important cause of losses in the production of milk, even in prosperous countries like Holland or Switzerland. In Russia, about 30% of the mastitis causes are associated with staphylococcus. Staphylococcal toxins may be present in milk and products derived from it. The Laboratory studies are devoted to toxicity of staphylococcus in mastitis in the Russian Federation and the production of toxins by toxicogenic strains isolated from patients with mastitis of animals, the immune response of animals to staphylococcal toxins is studied.

Investigation of the natural immunity activation and the role of glucosaminylmuramyl dipeptide (GMDP), the bacteria cell wall fragment, play an important place in the Laboratory research. Using antibodies to the GMDP obtained at the Laboratory, as well as the technology of the peptide phage display, the researchers opened a 15-dimensional peptide – GMDP mimetic, termed the terminal amino acid residues RN peptide. The study of the amino acids role in the recognition of peptide antibodies and the ability to influence the immune system showed the following effects: at the body level - adjuvant at doses 1-3 ng and 1-1.5 mcg; at the cell level – an increase in the expression of NFκB2, regulation of NFκB2 expression as a function of the concentration of YB-1 in the culture medium; at the molecular level – binding to YB-1 with Kd = 4 ∙ 10-9, competition with GMDP for the binding site of YB-1. Based on the investigation data was proposed a model for the activation of natural immunity of the GMDP – RN peptide with the participation of NOD2 and the cold-shock protein Yb-1.

Preparation of Recombinant Antibodies of Animals and Human

Next of the research Laboratory area is costructione of recombinant antibodies, preferably are single-stranded miniantibodies, developing methods for stabilization – refolding and directed evolution of miniantibodies. The Laboratory has a representative library of human miniantibodies in phage display format. Miniantibodies to enterotoxins of staphylococcus were obtained and characterized. The role of the antibody format for specificity in a number of enterotoxins was investigated.

Toxicity analysis of enterotoxins and toxin-neutralizing potential of antibodies

The Laboratory in cooperation with the Laboratory of Biological Testing develops methods for valuation the toxicity of staphylococcal toxins and the toxin-neutralizing potential of antibodies to enterotoxins. As model animals they use mice grown in Nursery for Laboratory Animals. The approaches used are described in this paper.

In this work, we investigated S. aureus isolates using whole-genome sequence analysis and tried to establish a relationship of these isolates with the development of bovine mastitis in Russia. A set of virulence genes (enterotoxins, cytotoxins, superantigen like proteins, exfoliative toxins and others) was detected. The most prevalence factor associated with bovine mastitis in Russia we identified as cytolytic toxins, hemolysins (100%) and leukocidins (80%).

38% isolates were classified as toxicogenic by enterotoxins (there are seg, sei) which encoded by egc cluster.  Furthermore, we detect the possible connection of bovine mastitis problem in Russia with eta positive S. aureus. All S. aureus isolates were identified as MSSA. In addition, it was found that several of isolates have multidrug resistance, which could be confirmed by the presence of antibiotic resistance genes in these isolates. This work was carried out within the framework of grant 15-16-00020 under an agreement with the Russian Science Foundation. 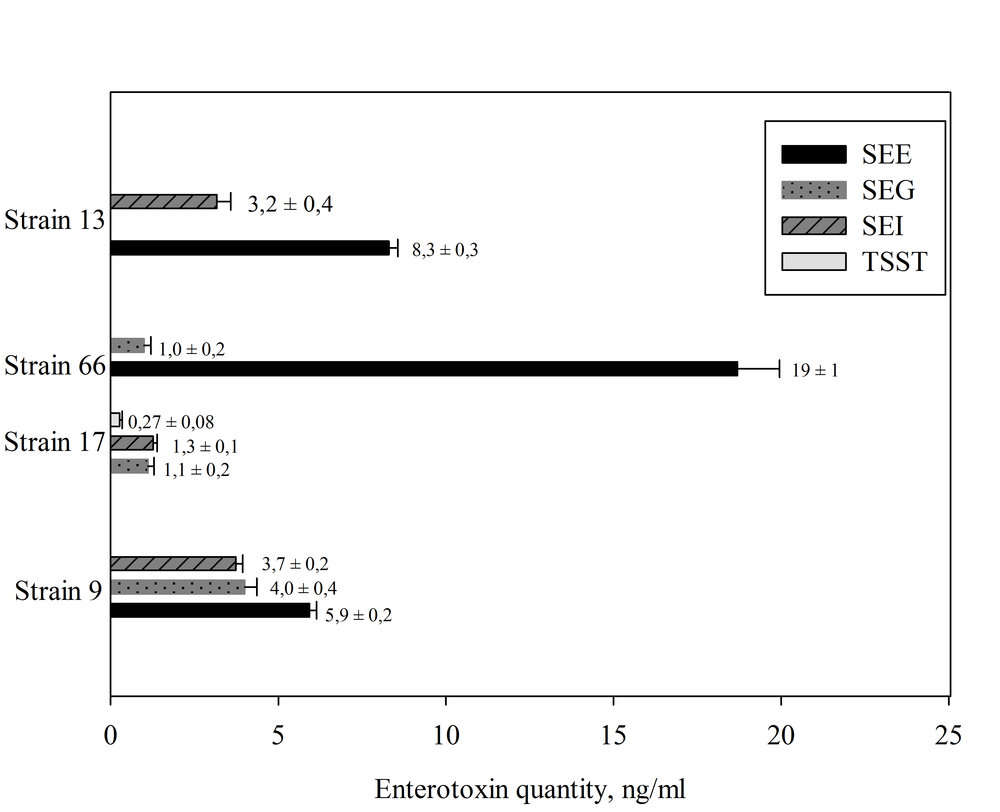 The spread and toxigenic properties of S. aureus associated with cow’s mastitis in Central Russia were investigated. Strains contained some pore-forming peptides and protein toxins were detected. The distribution of the genes of pore-forming toxins phenol-soluble modulins was determined: hla – 70%, lucS – 46.6%, psma – 81.6%, psmb – 95% and hld – 78.3%.

Five S. aureus isolates were analyzed by whole genome sequencing, annotated and registered in GenBank. The presence of various staphylococcal exotoxins was confirmed.

Research on the role of YB-1 protein in innate immunity reactions. 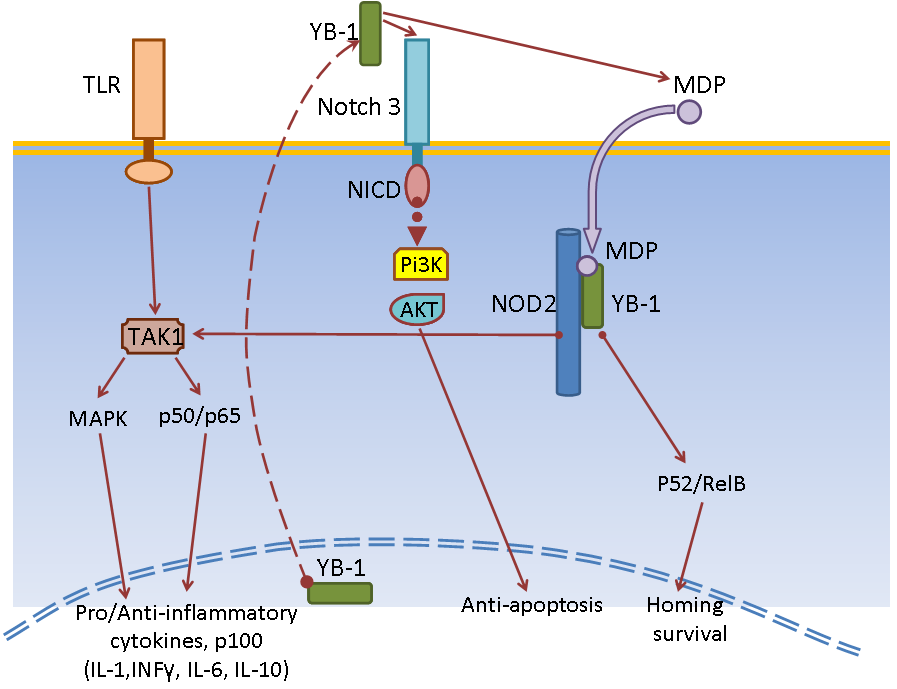 In the framework of the study number 59.8. "Research on the role of YB-1 protein in innate immunity reactions" the following results were obtained:

We confirmed that the bacterial cell-wall derivative GMDP potentiates the B cell response to Y. pestis V antigen'; centrally, we also report that a major binding target for GMDP, the host protein YB-1, itself has in vivo adjuvant properties, and that the combination of YB-1 and GMDP synergistically increased both B cell number and affinity for V antigen. Indeed, YB-1 was able to promote survival in mice receiving lethal challenge injection with E. coli, a model of acute bacterial sepsis, and recombinant protein administration to mice 12 h before lethal challenge with E. coli led to 50% long-term survival. The data obtained by us in an in vitro and in vivo model allow us to propose a scheme of biochemical pathways for the implementation of GMDP signaling in animal cells and the key role of the YB-1 protein.