Researchers at the M.M. Shemyakin and Yu.A. Ovchinnikov Institute of Bioorganic Chemistry of the Russian Academy of Sciences have collaborated with their colleagues from the A.N. Severtsova Institute of Ecology and Evolution in groundbreaking research work in which they discovered in lamprey the homeobox gene Anf / Hesx1, which is the most ancient gene in the existing living vertebrate. The research findings that they published in the Scientific Reports journal support the scientists’ hypothesis that the appearance of this gene in vertebrates created the conditions necessary for the emergence of the telencephalon.

The telencephalon (known as the ‘end of the brain’) is the anterior part of the brain that is characteristic only of vertebrates, including humans. It is from this section that such important structures as the larger cerebral hemisphere develop.

“All other types of multicellular animals do not possess pronounced anatomical structures that are similar to the vertebrate telencephalon,” explained Andrey Zaraiskii, PhD. and Professor, also the Head of the Laboratory of Molecular Bases of Embryogenesis of the Institute of Bioorganic Chemistry of the Russian Academy of Sciences. “This means that during evolution, the telencephalon developed only in the ancestors of modern vertebrates.

Aromorphosis is the term that scientists use to describe the emergence of the telencephalon during the evolution of the vertebrate. The term describes a major evolutionary change that leads to an overall increase in the level of organization of the body. In this regard, the question of the genetic mechanisms underlying this process becomes very important. Andrey Zaraiskii and his colleagues discovered a previously unknown homeobox (involved in the regulation of development) gene Anf / Hesx1 that is responsible for the inclusion of the telencephalon development process in representatives of several classes of vertebrates. Based on its absence in the entire invertebrate studied, scientists have suggested that the formation of the vertebrate telencephalon may be associated with the appearance of the Anf / Hesx1 homeobox gene in their ancestors. 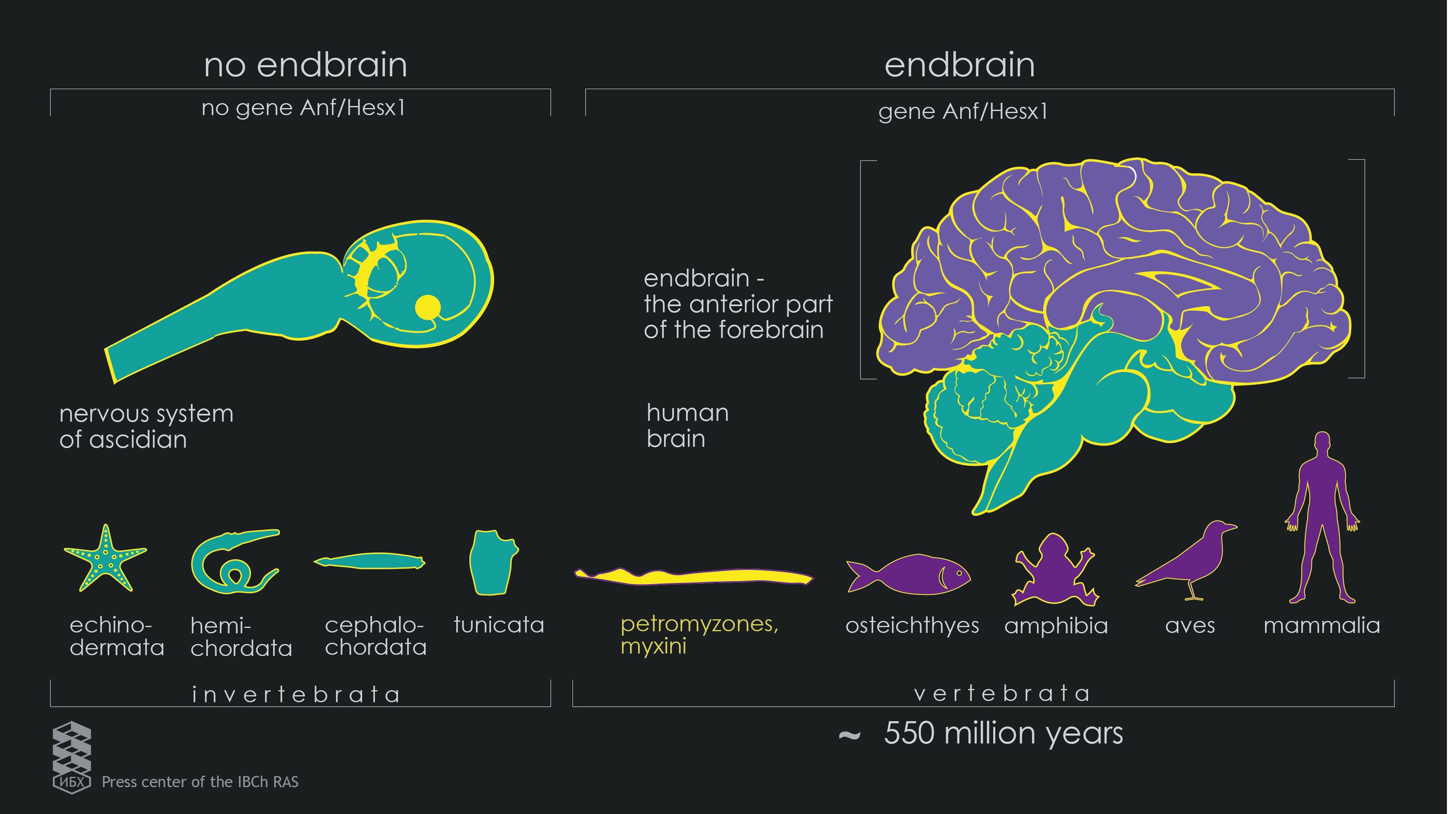 To confirm this hypothesis, the scientists had to demonstrate that the Anf / Hesx1 gene is present in all classes of vertebrates. However, until now, this gene could not be detected in jawless vertebrates (lampreys and hagfish), the representatives of the most ancient of living classes in existence. Other researchers recently conducted a genome sequencing (determination of the nucleotide sequence, DNA and RNA ‘building blocks’) of lamprey that also showed no presence of the Anf / Hesx1 gene in these vertebrates. In order to identify it, Professor Zarayskiy’s team used special approaches based on high-precision isolation of RNA from the cells of the telencephalon rudiment of embryonic lamprey. Consequently, they were able to clone the Anf / Hesx1 in three species of these animals. Simultaneously, by means of special experiments, the researchers demonstrated that in lamprey, this gene regulates the early development of the telencephalon, i.e. it performs the same function as in other vertebrates.

“We discovered in lamprey the most ancient living vertebrate, the homeobox gene Anf / Hesx1,” remarked Andrey. “This discovery is very important for confirming the hypothesis that we had previously put forward. We believe that the key event in the creation of the conditions necessary for the emergence in vertebrates, including ourselves, of telencephalon, was the development of the Anf / Hesx1 gene in their ancestors."

The confirmation that the gene carries out in lamprey the same function as that in other vertebrates suggests the universality of the early telencephalon development mechanism.