Venoms of spiders and wasps contain acylpolyamines that act as high-affinity blockers of ionotropic receptors for glutamate, the main excitatory neurotransmitter in the human central nervous system (CNS). The first representative of acylpolyamines, argiopin from the venom of the orb-weaver spider Argiope lobata, was discovered in 1986 by Eugene Grishin’s team at IBCh RAS. Here, an international team of scientists, including a researcher from IBCh RAS, has used cryo-electron microscopy (cryo-EM) to determine the first atomic structure of an argiopin-glutamate receptor complex. This structure will help to design new drugs for treatment of neurodegenerative diseases. The study is published in Neuron. 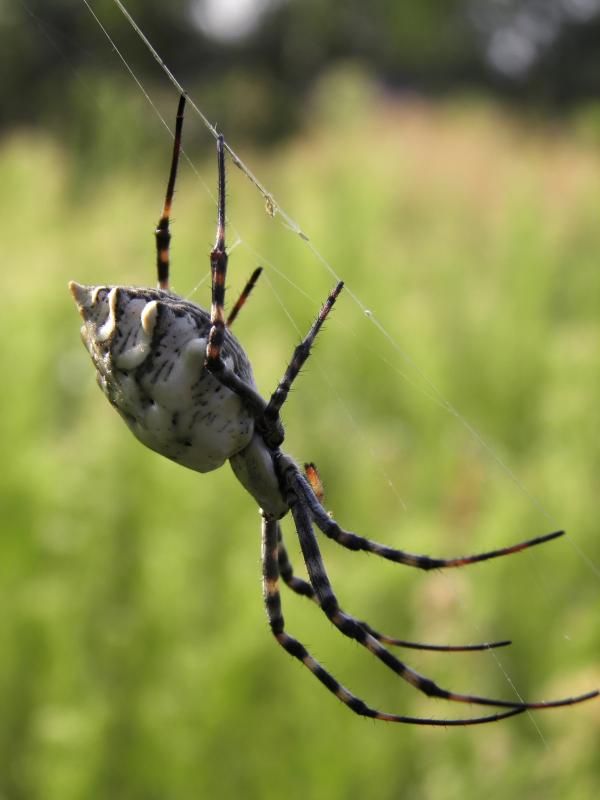 Photo made by Gleipneir @Dreamstime

Glutamate serves as a neurotransmitter in humans as well as other vertebrates and invertebrates, including insects. Whereas glutamate acts as the main excitatory neurotransmitter in the human CNS, it also serves as a mediator at the neuromuscular junction in insects. Ionotropic glutamate receptors in humans are ligand-gated cation channels. Certain types of glutamate receptor channels are permeable to calcium, and their increased activity causes neuronal death in a variety of diseases, including amyotrophic lateral sclerosis (Charcot's disease), epilepsy, Alzheimer's and Parkinson's diseases. Blockers that selectively inhibit calcium-permeable glutamate receptors are therefore important drug candidates.

Several types of spiders (e.g., orb weavers and funnel-web spiders) and wasps (e.g., beewolves) produce venoms that can block insect glutamate receptors, causing paralysis of their prey. The active compounds of these venoms are acylpolyamines. Each acylpolyamine includes an acyl "head" group of the size of a typical aromatic amino acid side chain and a polyamine "tail" representing a chain of amino groups connected by hydrocarbon bridges of different length. This class of compounds was first discovered by Eugene Grishin. In 1986, a group of scientists led by Eugene Grishin published a highly-cited article in Bioorganic Chemistry describing the first structure of acylpolyamine, so-called argiopin, which was extracted from Argiope lobata venom. This study was carried out in collaboration with the group of NMR spectroscopists led by Alexander Arseniev who determined the structure of argiopin and Lev Magazanik’s group of physiologists who characterized the effect of argiopin on insect glutamate receptor currents. Subsequently acylpolyamines were found to block the mammalian brain glutamate receptors.

The new study focuses on the molecular structure of complexes of a mammalian calcium-permeable glutamate receptor with three blockers, including argiopin and its two synthetic analogs. It turned out that the blockers penetrate into the open ion channel of glutamate-activated receptor, and place their positively-charged polyamine tail in a narrow negatively-charged part of the ion channel, its selective filter, which determines permeability of the channel to cations. However, the blockers cannot penetrate through the ion channel because of their large heads, which become stuck in the inner cavity of the receptor. With this knowledge of how toxins and their synthetic analogs bind and block glutamate receptor channels, chemists will be able to design new, more effective blockers. Such substances will prevent the disease-associated excessive entry of calcium into neurons, save them from excitotoxic cell death and restore the normal function of the CNS.

Structure of the complex between glutamate receptor and argiopin, the acylpolyamine toxin from the spider Argiope lobata. (A) Micrographs obtained by cryo-electron microscopy, where images of several molecular complexes are shown by green circles (left), and examples of 2D class averages of molecular complexes (right). (B) Structure of the receptor ion channel pore with argiopin molecule inside. Courtesy of Edward Twomey, a former student in Sobolevsky Lab, now a postdoc at Harvard University.

The work was performed by an American-Russian team, which included members of the Sobolevsky Lab (Columbia University, New York, USA) and Alexander Vassilevski (head of the Laboratory of Molecular Instruments for Neurobiology, IBCh RAS).