Researchers from the Biophotonics lab of IBCH RAS (Anastasia Mamontova, Konstantin Lukyanov and Alexey Bogdanov) designed a new green fluorescent protein that combines high fluorescence brightness and short fluorescence lifetime. They used a semi-rational protein evolution approach. Their collaborators from Bach Institute of Biochemistry and Semenov Institute of Physical Chemistry helped with the time-resolved fluorescence analysis (FLIM) that allowed characterizing the physical properties of this perspective probe. Research has recently been published in the Scientific Reports.

FLIM (fluorescence lifetime imaging microscopy) is an advanced fluorescence microscopy technique allowing distinguishing between the spectrally similar fluorophores by a time-resolved single-photon detection in each pixel. While in regular fluorescence microscopy multicolor labeling relies on the markers’ spectral diversity (with up to 4-5 existing separate colors), FLIM hardware also measures fluorescence signal decay kinetics that can differ substantially among the probes of the same color.

Fluorescence lifetimes of the fluorescent proteins (FPs) typically fit in a quite narrow range (of 2.5-3.5 ns) that complicates FP-based high contrast FLIM. While some progress in extended lifetime FP design was achieved (e.g. NowGFP with 5.1 ns), reduced lifetime proteins niche has remained free until recent moment. The reason for that is in almost strict correlation between fluorescence lifetime and quantum yield. Thus, known probes with subnanosecond lifetime have, most frequently, quantum yield of less than 10 %. Dim fluorophore means weak signal, extended scanning duration, and fluorescence data of a low quality.

Researchers from our Institute succeeded to obtain a mutant of the widely used EGFP, which has both high fluorescence brightness (circa 80 % compared to EGFP) and short lifetime (approximately 800 ps in vitro, and 600 ps in live cells).

«We attacked the particular GFP amino acid residues involved, according to the previously published quantum-chemical computations, in the excited-state electron transport. Because it is well known that fluorescence lifetime is highly sensitive to the different excited-state processes, including charge transfer. We made dozens of mutants, brute-forcing three key positions, combined the mutations, and finally ꟷ caught something interesting.» – Alexey Bogdanov, the paper co-author, tells. 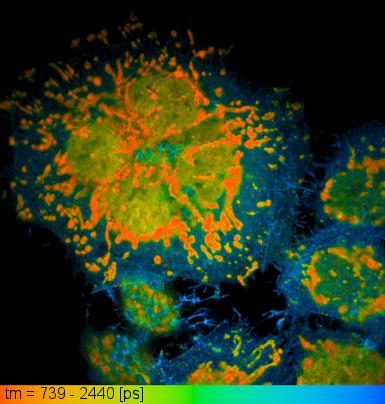 Practical utility of the new protein, which was called BrUSLEE (Bright Ultimately Short Lifetime Enhanced Emitter), was tested in a real-life FLIM experiment where three different GFPs were simultaneously imaged in live cells (see figure). It should be noticed, that BrUSLEE not only extends a palette of the lifetimes available within the genetically encoded fluorophores, but also opens the door for the new opportunities of a high speed FLIM, since the shorter fluorescence lifetime the higher laser repetition rate can be used for a specimen scanning.

«Our results have an impact not only to the applied field (new probe, photostable, bright and strongly contrast to all other GFPs in fluorescent lifetime, was made), they also ask the fundamental questions: what is the maximum quantum yield at a particular fluorescence lifetime, or vice versa, what is the minimum lifetime at a particular quantum yield?» – Anastasia Mamontova, the paper co-author, explains.