Scientists from the Department of Chemical Biology of Glycans and Lipids, the Department of structural biology and the Department of Biomaterials and Bionanotechnology IBCh RAS in collaboration with Russian and foreign colleges published a paper in ChemistryOpen on the study of conjugate of a biotin with DOPE (dioleoylphosphatidyl ethanolamine) and on its interaction with streptavidin.

The molecule shown in figure 1 is a biotin coupled to DOPE (dioleoyl phosphatidyl ethanolamine) by nontrivial spacer, CMG (made from oligoglycine, some of glycines are carboxymethylated). We invented this spacer in order to make lipophilic (due to DOPE) molecules water-soluble, including DOPE conjugates with hydrophobic peptides.

Both these conjugates, and biot-CMG-DOPE, remarkably integrate into living cells; and in seconds (by simple contact) they cover almost any surface - and this has become a universal way of biotinylation. 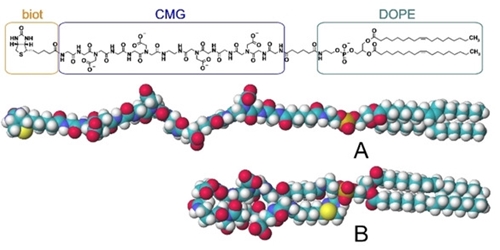 Molecular dynamics (MD) suggests that folded conformation B (see Fig. above) is beneficial for biot-CMG-DOPE, but not extended conformation A. But in the folded conformation, biotin should not be “visible” to streptavidin at all - neither in the cell membrane, nor in monolayer when the non-living surface is biotinylated. However, as mentioned above, biot-CMG-DOPE allows us to biotinylate almost everything, and at the same time, the biotin residue perfectly (always) interacts with avidins. How to resolve this contradiction? For this, the supramers formed by biot-CMG-DOPE were studied both experimentally and using MD. “Supramers” here are globules formed in aqueous media, as well as mono- or bilayers on surfaces. Physical methods gave consistent results on the size of the globules, and the small-angle X-ray scattering (SAXS) method allowed to decipher its organization, shown in the figure 2. 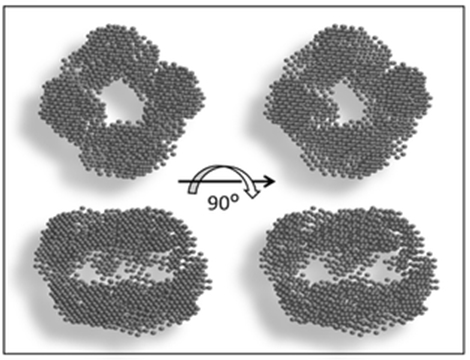 The seeming cavity is the core, mainly consisting of DOPE, that is, quite expectably, the globule is similar to a micelle. But MDS helped to understand where the biotin residues are located, see the following figure 3. 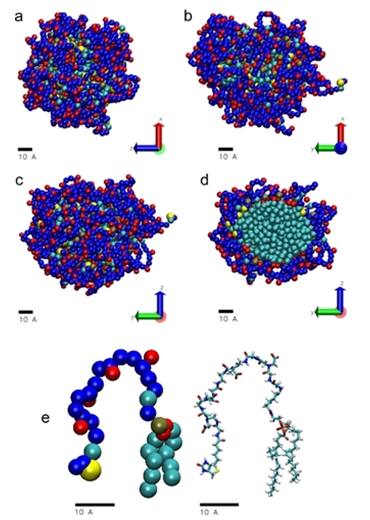 Fig.3. MD data for biot‐CMG‐DOPE supramer, in three projections: (a) ZX plane, (b) YX plane, (c) YZ plane; and (d) as a cross‐section of (c); (e) average conformation of single molecule when present in a micelle‐like supramer: left, coarse‐grained molecular, right, all‐atom model retrieved from the coarse‐grained one using VMD software. Biotin residues are in yellow, CMG fragments are in blue (carboxyl groups are in red), phosphate groups are in tan, hydrophobic fragments (mostly DOPE residues) are in pale‐blue

According to the MD, most of the biotin residues are in the hydrophobic core (see conformation B in the very first figure), but a small number of them are on the periphery and therefore available for interaction.

The most important for us was to understand architecture of flat monolayer formed by biot-CMG-DOPE. Found positions of DOPE and CMG here are basically similar to ones in the globule, as shown in the figure 4. 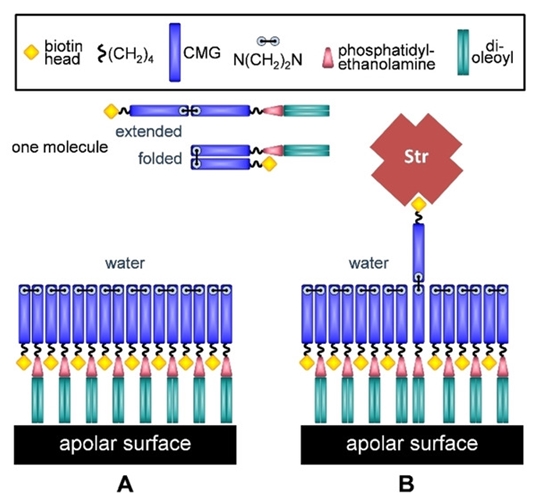 Fig.4. Predicted schematic of biot‐CMG‐DOPE coating of surfaces. A, monolayer on apolar surfaces; B, a pop‐up of unfolded molecule and its binding to streptavidin

However, almost all biotin residues are hidden here, and only every hundredth one is able to dynamically pop-up to the surface of the layer. This is enough to then (and the experiment confirms this) almost the entire surface was covered with a monolayer of (strept)avidin.

Why is all this interesting?

biot‐CMG‐DOPE serves as a universal bridge for the rapid and delicate modification of living cells with biotin and various (strept)avidinylated molecules under physiological conditions. For example, the red blood cells biotinylated with biot‐CMG‐DOPE were extracted using their biotin residue from blood after having been in the circulation for 24 hours, which opens up horizons for therapeutic in vivo technologies based on the modification of cells with biot‐CMG‐DOPE. As a consequence, it is important to understand the supramolecular organization of this molecule in the composition of the cell membrane, and also its potential ability to “hide” its biotin residues from biotin‐destroying blood enzyme and biotin‐specific natural antibodies, while still leaving biotin available for interaction.