Scientists from the Group of molecular tools for living system studies and Laboratory of molecular diagnostics (IBCH) together with the colleagues from Skoltech, the Federal Research Center for Physical and Chemical Medicine, Massachusetts Institute of Technology (USA) and Instituto de Química-Física Rocasolano (Spain) has developed a DNA modification, 7,8-dihydro-8-oxo-1,N6-ethenoadenine (oxo-ϵA), a non-natural synthetic base that combines structural features of two naturally occurring DNA lesions (7,8-dihydro-8-oxoadenine and 1,N6-ethenoadenine). 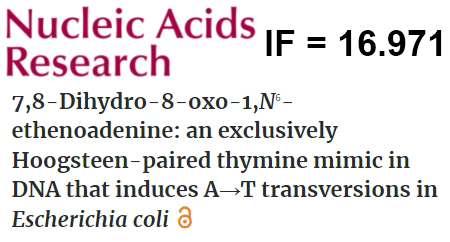 UV-, CD-, NMR spectroscopies and molecular modeling of DNA duplexes revealed that oxo-ϵA adopts the non-canonical syn conformation (χ = 65º) and fits very well among surrounding residues without inducing major distortions in local helical architecture. The adduct remarkably mimics the natural base thymine. When considered as an adenine-derived DNA lesion, oxo-ϵA was >99% mutagenic in living cells, causing predominantly A→T transversion mutations in Escherichia coli. The adduct in a single-stranded vector was not repaired by base excision repair enzymes (MutM and MutY glycosylases) or the AlkB dioxygenase and did not detectably affect the efficacy of DNA replication in vivo. The ability of oxo-ϵA to mimic the natural base thymine and regulate duplex stability, as well as its strong fluorescence and invisibility to enzymatic repair systems in vivo, are properties that may find application in the development of nucleic acid-based molecular tools and therapeutics. The work was published in Nucleic Acids Research (IF 16.971).