The Laboratory is engaged in development of composite adsorbents for bioseparation, model membranes based of monolayers and liposomes, immune dispersion diagnostic test-systems, biocompatible systems for enzyme and cell encapsulation and  systems for hybridizational analysis.

Development of novel polymer and polymercontaining composite nanomaterials based on porous and non-porous matrices for bioseparation and bioanalysis, and biocompatible nanocoatings (including techniques for modification of the implant properties). The work in under supervision of Dr. D. Kapustin

It is proved that the developed composites are useful not only for selective separation of mixtures of biomacromolecules (nucleic acids and proteins), but also effectively interact with complex supramolecular structures, such as viral particles (in particular, with RNA-containing shell viruses, with influenza virus B/Colorado/06/2017 similar to the virus B/Victoria/2/87. The decrease in the virus titer in virus-containing samples after passing through bioseparating elements with the developed composites was, on average, 2-3.5 lg TCD50/ml. In most experiments, the virus particles were completely retained.

The group cooperates with the research departments of the Institute, as well as with the Federal Center for Epidemiology and Microbiology named by N. F. Gamaleya of the Ministry of Health of the Russian Federation, with NPP "Technofilter" (Vladimir) and with a number of other institutes and companies.

The research of the group of Dr. A. Generalova is aimed at developing methods for producing polymer microspheres to solve various bioanalytical problems. In particular, recently A.N. Generalova and her colleagues developed:

Fig. 4. Inclusion of fluorescent CdSe / ZnS nanocrystals in polymer microspheres and their application in bioassay.

A decision to organize Polymers for biology laboratory was made in 1979 as a result of several discussions of Prof. V.P. Zubov and the director of the Institute of Chemistry of the Natural Compounds academician Yu.A. Ovchinnikov at symposiums and conferences. During these meetings they discussed an important role of chemistry of materials for the development of biology and medicine, a strong dependence of this scientific field on imported reagents and materials as well as a lack of specific departments for developing new materials for biology and biotechnology in our country.

The necessity to have high-purified concentrated samples of biologically active substances, in particular, biopolymers (such as nucleic acids and proteins) resulted in development of a number of effective sorption composite materials (adsorbents) combining the superior mechanical merits of solid insoluble matrix with unique sorption properties of polymer modifiers (primarily fluoropolymers and polyanilines). As it known, the most synthetic polymer materials are not suitable for use as “good” adsorbents due to certain properties (e.g. swelling ability, softness, low solubility or contrariwise, instability). Therefore, from practical point of view, use of polymer modifiers to obtain the composite materials seems to be an optimal way.

Advantages of use of the composite materials with nanostructural elements also were realized in producing of bioanalytical systems based on polymer particles containing various (fluorescent, chromophoric) labels. The methods of preparation of dispersions containing polymer particles based on polyacrolein were used to produce a number of labeled bioanalytical reagents for latex-agglutination reaction performing to determine different analytes, such as diphtherin, ferritin, herbicides (2,4-D, atrazine, simazine), antibodies to lipopolysaccarides containing in the cytoderm of opportunistic pathogenic bacteria, thyroglobulin, thyroid body peroxidase, antibodies to  mycobacteria of tuberculosis, etc.The work was carried out together with a wide range of scientific organizations (Mechnikov Research Institute of Vaccines and Sera, Russian Academy of Medical Sciences; Research and development center “Medical immunology”; Helmholtz Research Institute of Eye Diseases, etc).

An insistent task of tissue engineering is the search for materials that can be used as an alternative to allotransplants. A method was developed for producing of hydrogels with a biomimetic structure that simulates the perineurium/epineuria of the peripheral nerve. Anisotropic hydrogels are formed as a result of phase separation of chitosan-PVA compositions in the presence of a precipitant, accompanied by the formation of parallel-oriented channels. The obtained hydrogels are characterized by low cytotoxicity and provide directed growth of animal cells (C6 gliomas).

A new method of single-step DNA isolation from the soil samples for PCR diagnostics of phytopathogens. 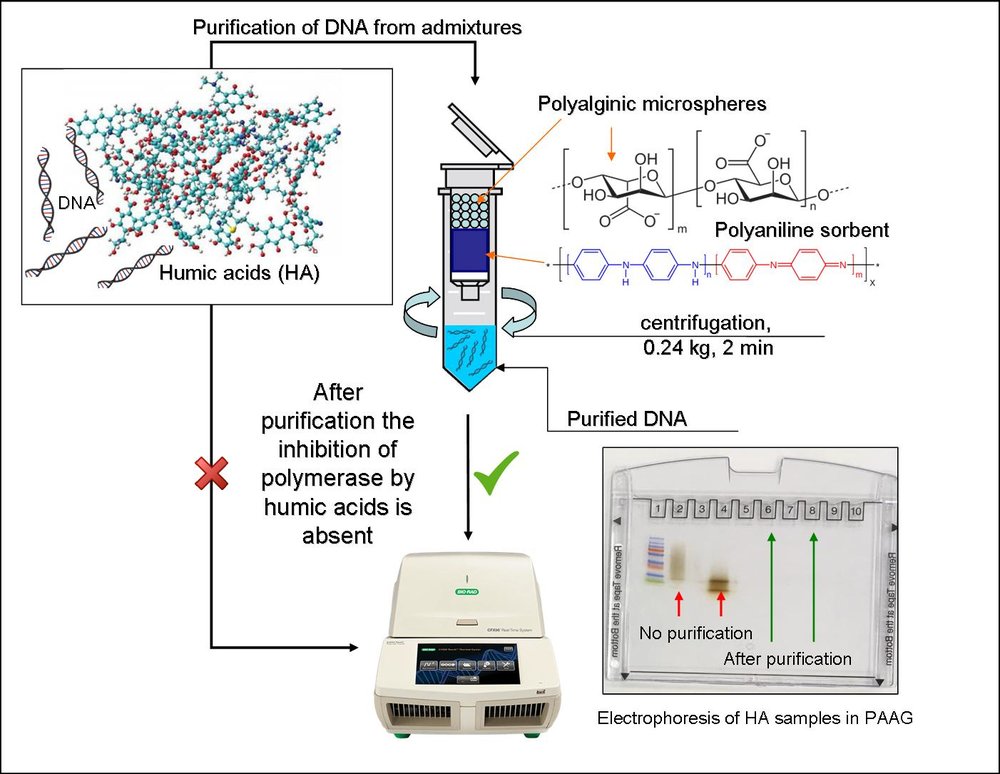 A new bioseparating element (BE) containing polyaniline-modified silica and polyalginate microspheres, providing one-step DNA isolation from the soil extracts with simultaneous purification of DNA from the fractions of humic acids, was developed for PCR diagnostics of phytopathogens. All sorption-active components of EB are manufactured in the laboratory using original methods.

The corresponding publication was prepared and scheduled for the first quarter of 2019 in Colloids and Surfaces B: Biointerfaces (IF 3.997, Q1). 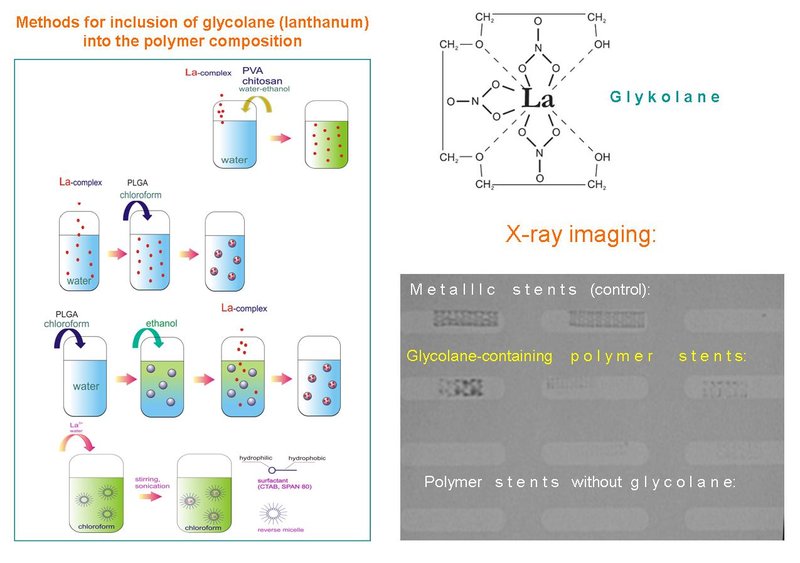 Biocompatible biodegradable polymer coatings (based on polylactic acid) included glycolane (or lanthanum) for use in a composition of polymer biodegradable vascular stents (and other polymeric implants) were developed. Due to inclusion conditions the coatings ensure an adequate radiopacity not only during the stent installation to the patient, but also after installation, and at the same time provides an additional positive effect due to the therapeutic properties of glycolane. Glycolane is a complex compound of lanthanum nitrate and triethylene glycol [La (NO3) 3 • C6H14O4 • mH2O], which demonstrates an antimicrobial effect.

The multichannel tip for extraction of nucleic acids, proteins and peptides.

A method of modifying the inner surface of the glass multi capillaries (MC) with nano layers of polyaniline, and a method of the manufactured MC-containing tips for mechanical dispensers utilization in DNA extraction procedure from blood for subsequent PCR-analysis were elaborated. According to experts from FGIH Russian Research Anti-Plague Institute "Microbe" the developed systems have been effective in the sample preparation procedure relating to DNA isolation from blood samples, in particular, to detect the strains of Vibrio cholerae and Yersinia pseudotuberculosis.

We report a new surface modification approach of upconversion nanoparticles (UCNPs) structured as an inorganic host NaYF4 codoped with Yb3+ and Er3+ based on their encapsulation at a two-stage process of precipitation polymerization of acrolein under alkaline conditions in the presence of UCNPs. The use of tetramethylammonium hydroxide both as an initiator of the acrolein polymerization and agent for the UCNP hydrophilization made it possible to increase the polyacrolein yield up to 90%. This approach enabled facile, lossless embedment of UCNPs into the polymer particles suitable for bioassay. These particles are readily dispersible in aqueous and physiological buffers, exhibiting excellent photoluminescent properties, chemical stability, and allowed control of the particle diameters. The feasibility of as-produced photoluminescent polymer particles mean-sized 260 nm for in vivo optical whole-animal imaging was also demonstrated using a home-built epi-luminescence imaging system.

As a part of R&D (Step 2) under the Agreement between the IBCh RAS and LLC “BIOSTEN” No 08.01.2014 from 28.08.2014 [in pursuance of to the Agreement with the Fund "Skolkovo" grant No 18 from 28 June 2011, assigned in the framework of the Innovation project "Development of multi purpose endovascular implants (stents) with the properties of biodegradation"] a new biocompatible and biodegradable polymer glycolan-containing coatings on the surface of the polymeric biodegradable vascular stents, as well as methods of administration of glycolan into the volume of the stent material were developed. Due to optimized conditions of glycolan inclusion, it provides satisfactory radiopacity not only during the stenting procedure, but also after the installation, and at the same time it provides an additional positive effect by virtue of the therapeutic properties of glycolan.