Researchers from the Laboratory of biocatalysis, Laboratory of proteolytic enzyme chemistry, Laboratory of bioinformatics approaches in combinatorial chemistry and biology, Laboratory of hormonal regulation proteins IBCh RAS together with their Russian and foreign colleagues showed that amplification of single DNA molecules encapsulated in a myriad of emulsion droplets (emulsion PCR, ePCR) allows the mitigation of this problem. Different ePCR regimes were experimentally analyzed to identify the most robust techniques for enhanced amplification of DNA libraries. A phenomenological mathematical model that forms an essential basis for optimal use of ePCR for library amplification was developed. A detailed description by high-throughput sequencing of amplified DNA-encoded libraries highlights the principal advantages of ePCR over bulk PCR. ePCR outperforms PCR, reduces gross DNA errors, and provides a more uniform distribution of the amplified sequences. The quasi single-molecule amplification achieved via ePCR represents the fundamental requirement in case of complex DNA templates being prone to diversity degeneration and provides a way to preserve the quality of DNA libraries.

The results of this study are published in PNAS. 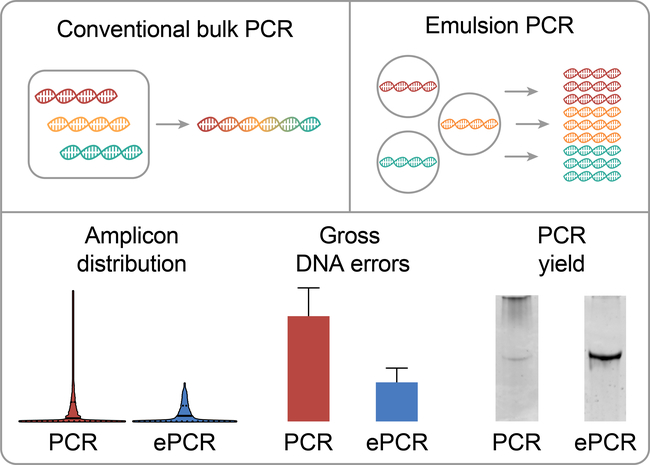