The discovery of fungal luciferin

Following their recent work on bioluminescence of earthworms, Yampolsky’s group of total synthesis of natural compounds and Laboratory of biomolecular NMR-spectroscopy at IBCh and their colleagues from Krasnoyarsk deciphered next — the ninth — luciferin structure. This one — from bioluminescent fungi. The work is published in Angewandte Chemie International Edition.

Ghostly light of tree trunks, called foxfire, which is often seen in the forest thickets, has been attracting attention since the time forgotten. The earliest accounts of this phenomenon are described in the works of Aristotle and Pliny. At the beginning of 19th century it became clear that fungal mycelia infestation is the cause of luminescence in decaying wood. From then onward many different species of luminescent fungi, producing light at various stages of development, were discovered in nature. For over a hundred years researchers from many countries have tried to unravel the mystery of foxfire. However, all the attempts to extract the components of fungal bioluminescent system failed again and again. At the time of his visit to Krasnoyarsk Nobel Prize winner Osamu Shimomura said: “It is very hard to get results. It is a hard work that takes a long time. In Japan and in the US those who encounter such difficulties usually find easier ways. Several times I proposed to conduct research on fungi in Japan and was refused. It is a very interesting topic, but the mechanism is too complicated. In nature there are three types of bioluminescence: first — the luciferin-luciferase system, second — the photoproteins, and the third — fungal... as of yet unexplored. Fundamentally new topics are always hard-won. I was primarily interested in the studies of luminescent systems of fungi and worms by Russian scientists. I believe they, who investigate the glow of earthworms, will be able to determine the structure of its luciferin, and I hope that they will make great progress in understanding of the mechanisms of fungal bioluminescence” [1].

Research team that has recently elucidated the structure of luciferin from earthworm Fridericia heliota — the eighth fully proven luciferin molecule known to man — has now taken up an exploration of luminous fungi [2]. As a result of joint effort of several labs (Laboratories of Photobiology and Nanobiotechnology of Instuitute of Biophysics RAS (Krasnoyarsk) and Yampolsky Research Group of IBCh RAS (Moscow)) a breakthrough in fungal bioluminescence studies was finally achieved. In their new research the structure of a novel unique luciferin — and its biosynthetic pathway from a precursor were established, as well as the data confirming a single biochemical mechanism of fungal bioluminescence was obtained. The new results are published in Angewandte Chemie Int. Ed. [3].

So how was this evasive luciferin finally extracted? The mechanism of fungal bioluminescence suggests the formation of luciferin from a certain precursor. In the course of this work it was established that luciferin precursor is also present in non-luminous forest fungi, more importantly it is about a hundred times more abundant than in the biomass of luminous species. Therefore, it made sense to extract the precursor from non-luminous fungi. The application of soaking the mycelium in distilled water overnight led to a dramatic increase in concentrations of preluciferin as well as the enzyme that converts the precursor into luciferin in the extracts.

Six compounds were obtained from the extract of non-luminous fungus Pholiota squarrosa using HPLC. Their structures were then determined by NMR and mass-spectrometry. Among these compounds hispidine turned out to be the most active in bioluminescence tests. Later experiments conducted by the research team of Yuichi Oba from Nagoya University (Japan) confirmed that hispidin is a universal luciferin precursor in other fungi. 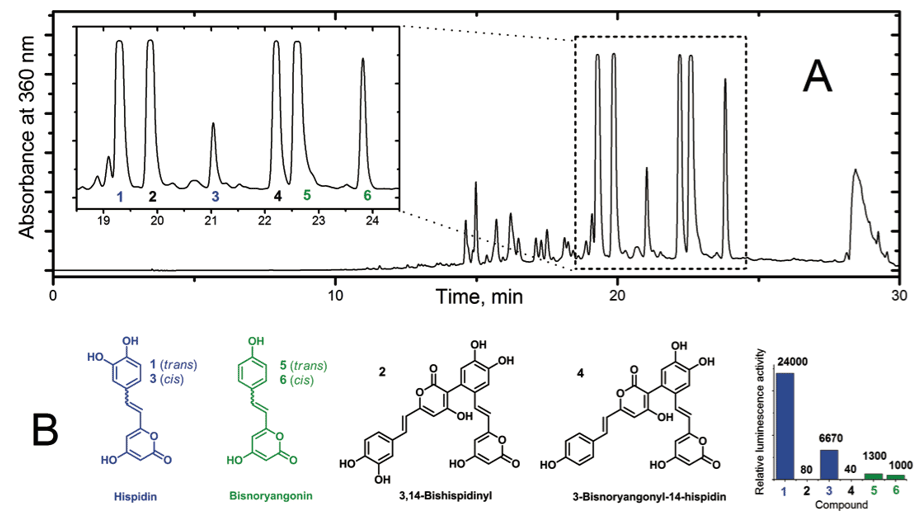 Figure 1. A) HPLC spectrum of fungal extract. B) The structures of six purified compounds and their luminescent activity.

It should be pointed out that in 1998 Hideshi Nakamura in a private message to Osamu Shimomura suggested that the structures of all possible luciferin precursors should contain one common fragment — caffeic acid, which means that he was one step away from discovery of the role of hispidin [4].

Further experiments showed that the NADPH-dependent enzyme converting hispidin into luciferin is not the anticipated reductase, but hydroxylase. The extraction of this enzyme allowed the acquisition and structure elucidation of luciferin itself. Thus it could be concluded that fungal bioluminescent system involves two substrates: luciferin precursor (hispidin) and luciferin and two enzymes: hydroxylase, that converts the precursor into luciferin, and luciferase that promotes oxidation of luciferin resulting in the emission of light.

In conclusion the trilling mystery of fungal bioluminescence was solved and the words of Osamu Shimomura proved to come true. Novel bioluminescent system was described and new substrate became the ninth of the known luciferins. We believe that this new luciferin will find its application in bioimaging as well as in other fields of applied bioluminescence.