Receptor tyrosine kinases play a key role in regulation of cell proliferation and differentiation, as well as of cell migration and metabolism. Until now, it was thought that all ligands of these receptors are of protein or peptide nature. However, a recent study conducted by a group of IBCh RAS researchers led by Dr. Alexander Petrenko identified a receptor tyrosine kinase that works as a sensor of mildly alkaline media, i.e. it activates in response to increase in concentration of extracellular hydroxyl-anions. Notably, this receptor has previously been considered as orphan with its ligand not found.

The generally accepted paradigm is that a multipoint macromolecular ligand-receptor interaction is required to trigger dimerization-induced activation of a receptor tyrosine kinase (to date there are 58 of them have been discovered and grouped into 20 subfamilies; Fig. 1) [1]; in the unique case of the insulin receptor minifamily the subunits are pre-dimerized by disulfide bonds and require allosteric activation by a ligand. The members of this minifamily are three highly homologous receptor tyrosin kinases — the insulin receptor, the insulin-like growth factor receptor and the insulin receptor-related receptor (IRR), previously considered “orphan”. IRR was discovered in 1989 by cloning of its cDNA which is homologous to the cDNA of the insulin receptor. Since then, many laboratories and pharmaceutical companies spent significant efforts trying to understand its biological function and searching for its natural ligand-activator, however without much success. 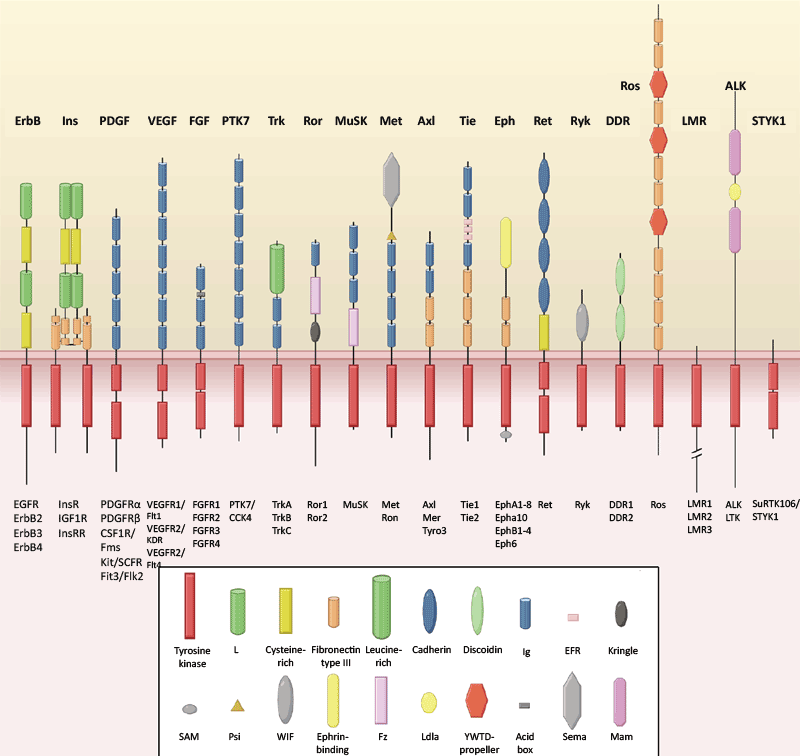 In a recently published paper, a group of Russian scientists, together with their French and Italian colleagues, describe the discovery of IRR agonist that appears to be hydroxyl-anion, thus IRR works as an alkali sensor that regulates excretion of excess alkali from the body [2]. Alkalization of the organism internal fluids, termed alkalosis, may result from either special diets such as vegetarian or milk-fed, or from infectious and somatic diseases, as well as respiratory abnormalities, decompensated pathological alkalosis being a life-threatening condition. The published study identifies IRR as a pH-dependent regulator of alkalosis compensation and a key, previously unknown component of the acid-base balance maintenance system.

The key experiments, conducted in the Laboratory of receptor cell biology of the Institute of Bioorganic Chemistry by Dr. Igor Deyev, demonstrated that the activation of IRR by hydroxyl-ions (OH−) has all typical features of the ligand-receptor interaction. IRR activation is specific, as its close homologs — the insulin and IGF receptors, as well as the EGF receptor, — do not react to pH changes. The activation of IRR by hydroxyls is dose-dependent and demonstrates strong positive cooperativity. In response to the interaction with hydroxyl-ions, the receptor molecule undergoes substantial conformational changes. As revealed by experiments in collaboration with a group of scientists from the Institute of Cytology RAS (led by Academician Nikol’sky), IRR autophosphorylation triggers intracellular signaling similar to the insulin signaling pathway (Fig. 2). Scientists of the Laboratory of biomolecular modeling headed by Professor Efremov succeeded in defining the extracellularly exposed domains of the receptor that are key determinants of its activation by alkali. 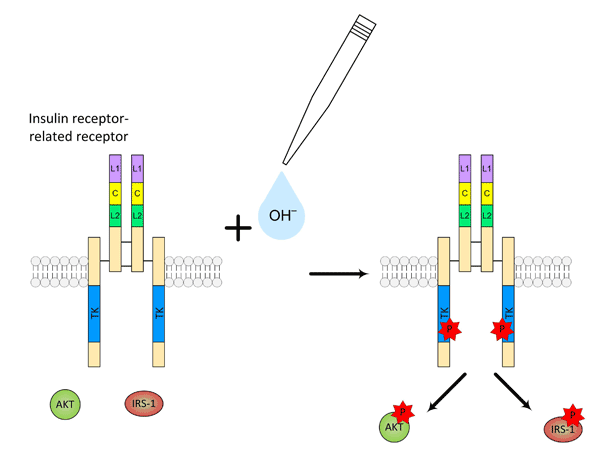 To elucidate the physiological role of IRR, a mouse line with inactivated IRR gene was established in the animal facility of the Branch of IBCh in Puschino. In collaborative experiments of the Laboratory of biological testing of IBCh (headed by Dr. Murashev), together with French (Prof. Dominique Eladari) and Italian (Prof. Eugenio Bertelli) colleagues, these knock-out mice were shown to have defects in physiologically normal compensatory response to experimentally-induced alkalosis that are primarily based on insufficient kidney excretion of excess bicarbonate.

Importantly, IRR is activated at pH >7.9. This value is out of the physiologically valid homeostasis range, however, the actual pH values characteristic for specific extracorporal fluids remain poorly studied. Unlike its ubiquitously expressed close homologs — the insulin and IGF receptors, IRR is predominantly found in the kidneys, pancreas and stomach. Precisely, these organs are known to secrete alkali in the form of bicarbonate that makes it possible for IRR to come in direct contact with mildly alkaline media.

Currently, IRR represents a unique example of an alkali-activated metabotropic type receptor. Identification of IRR as an alkali sensor is likely to open a new chapter in the field of the acid-base equilibrium regulation.